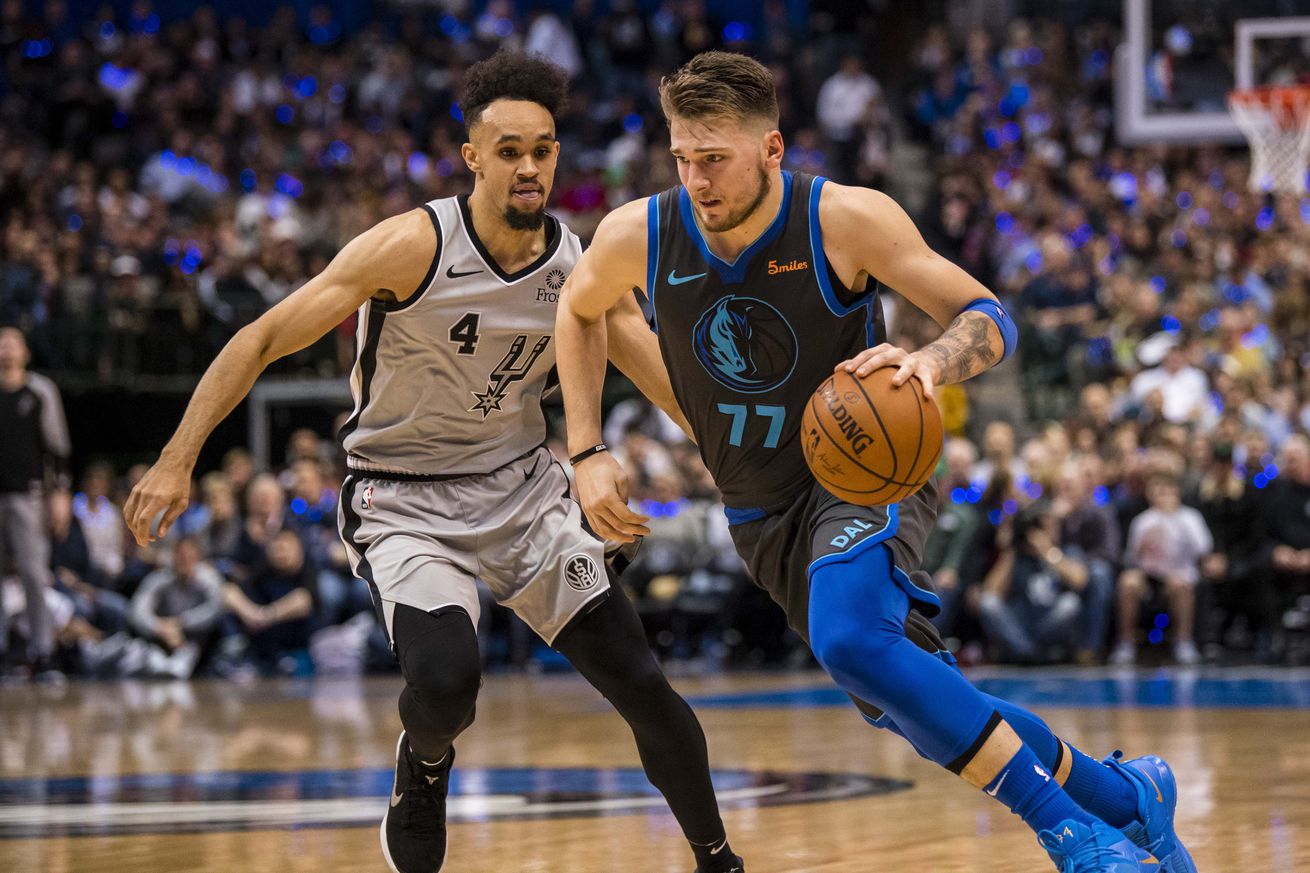 A lot has happened since the Spurs and Mavericks met the first time this season on October 29th. The Spurs have been both the worst team in basketball and the best at different points, while the Mavs have dealt with their own share of ups and downs. One thing that hasn’t changed, though, is the Spurs’ seeming inability to defend the Mavs’ Spain Pick and Roll.

In their overtime thriller in late October, the Mavericks turned to that one play over and over again to great effect. Ben Falk detailed how they employed it in the 4th quarter and overtime over at Cleaning the Glass. Spoiler: The Spurs didn’t do a great job.

The Mavs ran it on the 2nd play of the game on Wednesday night.

The Mavs run a little setup action to get everyone into the right place, with a pass to the wing and an off-ball screen between Luka Doncic and Harrison Barnes. Once that’s complete, Barnes heads into the paint before circling back up to set a backscreen on LaMarcus Aldridge. Meanwhile, Doncic gets the ball back then heads to his left for a pick and roll with DeAndre Jordan.

LaMarcus shows on the screen, buying time for DeMar DeRozan to switch from Barnes to Doncic then recovers back to DeAndre. DeMar makes the entry pass to DeAndre as difficult as possible and Bryn Forbes helps on the roll out of the weak side corner. It’s actually pretty surprising that Doncic didn’t hit Matthews on this play, though if Jordan makes a clean catch, this is 2 points right away. Still, it’s clear the Mavs have compromised the Spurs’ defense.

One thing to note is that Derrick White appears to be late recognizing and executing the switch. He trails Doncic until he runs into LaMarcus before recovering back to Barnes. That could be poor communication or a part of the Spurs’ plan, designed to get the ball out of Luka’s hands and force other players to hit shots, but it will be a problem later on.

Once DeAndre has the ball down low, the Spurs are in trouble, but LaMarcus and Bryn do a good job of covering him up. He’s almost able to kick it out to Wesley Matthews in the corner, but Bryn deflects the pass. That forces Matthews to drive. He kicks it out to Doncic on the left wing and Rudy Gay runs him off the line. The Spurs have recovered nicely at this point, and are in good position to cede a somewhat contested running floater, not a bad result given how much damage the play did.

Unforunately, LaMarcus is whistled for what looks like a clean block.

The Mavs ran it again in the 2nd quarter.

LaMarcus drops deep to get under the backscreen from Dorian Finney-Smith this time, making the timeliness of the guard switch critically important. DeMar doesn’t get out to Doncic as quickly as he should and Derrick trails too far again, leaving Finney-Smith open on the right wing. There’s not much of a reason to switch if both players are going to be this late, though.

When the Mavs turned to the Spain PNR midway through the 4th, though, the Spurs were finally prepared.

The Mavs don’t employ a setup action this time, which helps. LaMarcus gets around the backscreen and DeMar jumps out to pick up Doncic. Derrick peels off after the screen and arrives at Barnes just as the ball does, forcing him into a contested drive and difficult dump off to Jordan, which Derrick steals.

This isn’t perfect defense, but it’s much better. Doncic probably should have pulled up for a three off the dribble, but he doesn’t yet know that Derrick is peeling off, so it makes sense that he continues to drive.

Most teams in the NBA employ some version of this pick and roll action, and the Spurs have defended it relatively well against most, at least over the last month and a half. But for some reason, the Mavericks are able to continually expose holes in their coverage with little variation. Some of that is good coaching and execution, and some is just Doncic being great.

This is a difficult play to defend and there’s not yet widespread agreement on the best way to do it, but the Spurs shouldn’t need until the 4th quarter of their 2nd meeting to just execute the defense they’ve chosen to play. Still, they got it done just in the nick of time, and Derrick’s steal, combined with LaMarcus’ hustle and a great play from DeMar in transition, put the Spurs up 6 with just five and half minutes to go.