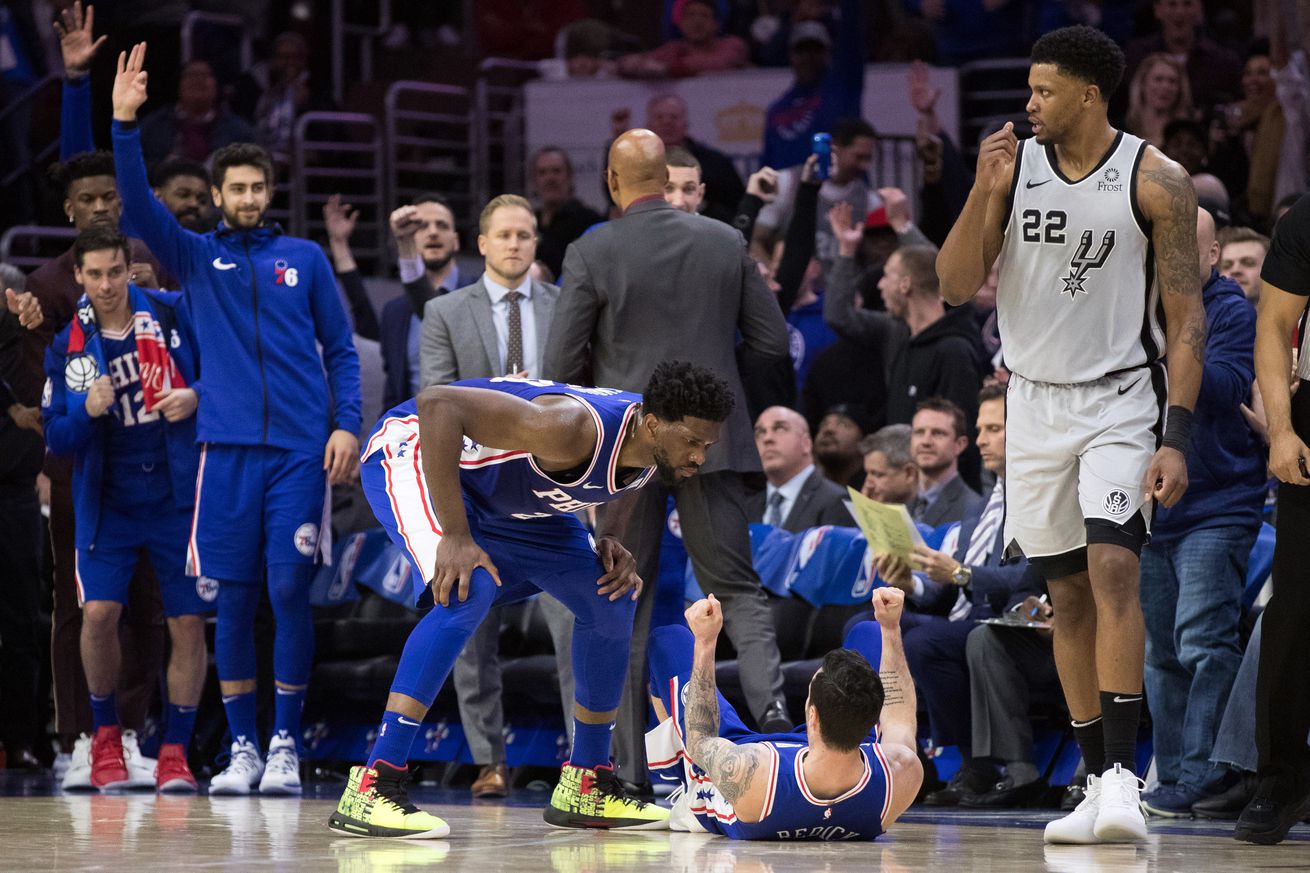 It’s not often that San Antonio has difficulty shutting down someone it wants to.

The Spurs dropped a winnable game to the 76ers on Wednesday night. While the topic du jour is the team’s collapse down the stretch, the team should be at least as concerned about yet another poor start. Just in the first and last 2 minutes of the game, the Spurs gave up 18 points and scored only 3.

They’ve generally performed just fine in clutch time (last 5 minutes of a game with the score within 5 points), with a record of 12-11 in those games and a point differential, even after last night’s debacle, of -1. That’s not great, but they’re not regularly getting blown off the court like they were in this game.

In between their rough start and fatal finish, the Spurs actually played some pretty good basketball, outscoring the 76ers 117-104 in those 44 minutes. That counts for exactly nothing in the standings, but it’s important to consider with respect to evaluating the team.

Part of their success was a defensive game plan that depended on their ability to guard Ben Simmons and Joel Embiid with little to no help. LaMarcus Aldridge, in particular, did an excellent job handling the 76ers’ All-NBA center. Though Embiid was hampered to some extent by a bad back, LaMarcus’ post defense on him still deserves a lot of credit. Embiid posted up 9 times on the night, and scored just 1 point on 6 shots.

Some of those are shots he can hit. At least a few of the off-balance bunnies and hooks will fall on most nights, but those aren’t Embiid’s typical diet of looks out of post ups, and LaMarcus made him work to even get those.

The Spurs used a much more varied approach to guarding Simmons. Rudy Gay took the job from the tip, but after getting 2 quick fouls, was replaced by Dante Cunningham less than 4 minutes into the game. Dante held it down for most of his 10 minutes of playing time and Derrick White and Rudy split the responsibility for much of the rest of the game. None of them were able to do much more than slow Simmons down, though that’s really all the Spurs expected.

The team needed someone to be able to check Simmons the way LaMarcus handled Embiid, because the rest of the team’s focus was bent towards trying to keep up with J.J. Redick, something they abjectly failed to do time and again. That may sound like an odd thing to say about a player who put up 19 points on 16 shots, but take a look at what he did to San Antonio’s defense.

Redick comes off a down screen from Simmons looking for a dribble hand off from Embiid as he heads to the right wing. All 3 Spurs’ defenders involved in the play try to go with Redick, leaving Simmons – a guy who finished 4th in all-star voting for Eastern Conference guards – all alone for a wide open roll to the rim.

Another dribble hand off from Embiid to Redick results in a double team, with both LaMarcus and Bryn staying on him. Derrick White races in to stop the lob to Embiid, only for Redick to hit Landry Shamet for a wide open corner 3. Shamet deserves credit for knocking them down, but all 5 of his looks from three on the night were wide open, with the nearest defender more than 6 feet away, and a lot of that had to do with the way Redick’s movement and shooting distorted the Spurs’ defense.

This is fascinating. Redick destroys the Spurs’ D without even moving. It’s a clear miscommunication between Bryn Forbes and Patty Mills caused by their shared concern for ensuring Redick isn’t open for even a moment.

This is the one you remember, and it’s the one time the Spurs didn’t tilt their defense towards Redick. Clinging to a 3 point lead with just over a minute left, the Spurs have finally prevented a transition bucket and forced the 76ers into their halfcourt offense. The 76ers run a pick and pop with Simmons and Redick and Rudy hangs in close to Simmons for just a beat too long.

Marco acts like they are switching this action, which makes a lot of sense given that there’s less than 10 on the shot clock and they clearly don’t want to give Redick even a sliver of daylight. That’s not how Rudy plays it, though, and he rightly gets the blame, especially since he ran through Redick’s landing space.

Redick’s game is really impressive, and there’s a ton of nuance to how he moves around the court. For Bryn, guarding him is probably a nightmare, but also a valuable experience. There’s plenty here to learn about how to attack screens and manipulate the coverage with clever angles and unpredictable movement, all while leveraging his hair trigger and incredible accuracy to stretch the defense until it breaks.

Redick’s effect on opposing defense’s isn’t limited to just the Spurs. He’s got the 2nd best +/- on the 76ers and he’s the only player in their top 9 five player lineups. The Spurs tried to defend him several ways in this game. They tried only switching on ball actions, switching everything, and double teaming or late switching on ball actions, but none of it kept Redick from scoring, and every breakdown gave another 76er an open look.

In the end, it was just too much, and despite scoring 122.4 points per 100 possessions, an outstanding mark, the Spurs came up a bucket short. They made some poor decisions down the stretch, essentially running a ball control offense instead of continuing to attack, but they also caught a bad break. As mentioned by Mo Dahkil, and confirmed by the league’s Last 2 Minute Report, this is a foul.

Not a lot of analysis here but the refs missed an obvious foul, Chandler is holding Gay when he tries to catch the pass. pic.twitter.com/JTDWeKE7Ji

There’s no guarantee the Spurs score here if Rudy is allowed to catch the pass, but at least they would’ve had a chance. Of course, missed calls like these happen all the time, though this was the only one mentioned in the report for this game, and they happen to every team. The Spurs still had a chance to win the game with some better decision making and execution, but it’s hard to knock them too hard for almost stealing an away game from a really good team, especially when there is so much room for improvement.