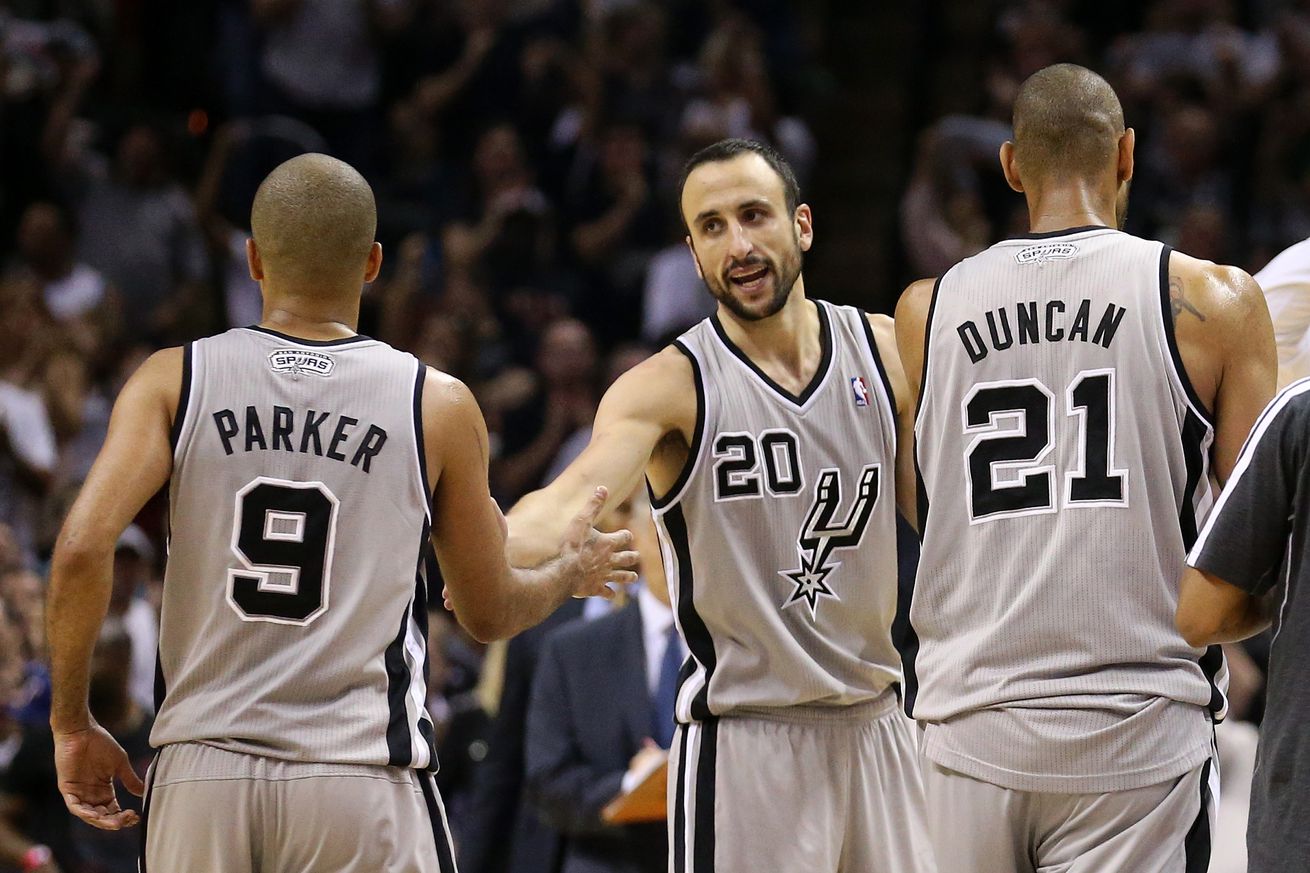 There are several recognizable silver linings in the Alamo City.

This offseason has brought a series of changes to the San Antonio Spurs franchise. On July 18th (a day that will live in Spurs-ian infamy) PATFO traded Kawhi Leonard to the Toronto Raptors for DeMar DeRozan, Jakob Poeltl, and a (top-20 protected) first round pick. My first reaction was almost entirely one of pure and absolute relief. I can’t remember any Spurs offseason feeling like it was moving at such a sluggish pace, and like most fans I’m just happy to get it behind me.

But then came the panic. Outside the tsunami of articles and television commentary came an endless surge of my own questions. Is this the best we could do? How is this amount of turnover going to affect the roster? Is it even possible to field an above league average defense having lost three of our best perimeter defenders? Where are we going to find the spacing for LaMarcus Aldridge and DeRozan to operate? What does this do to our overall offensive flow? Have we just made a terrible and irreversible mistake?

In a basketball world driven by the modern news cycle, it’s not hard to get worked up like this. In fact, that’s decidedly the intent of most news media today. Working up your audience emotionally is its own dark form of self-propagating publicity, and even the best of us are vulnerable to it in the moment. And with the NBA currently finding itself trapped in a never-ending cycle of Golden State dominance, story-lines are being dredged up out of even the most innocuous of controversies (like say, a Danny Green groin injury…).

So, it’s not exactly hard to grasp why a trade that should have been cathartic for the vast majority of the San Antonio faithful was turned on its head by an estimable number of talking heads who never much cared for the Spurs to begin with. The modern NBA craves the fall of a stable and non-controversial franchise because in its current state, the modern NBA craves parity for parity’s sake.

We as Spurs fans should know better. After 20 years of watching sports ‘analysts’ salivate over even the slightest hint of contentiousness in Alamo City, this last year provided the sort of controversy some had been craving, and delivered it on a silver platter. It should come as no shock that after having dined on it to their satisfaction they should collectively lean back at the table, loosen their belts, and glowingly predict an inevitable team collapse for dessert.

But having now had enough time to absorb the nonsense and more fully contemplate the plethora of changes that have occurred, I’ve got news for us all: this team might be better than we thought.

Now, I know by this point we’ve all seen the numbers and predictions coming out of Vegas and various gambling agencies. Betting on the Spurs to win less than 45 games seems like an idiotic premise to begin with, but once I sat down and really took a look at the Spurs’ collection of players, it seemed even more so. In fact, when all is said and done, betting on fewer than 50 wins might end up looking almost as foolish.

This team (contrary to what some stats and the laws of personnel turnover are currently telling us) might actually be an easier team for Pop to assemble and deploy than last year’s, because the configuration of this team is quite recognizable.

If you squint just enough, you can see the linchpins of this roster coming together to take on an awfully familiar shape: There’s a center masquerading as a power forward, who’s just as formidable a threat from 15-20 feet as he is down low; a slashing shooting guard who’s not only capable of exploding for points at any given moment, but is also an emerging master of the drive-and-dish; and a young point guard with an inconsistent jumper and the ability and speed to get to the hoop at will.

Now I’m not saying that I believe that this current iteration of the Spurs roster is going to be the equivalent to the holy Spurs triumvirate, but what I am saying is that, more and more, I am beginning to suspect that this trade with Toronto was a very specific choice on the part of PATFO, as opposed to simply being the best return they could manage.

Pop coached a similar combination of talents for the better part of 15 years and had a remarkable amount of success with them. So, why would it be shocking to find that, out of a grouping of potential trade suitors, Pop and R.C. opted for a player they felt they could integrate seamlessly in regards to team chemistry and strategy?

The comparisons aren’t perfect, of course, because that’s not how individuality works. Until now, DeRozan’s been a league average defender at best and – as has been pointed out many, many times – his three-point shooting could use some work (although it’s worth mentioning that until last year he hadn’t shot worse than .385 from the corners for four straight seasons.)

While Aldridge’s defense has greatly improved since arriving in San Antonio, he’s not yet Tim Duncan in that regard — though he’s capable of flashing some legit passing skills occasionally

And, of course, Dejounte Murray’s ability to get to the hoop hasn’t quite generated many points yet, and certainly not at Tony ‘The Teardrop’ Parker’s level.

But the fact remains that this is all awfully reminiscent of a trio that Gregg Popovich has 15 years’ worth of specific tactics and plays already drawn up for. Even discounting improvement from these players as well as others on the roster, 45 wins looks more like the floor than the ceiling from a group that managed 47 with only one dreadnought scoring threat on the court. And to be perfectly honest, I think DeRozan will be less of the offense clogging iso-player that Kawhi has been since Timmy’s retirement. For all of Kawhi’s extraordinary talents his passing was always pretty pedestrian, and in recent seasons the Spurs’ ball movement has taken multiple giant steps backwards.

Looking back on last year’s team, falling short of the accustomed 50 regular season wins seems mostly to have been due to a combination of physical and psychological exhaustion, injury, and offensive futility. If anything, the Spurs were as defensively dominant as ever. Nasty scoring droughts in the fourth quarter cost the team at least seven wins by my count, and arguably several more. An extra 20-25 points in those games (certainly the ones the Spurs already had the lead in) would have likely been the difference between the 47 wins they managed, and the 54 wins that were practically in their grasp.

As for the team’s defensive losses, I feel they may be a bit overstated. Sure, when you see the names Kyle Anderson, Danny Green (that one still hurts), and Kawhi Leonard on the outgoing players list, it seems like a lot, but the reality is that we really only lost Kyle and Danny. The effect of Kawhi Leonard on the Spurs’ defense has been purely theoretical since March, and on the whole he had practically nothing to do with last season’s defensive ratings. Also, when you consider the addition of Jakob Poeltl and Dante Cunningham, as well as Dejounte Murray’s still improving (yet already All NBA) defensive skills, things don’t look so bleak.

In Cunningham, the Spurs may have found a Bruce Bowen-lite forward. He can knock down corner threes and has the ability to defend smaller centers, most forwards, as well as some larger/slower guards, making the comparison at least worth mentioning.

In Poeltl, the Spurs have, at last, acquired what they were sorely lacking last season: a dependable and complementary big man, with upside, who could be an asset on both defense and offense. His shot is limited, but he’s an excellent screener and already a pretty good passer for his position.

In particular, the Poeltl addition has the potential to be a much bigger deal than it seems at the moment. Most of the Spurs’ defensive woes last season came on the interior, when Joffrey Lauvergne was either the sole big man on the court, or, rather unfortunately, paired with Pau Gasol. The Spurs were almost nine points-per-possession worse on defense last year with Lauvergne on the court (a difference between the fourth ranked defense in the NBA and dead last), which rather unsurprisingly led to a significant decrease in his playing time (although to be fair, he did suffer injuries to his hand and an ankle). This forced the Spurs into the position of either playing small ball, or playing Gasol and Aldridge for longer than recommended, leaving them both gassed by the fourth quarter.

Poeltl’s presence should now allow for Gasol to contribute in smaller bursts. It will likely help balance the court defensively when they’re paired together, and should also allow Aldridge to conserve more energy on the defensive end, in addition to granting both of the older players a little more bench time.

All of these positive changes aren’t even taking into account the various off-season improvements that may have occurred in the games of Davis Bertans, Bryn Forbes, and Derrick White. Nor do they account for the return of Manu Ginobili (God, please let me have this one), Marco Belinelli, Patty Mills, and a healthy Rudy Gay. And I haven’t even mentioned rookie extraordinaire Lonnie Walker IV, who has already earned a Manu comparison from Pop (no big deal).

What I’m trying to say is that while there has been a great deal of change in the past few months, not all (perhaps not even most) of it has been bad. This Spurs roster is far from depleted, and in a number of ways has actually been improved.

Do I miss Tony, Danny, and SloMo? Absolutely. But with the addition of some fresh (and talented) new faces, and the perpetual exhaustion of the Kawhi saga behind us, I have to say things are looking awfully sunny in Alamo City, and that’s not just the tequila talking.

If DeMar DeRozan’s defense improves in the manner of most Spurs newcomers (Aldridge and Gay both improved their defensive ratings by roughly four points or more in their first seasons), and Murray’s jumper solidifies, this team could end up out-doing much more than the also-ran predictions that have become so trendy. There’s no motivator like being underestimated, and this roster has that in spades. And as for that behemoth out in Golden State? Well, I have it on good authority that pride comes before the fall.

Sure, that would require an awful lot of luck, but if nothing else, don’t shelve your expectations just yet. Thanks to a savvy, old coach and a cool-headed front office, contention might be just around the corner, along with the rise of a not-wholly unrecognizable new Big Three. The pieces are there. And if there’s anybody I trust to make the pieces come together, it’s Gregg Popovich. He’s done it before, and with three players who could prove so similar to the most decorated Big Three in league history, he can do it again.