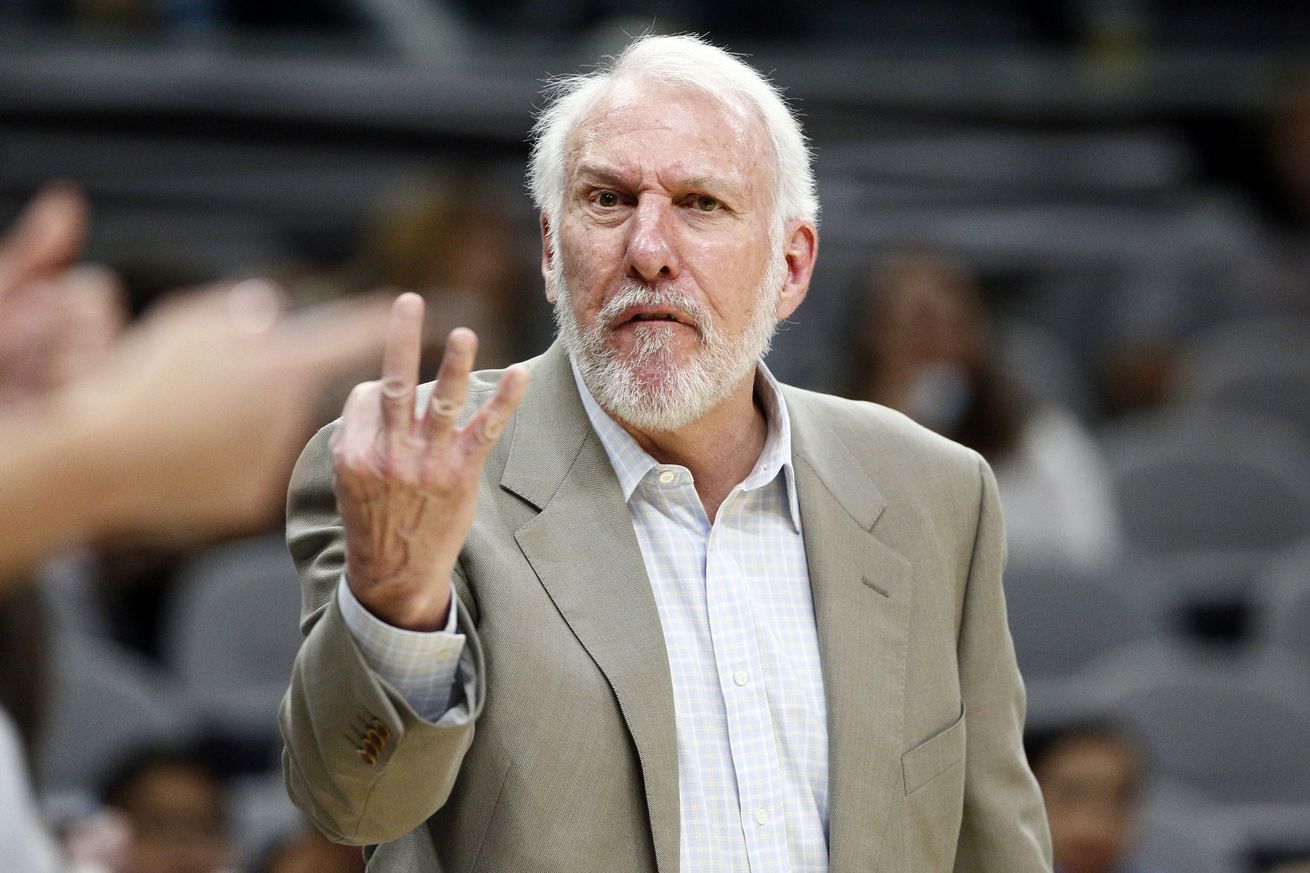 San Antonio started strong on Tuesday night, building a double-digit lead which only wilted late after Pop emptied his bench.

“Are you coaching tonight?” a reporter asked Gregg Popovich before Tuesday night’s tip against the Magic. The question was fitting given that Pop had watched the last two games from the stands, allowing his assistants to assume greater roles in the huddle. “Nobody else wanted to do it,” he replied.

The truth is, of course, Pop never stops coaching — even when he’s nowhere to be seen. While the “Spurs system” may be the closest a sports team can approximate machine learning, with its pieces gradually trending towards a “beautiful” absolute, this is a new group that will still benefit from his stone-faced oversight.

He was back on the sidelines versus Orlando, calling the shots in the penultimate game of the preseason. And although the Spurs ultimately lost, 103-98, there was no shortage of positive takeaways.

LaMarcus Aldridge (16 points) continued his strong play, dividing his time between the post and three-point line, where he went 1-of-3. He now has eight attempts through four games, after averaging less than one attempt per game last year. Later, the power forward confirmed the increased focus on extending his range this season.

“That’s what the offense is gonna give us, trying to keep the door open and space us out more. I’m definitely gonna take the three more this year.”

“He’s playing real loose, especially on offense,” Pop said of LMA. “He looks comfortable; he’s getting the ball in good positions. He’s done a fine job and been a real stalwart on the offensive end of the court. And just like last year he’s working hard defensively.”

Dejounte Murray started once again at point, making the case for why he should keep the job through the start of the regular season. He scored the first basket of the night, a confident floater in the lane, but was also able to get all the way to the rim with ease. The skills Murray can be seen working on before games — among them, coming around screens and attacking decisively — are coming around nicely. The second-year guard had 15 points and five assists, while also putting his length to use by grabbing six rebounds and picking up three (!) blocks.

Patty Mills had an efficient night, scoring 13 points in just 18 minutes and missing just one shot. Rudy Gay didn’t get the start but had his strongest game yet as a Spur, putting up a tidy 13, 7 and 4. Gay did a bit of everything, hitting a three, getting to the line, and creating off the dribble.

A familiar face was back in the building, as Jonathon Simmons, now bedecked in blue and white, helped defeat his old squad. Juice had 20 points and 10 assists, showcasing his usual brand of acrobatic plays and a knack for the kind of secondary playmaking his new team will need.

Simmons left San Antonio this summer after signing a three-year $20 million deal with Orlando. He said he was happy to be reunited with his teammates, and met with Pop beforehand, but also dismissed the notion that the matchup had any greater meaning for him. Per one reporter, Simmons said he’d learned from his former coach not to bring emotion to games.

“He actually said I taught him something?” Pop joked. “That’s amazing. I didn’t know if anything stuck or not.”

Yet Pop made sure to recognize the significant growth he’d seen in Simmons’ game during his time in San Antonio, attributing it to what he has “between the ears”. Many players, he pointed out, have possessed similar tools but been unable to put it together — but not Simmons:

‘He’s got a big heart and he’s come a long way, as you know, from his D-League tryouts,” he said. “It’s a whole new world for him… He’s obviously a talented player, and I told him ‘it’s all between the ears, how you handle things. The talent is there, and he did a great job for us last year, he came a long way or us. Hopefully that’ll continue in Orlando.”

That’s the case with many of the players the Spurs produce: they already possess the necessary hardware and software; the system, simply finds a way to get more out of them. We witnessed that with Simmons, and we could already be seeing that with some of the 2017-18 squad.

Clutch-time reps for the Magic starters

If you want a reason for why this game flipped from the 85-77 lead the Spurs had going into the fourth quarter, just look at who was on the floor. With Pop pulling his rotation players in the fourth, Magic coach Frank Vogel used the moment as a chance to develop his young core. His starters stayed on the floor and were able to gut out the win.

Another great showing from JoLau

I don’t know if that’s the best option for a nickname, but we are going to need a shortform for Joffrey Lauvergne soon. He’s playing too well to not be mentioned regularly, as he impacts nearly every possession with his high activity and even higher IQ, and J-O-F-F-R-E-Y L-A-U-V-E-R-G-N-E is a lot to type.

Anyway, he had another five assists on Tuesday night, rewarding cutters with pin-point passes for easy finishes. He should become a fan favorite in no time.

Pop on Brandon Paul and how he compares to Jonathon Simmons:

“Brandon’s a defender. He’s more of a Bruce Bowen type, trying to figure out what to do offensively, improve his game, make it more complete. Jon has some offensive skills that you can’t teach, along with his explosiveness — it makes him a really quality player. He also plays defense. He’s become a well-rounded player.”

Pop with some closing insight

In a slight digression at the end of his pregame availability, Pop referenced a TED Talk he’d recently watched about society reaching new heights of “tech upgrades” but having a need for a greater “human upgrade” — qualities such as concern, empathy and love.

“How do you even have time for stuff like that during the preseason?” somebody asked afterwards.

He responded, “I didn’t coach the last two games.”