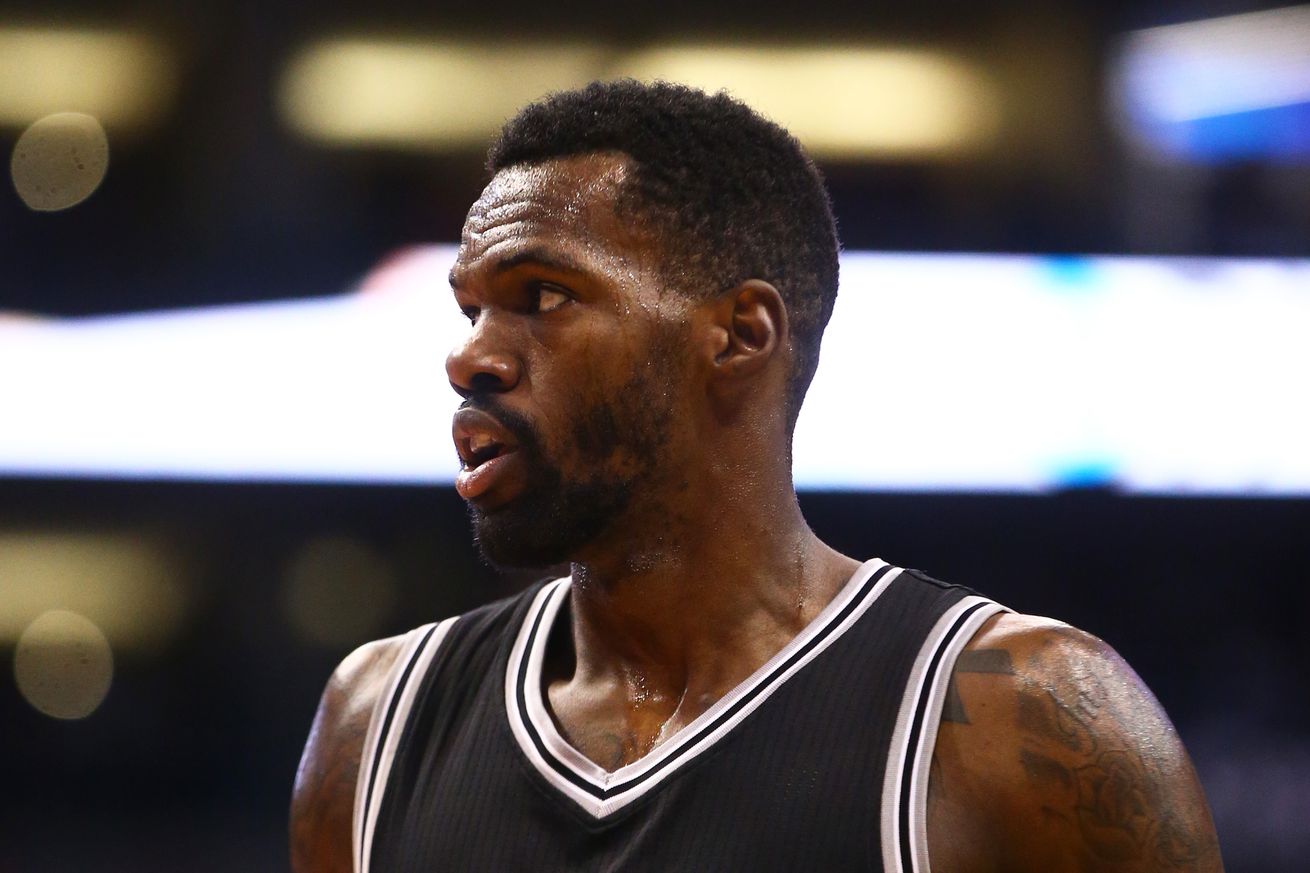 If the Spurs’ new starting center decides to opt out of his second year, the front office will have some tough decisions to make in the offseason.

The Spurs really found a gem in Dewayne Dedmon. The four-year center is in the middle of a breakout year. The numbers — five points and six rebounds a game — are not all that impressive, but his defense and finishing ability are elite.

Most centers of Dedmon’s caliber get eight-figure deals, yet San Antonio managed to sign him for peanuts: $6 million over two years. The downside to getting that cheap production this year is that he has the ability to opt out in the offseason.

Unless something unforeseen happens, he will. And he will get a serious raise. So the question is, can the Spurs keep Dedmon long-term after this season? It’s complicated and it would involve sacrifices, but it’s not hopeless.

Let’s go through all the pertinent information.

The Spurs don’t have Bird rights to Dedmon

That means the Spurs can only offer a small raise — 120 percent of his current salary — if they are over the cap. That won’t be enough to retain him. They can also offer him the mid-level exception, worth $8.4 million, which might be enough, considering traditional centers are not in high demand.

If Dedmon wants more than that, however, the Spurs could only retain him by carving out enough cap space to make a bigger offer. That would be complicated, because…

Gasol seems comfortable in San Antonio. He said not long ago that he expects to opt in on the second year of his contract, worth $16 million. It seems like a sensible decision, since he might not get that much elsewhere. Unless not starting becomes an issue, Pau will be with the Spurs next season, in all likelihood.

With Gasol on the books, the Spurs will have around $90 million in committed salary, assuming David Lee opts out of his minimum contract (very likely) and Bryn Forbes is waived. The cap is expected to be set at $102 million, which would give the Spurs $12 million to spend. Alas, that number is severely reduced once cap holds are accounted for.

Jonathon Simmons‘ cap hold — a $1.6 million placeholder that goes on the books until he’s either re-signed, renounced or signs elsewhere — is not big enough to seriously affect the Spurs’ plans. Mills’ cap hold, on the other hand, is worth around $7 million.

If that cap hold is on the books along with Simmons’, the Spurs would only have around $3.5 million in cap space. If we add the exceptions at their disposal, which count against the cap unless renounced, they will be over the cap.

It’s unlikely the Spurs can keep both Mills and Dedmon

Mills should get an eight-figure deal easily in free agency. The Spurs could offer him more than anybody else, but to do so they have to keep his cap hold. That would make it impossible for them to make Dedmon a competitive offer, unless he’s happy with mid-level exception money.

Without Mills’ and Simmons’ cap holds, however, the Spurs could carve out close to $12 million. That’s less than Ian Mahinmi and Bismack Biyombo — players similar to Dedmon — got last offseason, but should be enough in next year’s market, which will feature plenty of centers.

If it isn’t, the Spurs would be better served trying to find another diamond in the rough rather than overpaying for a good but limited player. After all, those contracts signed last season are not looking great right now.

We are months away from free agency, so a lot can change

July is five months away. That’s a lot of time for surprises. Maybe Gasol decides to opt out. Maybe the front office is ready to part ways with Mills, hoping Dejounte Murray is their point guard of the future. Or maybe Mills wants to leave to start somewhere else. That would make the decision-making process easier.

There are also a lot of drastic moves that the franchise could be angling for that we have no way of factoring in right now. Point is, things could change.

For now, though, the best we can do is enjoy Dedmon’s play. If he continues to perform at this level and helps the Spurs go on a deep postseason run, expect the front office to do all it can to keep him.