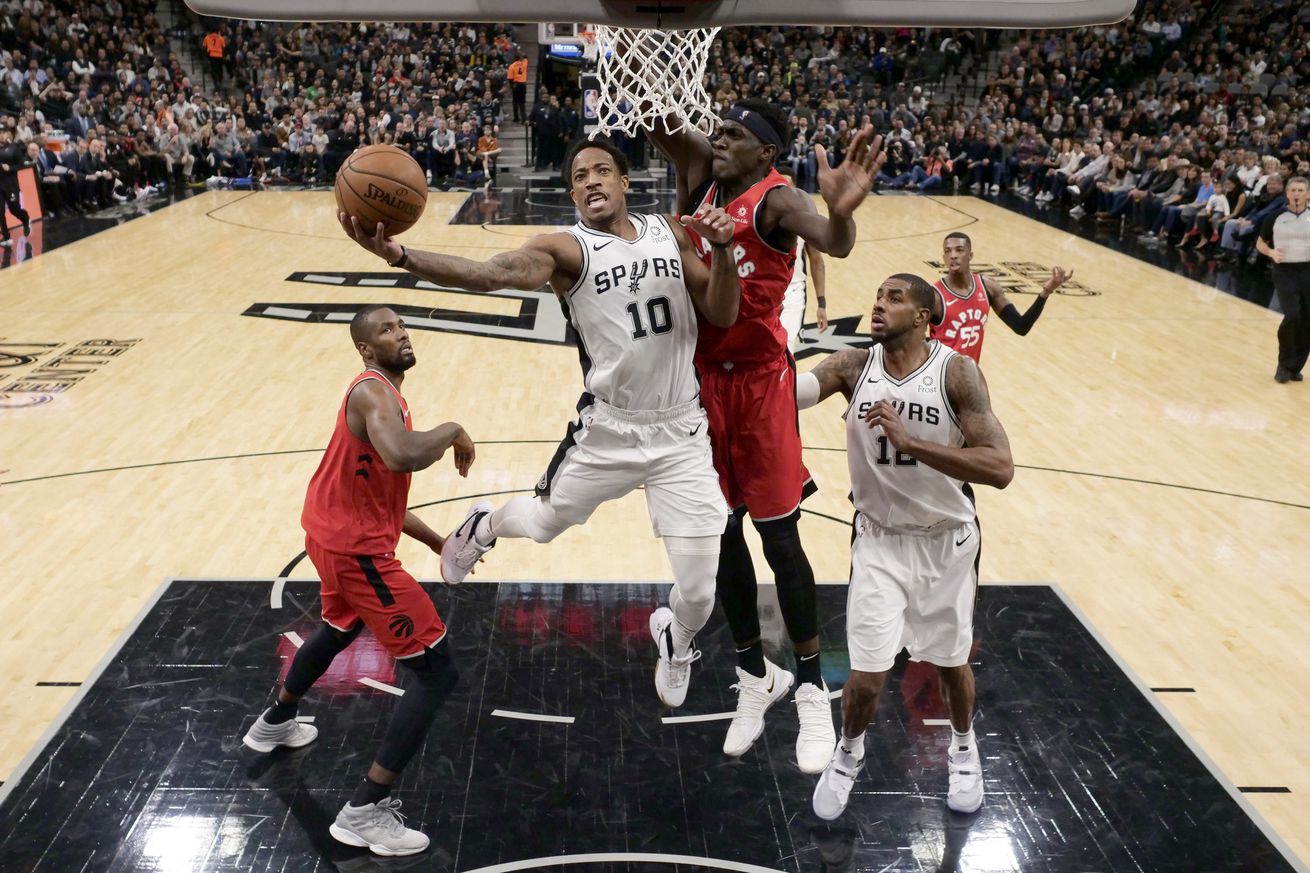 A closer look at how San Antonio dominated Toronto.

The Spurs sprinted out of the gate to a 19 point lead in less than 9 minutes against the Raptors on Thursday night. With 10 points scored on fast breaks contributing to 20 points in the paint in just the 1st quarter, the Spurs’ advantage was largely predicated on their ability to stop penetration on one end and create it on the other.

The last possession of that run on both sides of the floor is a great example.

Kawhi Leonard brings the ball down the right side of the floor and Derrick White picks him up just outside the three point line. Leonard waives Norman Powell out of the strong side corner for a pick and roll with Serge Ibaka, a play the Spurs run a lot, too. As Ibaka moves into position for the screen, LaMarcus Aldridge calls out the coverage and Derrick shifts up on to the high side of the pick, forcing Leonard to the sideline.

The Spurs are little disorganized on the weak side at this point, but all eyes are clearly focused on Leonard.

Davis Bertans calls out the Raptors’ off ball movement and the Spurs don’t switch it, likely because of who it involves. DeMar is trailing Powell through the paint and for a brief moment he’s the low man on the weak side, meaning he’s got the responsibility to help if Leonard can get by LaMarcus. Davis kindly points that out, but as Powell moves up to a higher position, DeMar follows him, putting Davis in the helper position.

By this point, Derrick and LaMarcus have forced Leonard to reset higher on the floor, still looking for an avenue of attack. The extra space helps, and after Derrick goes under a screen towards the sideline, Ibaka pivots into a rescreen giving Leonard a path to the middle of the floor. The amount of attention this draws from the Spurs’ defense is remarkable.

LaMarcus slides over to stay between Leonard and the rim, Derrick recovers to him, and Patty helps down to the center of the court. All the attention forces Leonard to kick the ball to Delon Wright on the left wing. This looks like a good shot, but Patty was helping that far off for a reason. Wright is now shooting 8.7% from three with a defender within 6 feet this year. For his career, he’s shooting 23.3% in that situation, so even though he’s hitting nearly 36% of his catch and shoot 3s this season, helping off him and closing out is the exact right decision in this case.

Wright bricks the shot, Derrick tips the rebound to DeMar, and the Spurs offense is on the clock again.

The Raptors only have two players going for the rebound, Leonard and Ibaka, and the rest are getting back on defense. As DeMar turns to head up court, he’s essentially right next to Leonard, and the other 4 Raptors have a sizeable head start. That doesn’t stop DeMar from pressing the advantage, though.

As DeMar accelerates towards the rim, he has the attention of all five defenders, four of whom are within an arm’s reach of him at some point. Only Pascal Siakam actually gets in his way, though, which is a problem because Davis has gotten behind the Raptors’ defense and spaced out to the left corner. That leaves DeMar an easy play once he uses his exceptional handle to make it past Wright’s swipe. The only downside to this whole sequence is that Davis’ toe is on the line.

That shot gave the Spurs 6 points in transition in just 9 minutes, with most of the rest of their buckets resulting from penetration as well. Both DeMar and Derrick were able to get into the paint with ease, which led to the two scoring or assisting on 26 of the team’s first 30 points. Check out all their drives in the first quarter here, and the team’s continued dominance in transition here.

The Spurs inside-out attack was incredibly effective in this game. After taking the lead for good on a Bryn Forbes three less than a minute into the game, the Spurs outscored the Raptors 27-9 over the next 8 minutes without making a single shot from outside the arc. All that penetration collapsed the Raptors defense, which led to the Spurs shooting 12-23 from three over the other 3 quarters.

While it’s clear the Raptors missed Kyle Lowry and Jonas Valanciunas, the Spurs were so locked in it may not have mattered. The team has hit a gear their opponents have been unable to match in almost every game over the last month, making it harder and harder to believe this is just a hot streak. This just might be who they are.