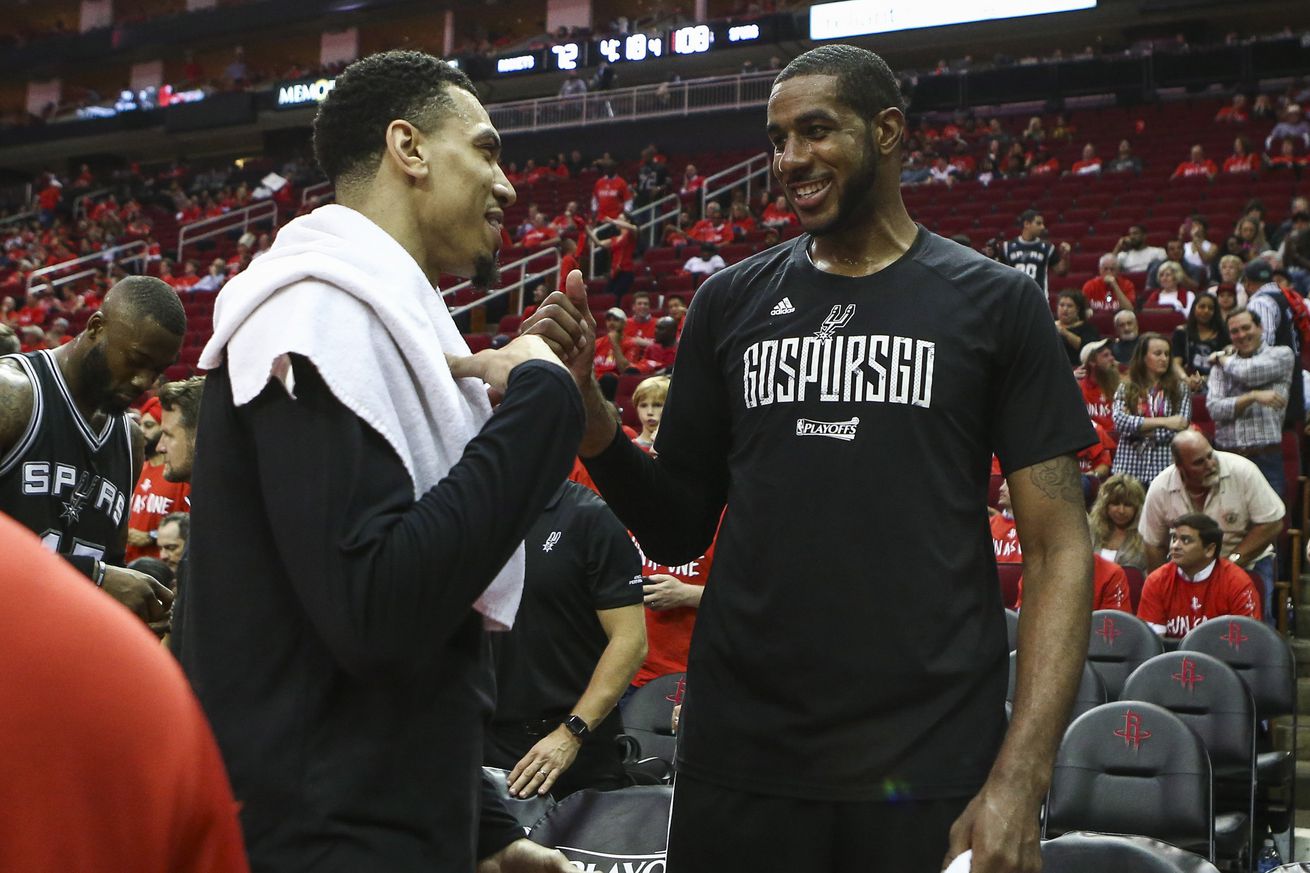 The Spurs reportedly kicked the tires on a few players’ value, but no blockbuster trade was made.

Well, I hope we all learned a lesson. Despite whispers that the Spurs were shopping Danny Green, that LaMarcus Aldridge was unhappy in San Antonio, and that they were looking to trade into the top five of the draft, PATFO stood pat last night, selected at 29 and 59 and went home.

It was a letdown for any fan who’d spent the hours leading up to it firing up the Trade Machine or scrutinizing Aldridge’s Twitter account (did you know he follows Melissa Joan Hart, btw?), if not a sobering reminder of who the Spurs are as an organization: they’ll complete their due diligence, but won’t act upon impulse or rumors of player discontent. Here’s what Spurs GM R.C. Buford had to say when asked about moving Aldridge on draft night:

“We are happy with the group we have. If we can make it better, we will do it.”

Of course, Buford’s response does nothing to dispel the notion that they were looking to move their starting power forward on Thursday, and it certainly seems to imply a move could still be in the cards. Now that the 2017 picks have become actual players with strengths and weaknesses, the trade market takes on a different light. With free agency just around the corner as well, things should get more interesting as the Spurs look to (possibly, maybe) make bigger changes to the roster.

Here are some other takeaways from draft night:

The Spurs bet on experience over upside

An NBA record 14 one-and-done players were selected in the first round of the draft, and that’s not counting 18-year-old French point guard Frank Ntilikina and 19-year-old Terrance Ferguson who played in Australia last year. More than ever, teams saw talent and value in the younger crop of players, betting on upside over accomplishments and experience — 10th overall pick Zach Collins was a backup at Gonzaga and 20th overall pick Harry Giles played 11.5 minutes and averaged less than four points per game.

The Spurs, ever the type to zig when everyone else zags, selected the oldest guy taken in the first round, a former Division II player who put up a tidy 18-4-4 and terrific percentages in his first and last season at Colorado. White’s journey as a player and versatile skillset (check out this great Jonathan Tjarks deep dive on him) suggest he’s a perfect fit in San Antonio, and he could prove to be a steal in a year where other teams may have swung too hard for home runs.

Also, if you haven’t seen it yet, here’s a video of White getting emotional when he received of a call from Gregg Popovich welcoming him to the team.

Derrick White, @Dwhite921, got emotional when he got a call from Gregg Popovich. Tears started flowing. pic.twitter.com/qqQ44CjjGb

Does Derrick White’s selection mean anything for the Spurs in free agency?

You can get a better breakdown of him here, but White appears to be something of a tweener in San Antonio, with the size and skills to play either guard position early in his career. With Patty Mills an UFA, Jonathon Simmons a RFA, and Danny Green reportedly on the block, it’s at least worth pondering what White’s selection means.

I mostly agree with PtR’s resident cold-bucket-of-water Jesus Gomez, who expects White to see plenty of time in Austin next year, but one would also expect the 22-year-old rookie to be ready to contribute earlier than most. His game isn’t entirely different from Bucks rookie Malcolm Brogdon, another well-rounded guard who was drafted late and is now among the finalists for 2017 Rookie of the Year.

If the Spurs see a future where White assumes at least partial ball-handling duties, that would seem to impact Mills’ future more than anyone’s, given the team will need to decide whether or not to extend a multi-year (and likely expensive) offer to the Aussie.

It’s hard to expect much from anyone this late in the draft, but at the very least, San Antonio spent their 59th pick on a player with an NBA body. Blossomgame has good strength, length and ups for a wing in the association, but he’s also 23 and saw his three-point percentage drop significantly from his junior to his senior year. If he (along with shooting wizard Chip Engelland) can find consistency there, Blossomgame could end up being a steal.

Here’s a highlight reel for you to get better acquainted with the guy.