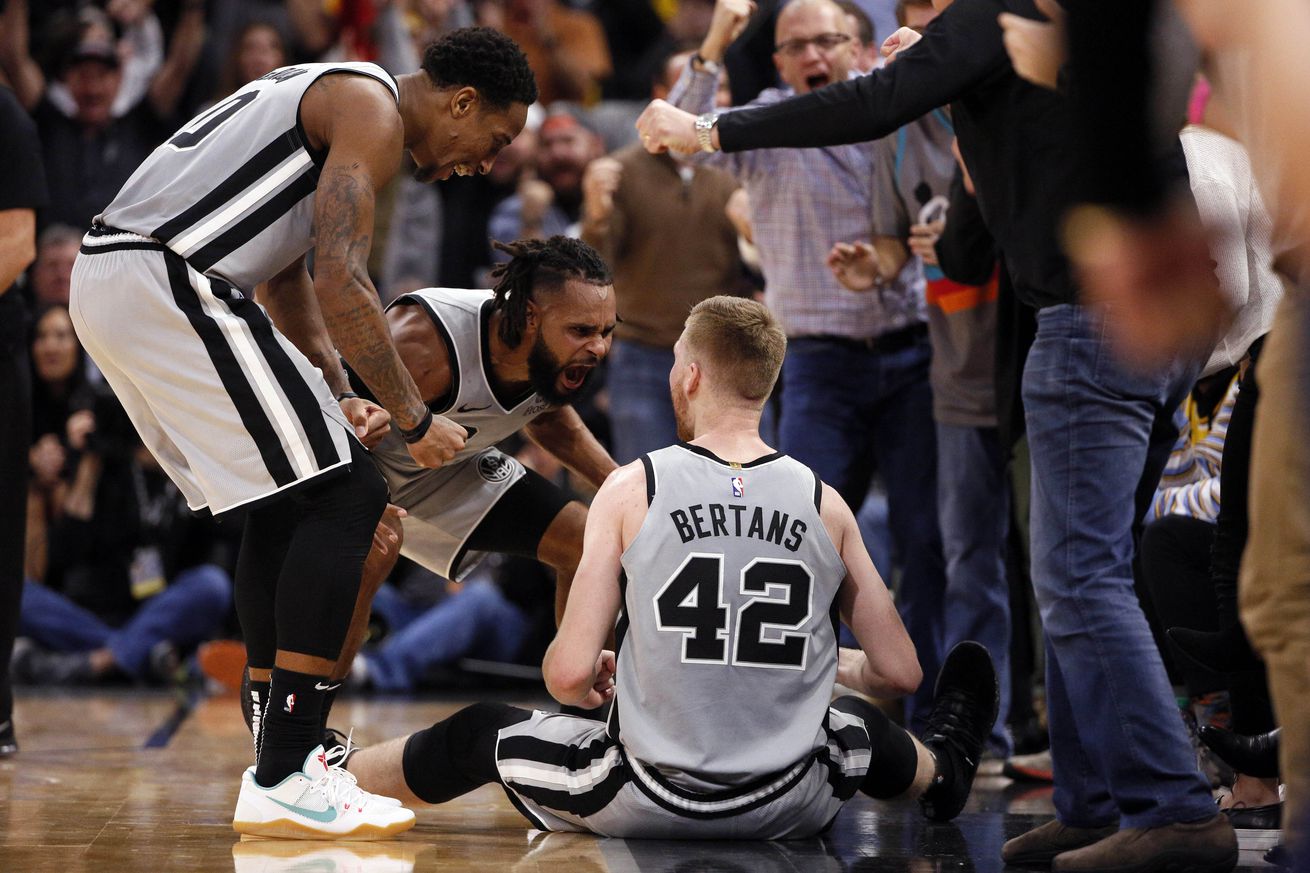 After tinkering with the rotations for the first 25 games of the season, Gregg Popovich has found some combinations that work.

One of the biggest issues the Spurs faced earlier in the season was the high turnover of personnel over the summer, which resulted in a lack of familiarity. A franchise which always puts a premium in preserving continuity found itself trying to establish a new identity on the fly.

At the individual level, the effects were noticeable to the naked eye. The players simply didn’t know each other’s tendencies, which was especially harmful on defense. At the team level, the problem manifested itself in the flawed and underperforming groupings Gregg Popovich was putting together. He just didn’t know what worked.

After some experimentation, it seems like Pop is finally finding the right combinations. Both in the starting lineup and off the bench, there are some units that had struggled in the past but have worked recently and could become mainstays going forward.

The starting lineup was a huge issue early on. Derrick White was slated to start at point guard but got hurt and was replaced by Bryn Forbes, who proved to be a good complement to DeMar DeRozan in the backcourt. Jakob Poeltl was the nominal starter, but he barely played, as his presence forced Aldridge into the perimeter on defense at a time in which he was more comfortable inside. Then Dante Cunningham got the second big man slot. At first Cunningham’s solid one-on-one defense and energy gave the team a boost, but his limitations on offense were too big to hide. He wasn’t a long term option.

The Spurs tried other permutations, but finally appear to have settled on a new starting unit that has done well recently. Derrick White and Bryn Forbes man the two guard spots while DeMar DeRozan and Rudy Gay both fill the forward slots, with Aldridge remaining at center. At first the lineup struggled to click on offense, as Derrick White’s value on that end was on the ball, the same as DeRozan’s. The defense, meanwhile, didn’t see a big improvement despite the addition of White theoretically adding more versatility to the unit. After those initial struggles, however, it seems this unit is finally finding its footing.

In the past eight games, that lineup has outscored opponents by over six points and has excelled on offense despite playing at a glacial pace. The focus of this unit on the offensive end is clearly LaMarcus Aldridge, who takes by far the most shots out of everyone in the over 12 minutes a game that lineups has spend together recently. White, meanwhile, essentially takes on the Cunningham role as a low usage defender, only with perimeter skills. As long as Aldridge is sharp and Bryn Forbes and Rudy Gay make their outside shots. however, White poor individual numbers don’t matter. That five-man combination allows Pop to run the offense through Aldridge while having ball handlers on all other positions.

While Aldridge needs the team to work to get him shots, DeRozan can get the ball and call his number as much as he wants. That’s typically a good thing, since he’s obviously an incredibly talented scorer, but sometimes it results in him inadvertently freezing out his teammates and taking too big of an offensive load. He needs units in which he can pull the offense to himself, but ideally he also needs to spend some time in lineups in which everyone is a scoring threat when the ball moves and in which there are some shotmakers to take pressure away from him on most possessions. The bench mob of Patty Mills, Marco Belinelli, Davis Bertans and Jakob Poeltl offers him that.

The unit has an explosive offense over the past eight games even though DeRozan has shot just 38 percent while surrounded with those four other guys. The outrageous three-point shooting from Bertans and Belinelli, combined with Poeltl’s finishing ability inside and Mills’ steady hand has allowed that unit to score at a really high clip while rarely turning the ball over. DeRozan takes the most shots out of the bunch, but the rest all take roughly the same amount, which makes the lineup not as dependent on just one player. DeMar gets to mostly drive on a well-spaced floor when there are no better options. Despite not hitting a lot of shots, he gets to the line enough to bail out some possessions.

Defensively no lineup that features the undersized backcourt of Mills and Belinelli along with DeRozan at small forward will ever be great. But that unit does have a nice defensive frontcourt in Bertans and Poeltl and everyone has been trying their best lately. They rebound well as a group, don’t cough the ball up too often and barely ever foul, which prevents opponents from getting easy points. This is clearly an offensively-oriented unit, like most on these Spurs, but it does enough little things well on defense to not get outgunned. It also features enough firepower that when it goes off, it can break a game open.

The Spurs are slowly starting to find their core lineups, those that are heavily used and a fixture no matter the matchup. Surprisingly, some of them didn’t work all that well earlier in the year, which suggests individual improvement along with new game plans have made some units that seemed unusable viable again.

The lesson from those first 20+ games is that Spurs should continue to experiment in hopes of finding even better lineups to use. Yet it’s reassuring to see some five-man combinations that can be relied on after so much confusion early on.

As we approach the halfway mark of the season, the real playoff teams will work to make a push up the standings and the pretenders will start falling by the wayside. It took a while but it seems that the Spurs rotation is starting to come together at the right time.