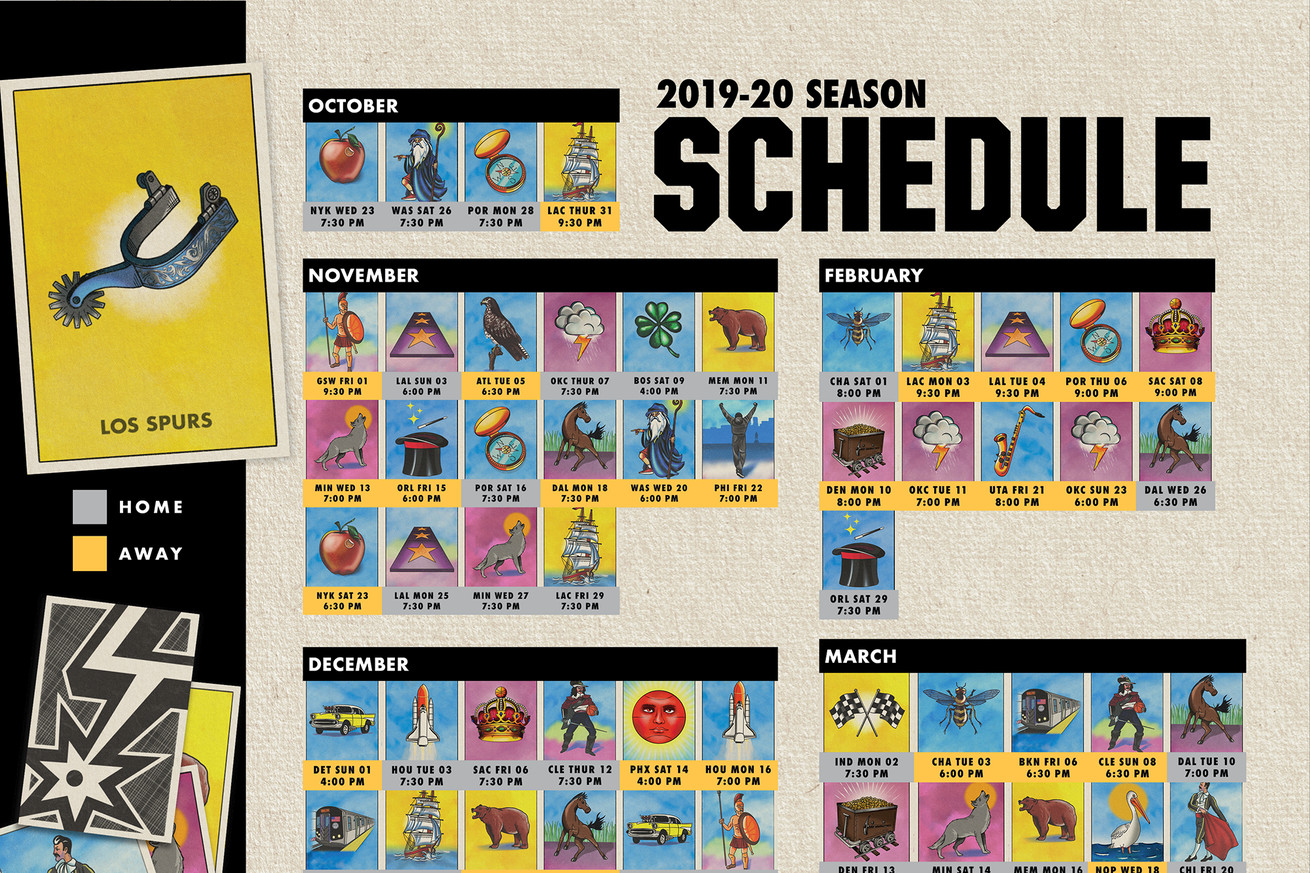 A quick look at difficulty, obstacles, homecomings, and games to get hyped for.

The NBA released this year’s schedules on the NBATV “Schedule Release Show”, hosted by Jared Greenberg. Naturally, the Spurs were hardly mentioned throughout the show, but what matters is we now have a schedule to add to our calendars (with games to circle and to plan for — I’m saving my pennies for a few of these games). As Marilyn Dubinski mentioned in her earlier post, we have a countdown: 72 days and counting.

Schedule: By the Numbers

This November looks to be a tough month for the Spurs, similar to last year’s November schedule. The Silver and Black play 8 home and 8 away games, but it’s really two 3-game home stands separated by a 4-game road trip. They start the month at Golden State and end it facing the Clippers at home. The road trip doesn’t look too difficult, but the team will be playing some tough home games versus the Lakers, Celtics, Grizzlies, Timberwolves and the aforementioned Clippers.

Til the Very End

The end of season doesn’t look as easy as it has in previous seasons. The Spurs end the season with two back-to-backs separated by one game (mentioned previously as the only FIGASENI). This year, unlike previous years, we actually end the season at home, playing the Pelicans. Hopefully the team’s playoff seeding will be solid and positioning won’t be at stake.

The opening game of the series takes on some drama due to the Marcus Morris snub and the Knicks’ grumblings of impropriety regarding the Spurs and Kristaps Porzingis.

The return of Davis Bertans takes place early in the season, ironically immediately after Spurs fans will welcome the player who ultimately caused them to trade Bertans before backing out. Fans certainly still like the Latvian Laser, so he will probably get a warm reception.

The first time the Spurs will face the Nephew’s new team. Paul George should still be recovering from shoulder surgery, so the Silver and Black will have an opportunity to put all their focus and energy on #2.

The first time LeBron James and Anthony Davis will come to San Antonio together should be interesting. Will they have had time to mesh? Will the role players know their parts yet? Will a certain former Spur, Danny Green, still get a warm welcome while wearing the dreaded purple and gold?

While Spurs fans may not be thrilled to see Kawhi Leonard with another West team, there has been a sense of vindication that he ultimately jumped ship (again) and went to his hometown, even after winning a championship with Toronto. Will he be met with the same animus as last year, or will Spurs fans have cooled off?

James Harden and Russell Westbrook, back together again, only this time in Rockets’ uniforms. This Tuesday night game looks interesting because it will be fascinating to see if these two mega-ball handlers can still get along since both won MVPs apart from each other.

Well, not really at Phoenix. This game will be played in Mexico City. Let’s hope it goes without a hitch (I distinctly remember years with problems in Mexico City, smoke being the most memorable).

The Spurs meet the Warriors in California earlier in the season, but this game will be the first in San Antonio, and the teams should be in better form, so we should get to see a more realistic match-up (although some pundits are arguing that the Warriors are not favored to win it all or even get to the conference finals this year). More than likely, Klay Thompson won’t be back, but everyone else on both teams should be gelling.

The last game of the season will be at home. In previous years, the Pelicans have served as playoff seeding spoilers. (The nightmares of 2015 still persist.) Hopefully this year, the Spurs can cruise into this last game with solid playoff positioning and ready to rest some starters heading into the playoffs.

What games do you have circled? Let us know in the comments.