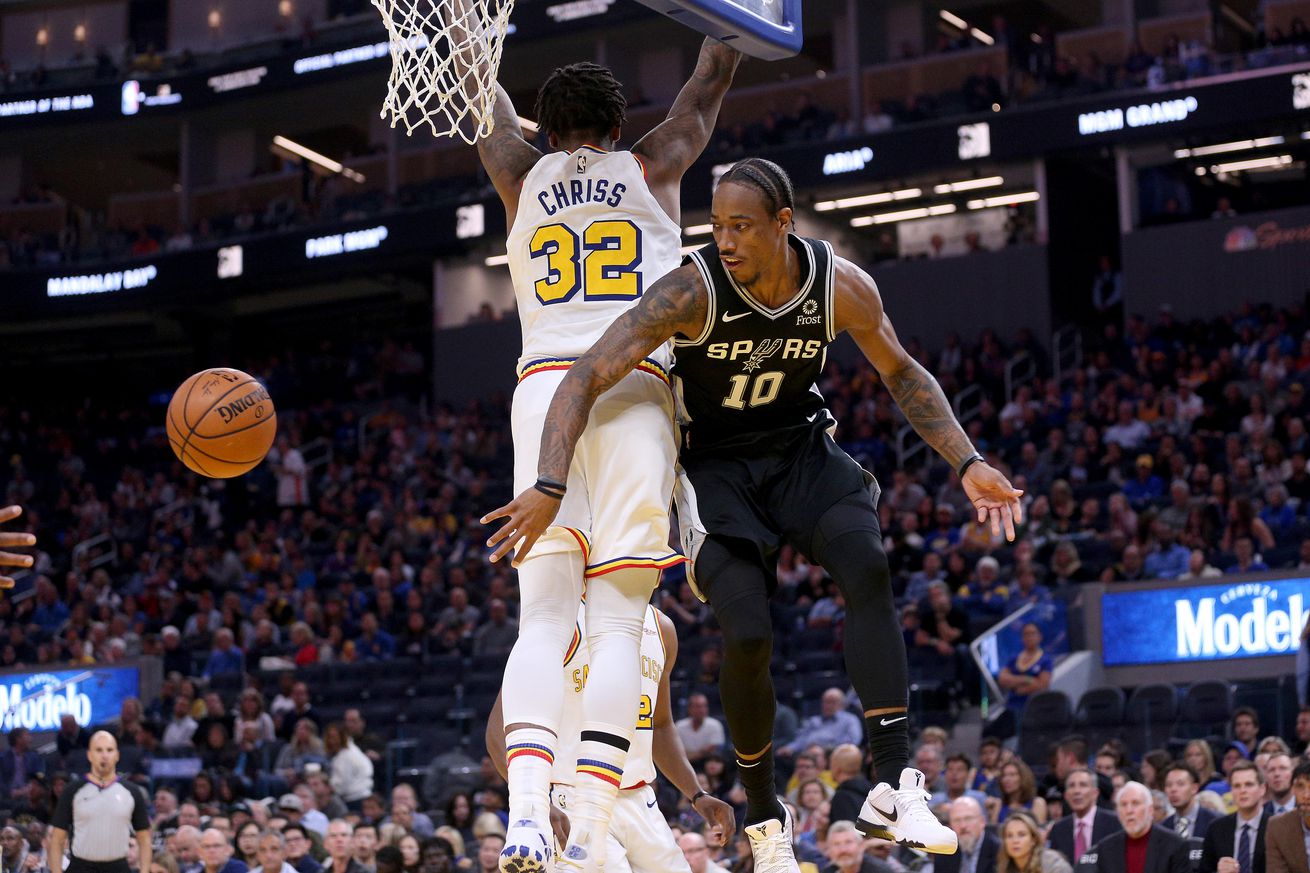 The Spurs offense had a field day against the injury depleted Warriors in their 127-110 victory in San Francisco on Friday night. With six players reaching double figures (including Patty Mills who dropped 31 for just the 3rd 30-point game of his career) the good guys put up their best offensive game of the season.

Much of that had to do with the still-reeling Warriors, who’ve been forced to assemble a rotation on the fly out of the parts and pieces that typically constitute an end-of-the-bench mob. Some of it was due to Mills’ incandescent shot, as FIBA Patty made almost as many shots (10 to 11) and scored almost as many points (31 to 32) as NBA Patty had in the previous four games combined. But some of it, especially the team’s 3rd quarter dominance, was made possible by DeMar DeRozan sliding back into his starring role from last season as the team’s primary initiator and facilitator.

Through the first four games, DeMar seemed to struggle to create for others as teams generally resisted the urge to help on his probing forays into the defense. Over those four contests, DeMar used an average of 10 shooting possessions while registering 2.25 assists and 4.25 turnovers per game. But those numbers don’t present the whole picture.

DeMar produced 26 potential assists in those games (passes which result in a shot within 1 dribble), but the Spurs knocked down only 9 of the ensuing shots. Whether because of the quality of the shot created or just plain bad luck, DeMar’s assist numbers have been way down this season — that is, they were until Friday night.

Against the Warriors, DeMar tallied up 11 assists (on 21 potential assists), 6 of which came in that gorgeous 40-point 3rd quarter. LaMarcus Aldridge was the primary beneficiary, as 4 of his 5 made field goals in that frame, all 2-pointers, came off a setups from DeMar. The first two, on back to back possessions early in the 3rd, were quintessential pick and pop looks.

There’s nothing flashy here, but when LaMarcus is hitting these shots it opens up better opportunities for DeMar to get deep into the defense. LaMarcus took advantage of DeMar drawing help on the next play, with some nice off ball movement to find an open spot down low.

DeMar’s fourth assist to LaMarcus in the quarter came on a similar situation, though it developed much more quickly.

DeMar attacks early on the left side out of a Pistol action and when help comes, he wraps a nice drop off around the defender’s back to give LaMarcus an easy dunk.

DeMar’s other 2 assists in the quarter were for open three pointers, one each for Patty and Bryn Forbes. That was a bit of a trend on the night. All of DeMar’s assists that didn’t go to the big Texan came on shots from behind the arc.

It’s not surprising that the team’s offense had a good night against these Warriors. Golden State has the worst defense in the league so far and, as the injuries continue to pile up, don’t have much hope of significant improvement on the near horizon.

It probably had more to do with the defense, but there is a small reason for concern in that DeMar’s break out playmaking night came with Dejounte Murray resting on the SEGABABA. The extra spacing afforded by having a little more shooting on the floor may well have contributed to DeMar’s strong performance. Of course, it’s also just one game against a weakened opponent, and on the whole, the offense has been just fine, so there’s no need to ring any alarm bells just yet.

The defense, on the other hand… well, just watch these two plays.

That’s two very obvious cases of not respecting your opponent. It’s fair to expect that did not go over well with Pop, who will see that it doesn’t carry over into more competitive contests.