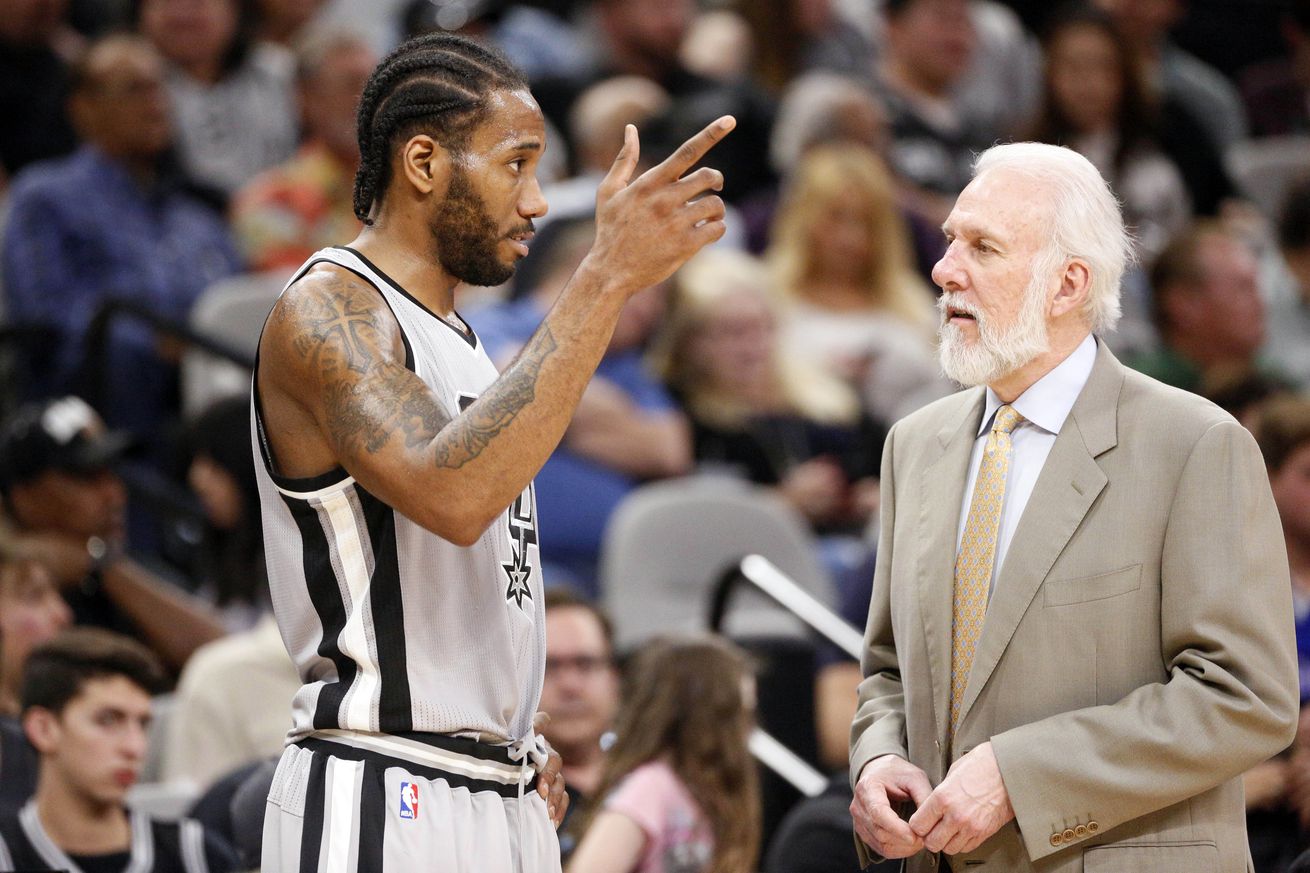 Tuesday evening’s reports of a meeting between Pop and Kawhi set the stage for a potential quick move.

The 2018 NBA draft is just hours away, and there have been new developments in the Kawhi Leonard saga. The much anticipated meeting between coach and player finally happened in San Diego on Tuesday. Gregg Popovich talked to Kawhi, according to multiple reports.

While accounts differ on how well the meeting went, I t’s a good thing the Spurs met with Leonard before the draft. There’s no obligation to make a deal right away, but if a breakup is inevitable, there are the reasons it would be better to get it done before Thursday.

After the draft, picks turn into players

One of the possible returns on a Leonard trade could be a high draft pick. There have been reports that the Kings would be willing to surrender the second pick in order to get Kawhi. It’s highly unlikely they pull the trigger, since Kawhi reportedly won’t commit to re-signing with anyone but the Lakers, but it’s still a possibility. If it were to happen, the Spurs would have their pick between Luka Doncic, Jaren Jackson Jr., Mohammed Bamba or Marvin Bagley, among others, assuming DeAndre Ayton goes first. That’s an interesting crop of elite young talent. If the Spurs get that pick, they can choose a centerpiece to kickstart their rebuilding effort.

But if the Kings keep the pick, the Spurs could realistically lose a trading partner. A big part of the value of a high pick is the possibilities it presents. Once it’s used, however, it becomes a player. Maybe even one that the Spurs don’t hold in particularly high regard. There have been reports linking Michael Porter Jr. to Sacramento, for example. So if we assume the two teams don’t complete a trade before the draft and Porter is the Kings’ pick. It’s possible R.C. Buford likes him as much as Vlade Divac does. If he doesn’t, then that’s one fewer team to negotiate with, since Sacramento doesn’t really have much else to tempt the Spurs.

The same applies to any offer centered around picks, like a potential package from the Clippers involving the 12th and 13 picks, or one from the Sixers structured around the 10th pick. If those teams don’t select players the Spurs like, that’s one fewer trading partner San Antonio could approach.

After the draft, the rebuilding timeline gets longer

Let’s assume the Spurs agree to trade Leonard for an extra draft selection or two outside of the top of the lottery and decide to rebuild. Armed with those acquired assets, they could attempt to put together a package and move up. Alternatively, if they are not enamored with the first round talent, they could try to flip the pick they received for an unprotected future first rounder and use their own to take a risk at a lower salary. They could even use one to move down while getting an extra selection by, targeting the Sixers’ 38th and 39th selections or the Suns’s 30th and 34th. Having two draft picks would give the team a lot of options this season to accelerate their rebuilding process. And those scenarios only address the possibility of adding talent through the draft.

If the Spurs want to shed contracts, an extra pick could come in handy. Let’s say Kawhi goes to the Clippers for the 12th and 13th picks and filler. The Spurs could attach one of those to Pau Gasol’s contract and send him to the Hawks, who are reportedly interested in getting another lottery pick. San Antonio could use the other — or their own — to move Patty Mills. Even without moving Aldridge they could create some cap room in an off-season that few teams have it. It’s hard to imagine elite free agents signing with the Spurs in this reality, but they could try to steal some restricted free agents, which are almost all young. Clearing out the roster would also ensure they’d bottom out in 2019, giving them a higher pick.

If the plan is to trade Kawhi and rebuild, it would be easier to execute if the move happens before Thursday. The Spurs could get a head start on acquiring young talent via the draft or use extra selections to shed long term contracts. To implement either idea, draft picks are key.

If the Spurs let the draft go by, they better be ready to wait as long as necessary

As mentioned, the draft is not a deadline to make a deal. The Spurs can offer Leonard a supermax up to the start of the season. If Kawhi’s current position wavers and talks about the extension gain even a little bit of traction, they might decide to wait. Similarly, if the desire is to get established players and not draft picks in return for Leonard, there’s really no rush to get a deal done before Thursday. Even a trade with the Lakers (again, Kawhi’s preferred landing spot) could be done later on without issues, since a 2018 draft pick would not need to be the centerpiece. The draft could come and go and Leonard could remain in the roster without it meaning anything negative, as long as the Spurs remain patient for the long haul.

The worst case scenario would be the Spurs keeping Leonard past the draft, then rushing to trade him if the saga gets worse from a PR standpoint. At this point the situation would be volatile, which could potentially help San Antonio. Suitors surely want to know the chances they have to keep Leonard before trading anything of value, but might get caught off guard and demand fewer assurances if the Spurs called suddenly with a serious offer. Kawhi’s camp hasn’t yet had a chance to really flex its muscles in an effort to get leverage through the media yet, but it surely will. If the Spurs don’t move know but acquiesce to Leonard’s reported trade demand in a couple of weeks, the Spurs could find themselves trying to make a deal without any negotiating power at all.

The Spurs can keep Leonard past Thursday. What they can’t do is let this window of opportunity pass and then cave to a more forceful demand without ever getting the offer they want. That’s what teams on Kawhi’s list of preferred landing spots would love to see happen, in order to get him for cheap.

A lot could happen within the next few hours, or not much at all. Hopefully the Spurs will pick the right course of action, like they have most of the time for the past 20 years. If they do, it won’t matter how long The Summer of Kawhi lasts, we’ll all just be happy that it’s over.