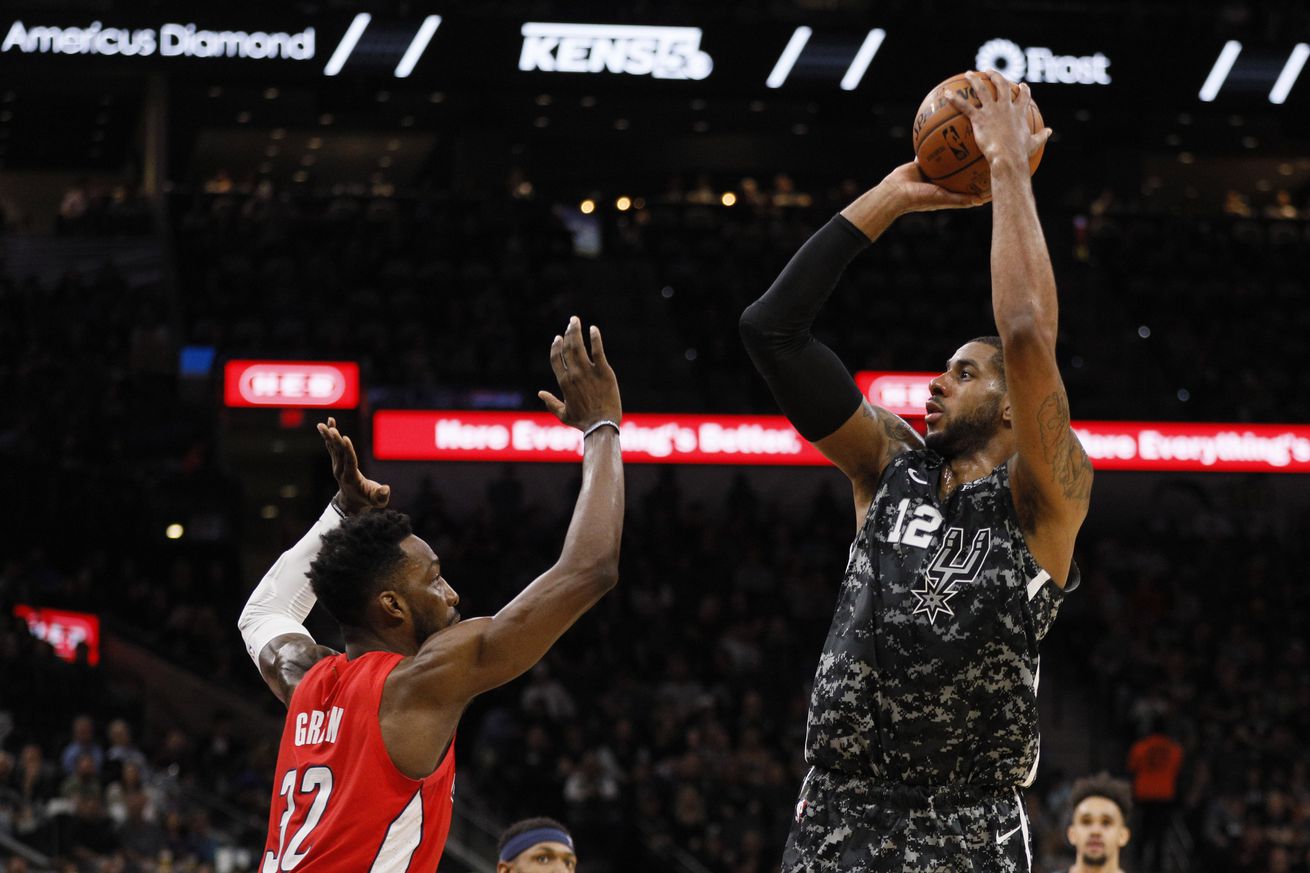 Post-ups aren’t what they once were, and they may never be that way again. That doesn’t mean they’re not an important part of some of the league’s best offenses, including San Antonio’s.

In the antediluvian days of the 2013-14 season, Al Jefferson of the then-Charlotte Bobcats was a bona fide 20-10 player, getting most of his work done through 19.8 touches and 9.3 field-goal attempts out of the post per game. This season, the Spurs collectively pace an increasingly perimeter-oriented NBA with averages of 20.2 and 9.7, respectively, while Jefferson, still just 34, is backing down and drop-stepping opponents as a member of the Xinjang Flying Tigers. The post game, at least as we once knew it, is gone.

And yet, there are meaningful signs of understated value in keeping the relic as a part of your offense. Consider not only the Spurs, 6th rated offense through the All-Star break, but the Timberwolves (12th in offensive rating), 76ers (10th), Warriors (1st) and Nuggets (3rd) who round out the top five in post usage, and there’s likely something to finding the right personnel that can attack the smaller, switchable defenses of 2019 and create breakdowns.

In San Antonio this begins with LaMarcus Aldridge, who leads the NBA with 12.8 post-up touches per game. That number is slightly down from 13.9 last season, but the 33-year-old Spurs big has improved his shooting efficiency from 45.8% to 48% in the process, looking as effective as ever in a league that has made many of his contemporaries obsolete. His 56-point eruption against the Thunder in January was the first 50+ point game in 14 years to come without a three-point attempt, with most of it coming on the block.

If Aldridge was doing this in a vacuum, defenses would gladly live with it. Forty-eight percent on strictly two-point shots is what every modern defense wants out of their opponents, anyway, and here the Spurs are anchoring their starting offense with it. But Aldridge is also posting the best offensive rating of any starter (and fourth on the team) at 111.6, despite his go-to shot being analytically sub-optimal. There are a few reasons for that:

You’ll see the Spurs be especially aggressive at feeding the post when they can attack a smaller defender or if they can establish good position early. Having three capable post-up players in Aldridge, Rudy Gay or DeMar DeRozan usually means that a mismatch is available somewhere, but those opportunities present themselves even more when they’re pushing the pace against an un-set defense.

Aldridge getting up the floor, making that initial bump with his guy and then looking to establish good position is essentially the first of many options that the Spurs offense typically explores. As a result of that focus (and plays like the one below), he’s making 79.3% of his shots with 18-22 seconds left on the shot clock, and 61.9% when there’s 15-18 seconds left.

Post-ups require setting up, and the Spurs are fortunate to have a handful of quality passers with high release points, making front guys like Aldridge a constant risk if a secondary defender is nowhere to be found. Here you see Derrick White, who’s assisted Aldridge more than anyone in 2019, look off the lob before letting Pau Gasol do so from the top of the key.

Playing to their strengths

DeRozan, even in his struggles in the new calendar year, remains a threat to score or pass at any moment and is capable of using his size and craftiness on the block.

Aldridge is too tall or strong for 90% of modern bigs, too fast for the other 10%, and has a small bag of tricks for every matchup. Tweeners and smaller guys are hopeless in single coverage:

Appreciate the comical series of tip-toe moves he uses to patiently get where he wants to against a defender giving up 50+ pounds:

Slower bigs can only hope to rely on their bulk, but they will usually give Aldridge the space he needs to get to his spots:

Even longer, elite defenders like Anthony Davis and Steven Adams, can only do so much. A well-played possession will still, at best, force Aldridge into the difficult turnarounds that he happens to relish taking:

Like Aldridge, Gay is a walking mismatch who is equally happy to pull bigger defenders away from the basket and attack off the dribble or back smaller ones down and set up shots that he can make better than most. He’s made 53.5% of the shots he’s taken out of the post this year.

Post-ups are about far more than post-up shots, functioning as a fulcrum for off-ball movement and regularly forcing defenses to collapse. This is probably more obvious with teams like the Warriors and Nuggets, who have more natural passers backing guys down, but the Spurs’ starting unit is also taking full advantage.

In their case, all the pieces make sense when they go into the post. The strong-side entry-passer is either someone who can capably shoot the three above the break or attack the rim in the event that his man doubles down on the post player.

Going further around the horn are players that need to be proficient shooters at their respective spots and capable of attacking the inevitable close-outs. Gay, who gets the swing pass below, is shooting 51.4% from the corner this year.

The Spurs are still leading the league in 3-point percentage at 40.9% — a fact that, as our own CharlieOCharles noted, has some historical weight to it.

The Spurs are on pace to become just the 11th team to finish a season shooting over 40% from three and will likely join the 2015-16 Warriors as the only teams to do it on over 2000 attempts.https://t.co/HX8vtLP8xp

The Spurs’ inside-out balance is a key to all of this and, just like the post-ups benefit from the added breathing room provided from their three-point efficiency, those same open looks benefit from all the attention guys like Aldridge, Gay, and DeRozan attract.