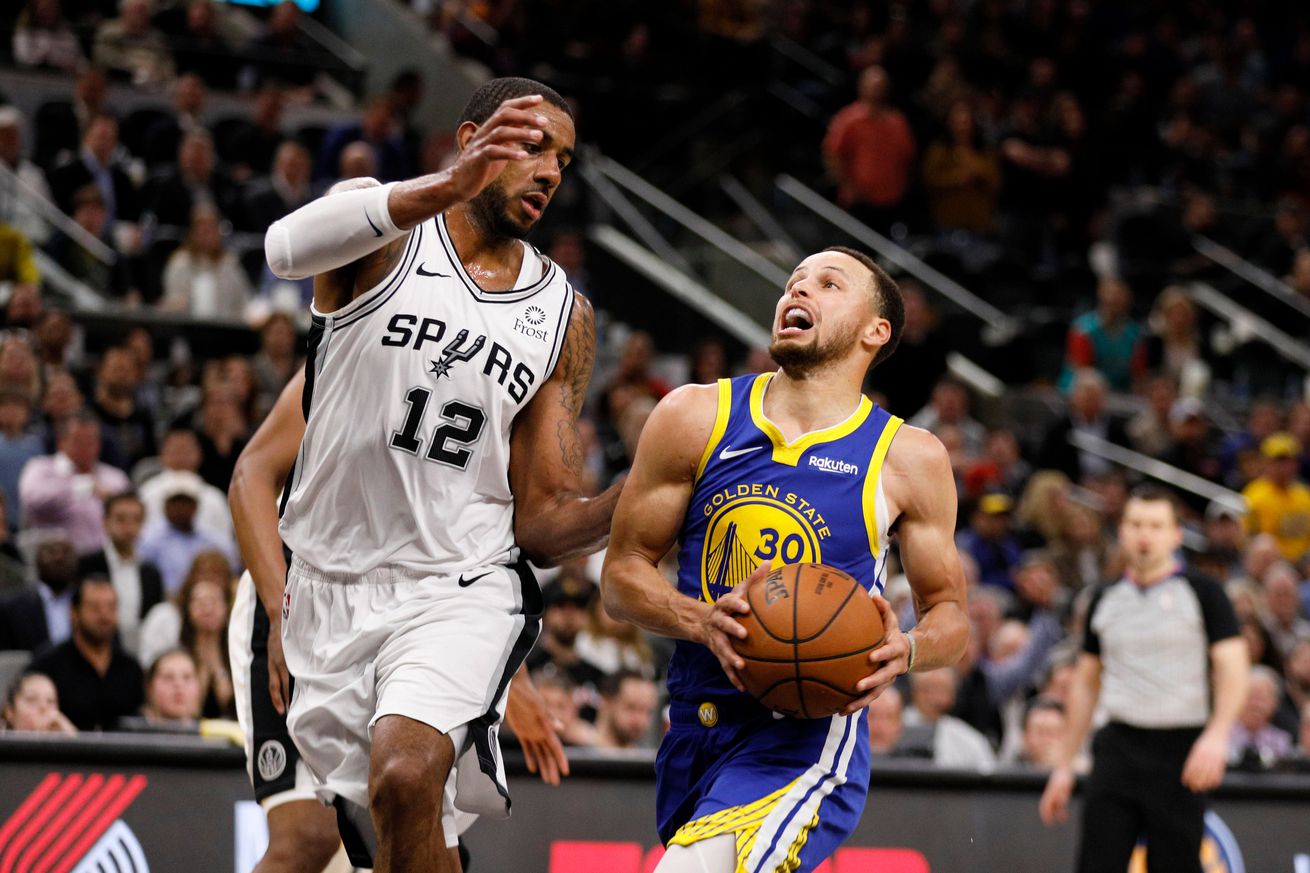 The stats paint Aldridge as one of the worst defensive centers in the league, but the eye test doesn’t agree.

After a slow start of the season, LaMarcus Aldridge has been a rock for the Spurs. He adapted to the center position full-time when the team needed him to, shared touches when asked, and even carried San Antonio for a stretch when DeMar DeRozan was struggling. At age 33 he’s showed no signs of decline, putting together arguably his most well-rounded statistical season as a Spur.

A quick look beyond counting stats, however, hints at a completely different reality. On/off numbers reveal that the Spurs have been better with Aldridge on the bench. Their improvement is monumental on defense, as LA has the worst defensive rating among rotation players. If Aldridge has actually been this big of a drain on the Spurs, it could spell trouble during the playoffs.

The evidence seems damning. With Aldridge on the floor this season the Spurs have allowed over 111 points per 100 possessions, a mark that is slightly worse than their 20th ranked season average. When he’s on the bench, however, San Antonio allows fewer points per possession than the league-leading Bucks’ defense. His seemingly negative impact hasn’t evaporated during the recent winning streak. It’s an extremely small sample size, so take this with a grain of salt, but over the nine straight wins the Spurs were a whopping 29 points per 100 possessions stingier on defense with Aldridge on the bench. It doesn’t appear like he’s being dragged down by poor defenders that share the court with him, either. Real Plus Minus, which is designed to account for teammates and opponents, has him ranked as one of the worst defensive centers in the league.

The numbers seem definitive, but Spurs fans have first-hand experience with on/off stats being deceiving sometimes. Back in 2016 San Antonio had a better defensive rating when reigning Defensive Player of the Year Kawhi Leonard was off the court. It’s understandable to be skeptical. Aldridge has good rim protection numbers, doesn’t foul a lot and in general looks the part of defensive anchor. The Spurs as a team have been doing better on defense lately and his minutes have actually increased during that stretch. There might be a perfectly good explanation as to why most stats seem to hate Aldridge’s defense that doesn’t involve him actually being such a huge liability on that end. It’s clearly a topic that needs further exploration, but the PtR staff offers its first impression on the matter and invites you to share yours.

The Spurs’ defensive rating has been much better with LaMarcus Aldridge off the floor all year, including during the recent winning streak. Statistical anomaly or cause for concern?

Dubinski: That’s not even something I had ever noticed. I’d say its a statistical anomaly simply related to him being on the floor when the opposing team’s best players are on, and while the Spurs bench is nothing to brag about on that end, the level of competition drops off when they’re on. While he can be exploited a bit with quicker offenses, he’s by no means a slouch on D, and I’d still want him out there on defense with the game on the line.

Barrington: If a team is adept at playing today’s positionless small ball basketball, they can exploit a traditional big like LaMarcus by forcing him to switch onto a player he can’t guard. He’s just not as versatile on defense as someone like Derrick White who can cover a variety of positions. But he should keep playing, because what he gives up on defense, he makes up for on the offensive end by bullying smaller players in the paint.

Passos: There’s likely something meaningful behind it, but it’s not condemning in of itself. Aldridge has been the only constant in the starting lineup between last season and this one, and all that turnover is going to make for some funky numbers. He’s also typically matched up minutewise with the best opposing big, which is going to skew things against him, even now when the defense is performing better overall.

Gomez: It’s hard to pinpoint whether it’s a thing or not. Opponents shoot threes at a high level with him on the floor and they do get to the line a lot, but how much of it is LA’s fault is hard to determine. His Defensive Real Plus Minus and his Synergy stats are a mixed bag, is awful but he looks fine out there, at least to my eyes. It’s definitely something to keep in mind and maybe look into more deeply, because Aldridge is going to be on the court a lot for the Spurs in the playoffs.

Wilco: We went over this ground with a fine tooth comb when it was The Nephew who had a massive gap between the eye test and the advanced stats. Back then, it turned out that there was a lot of noise in the numbers, and it wasn’t anything to solve for. I suspect that the same is the case with LMA too, and I’d be surprised if we’re having this conversation about his defensive numbers after a third of next season has been played.