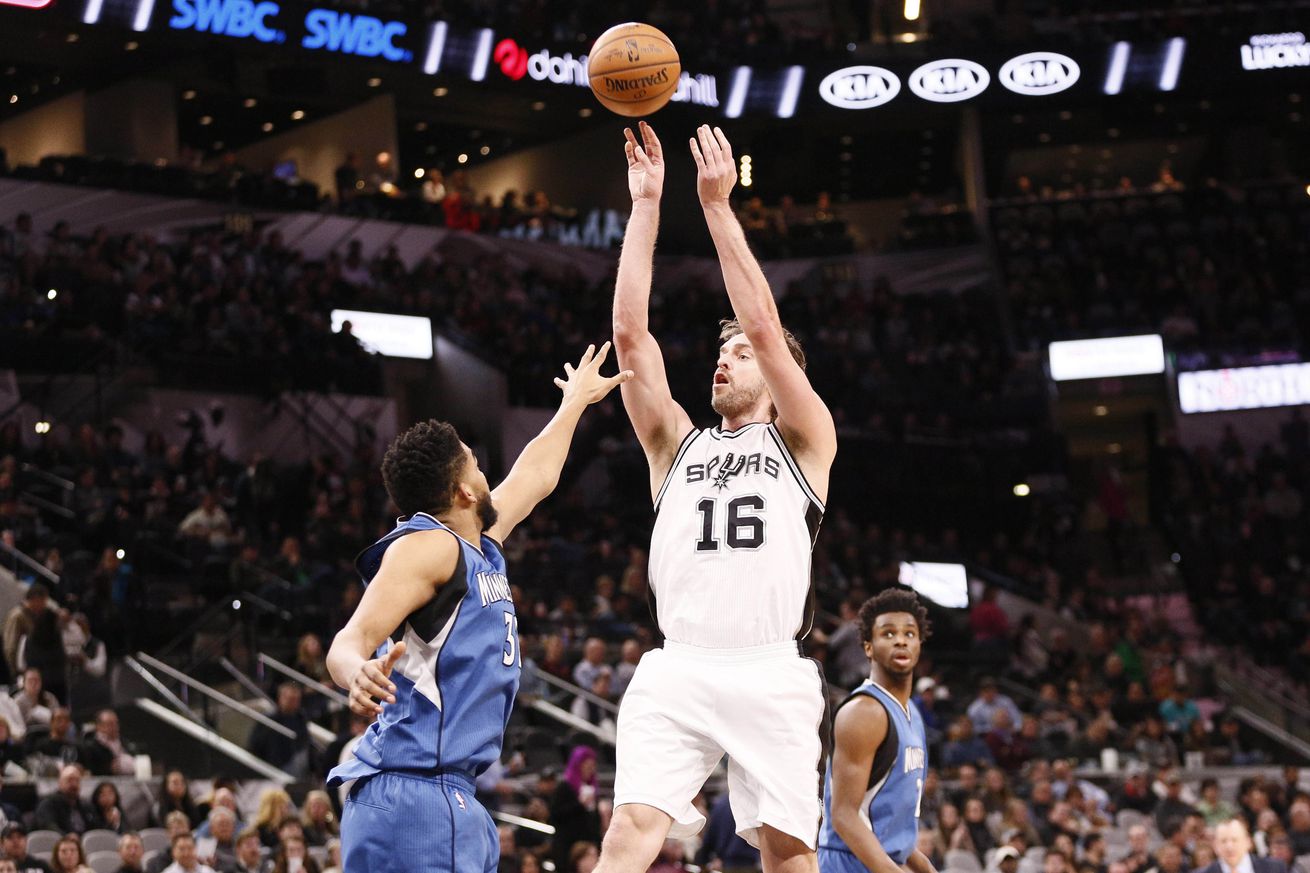 Could anyone have predicted that the Spurs would turn Pau into the league’s premier long-distance shooter? Maybe…

As you may know, I make my home in LA. I spent many years living a double life as both a Laker fan and a Spurs fan before going all-in for the Spurs several years ago. As a result, the years between 2000 and 2010 were very, very good for me – virtually every year one of my teams played in the NBA Finals.

The last good years in Laker-land came about because of the last good trade the Lakers made, when they acquired Pau Gasol from the Grizzlies. My familiarity with Pau came in handy when PtR czar J.R. Wilco asked me before this season to provide a former Laker fan’s view on what Spurs fans could expect from Pau in San Antonio.

Now that the regular season is (mercifully) over, I thought it was time to take a look back at my Pau piece. One key point I noted was that, much like the Great Tim Duncan, Pau has been remarkably consistent through the years. I noted that the Older Pau that played with the Chicago Bulls in 2015-2016 complied very similar numbers as Prime Pau with the Lakers:

How did Pau’s stats with the Spurs compare? While his overall numbers were down because he only played 25 minutes a game (instead of 37 in LA and 32 in Chicago), his per 36 minutes stats for this season were 17.8 points per game, 11.2 rebounds, 3.3 assists and 1.6 blocks. Virtually identical to the 18/11/3.4/1.7 line Laker fans enjoyed from Prime Pau in purple and gold.

In fact, he blew away the competition. Kyle Korver was second at 45.1%. And, yes, Pau shot enough threes to qualify. Here’s the complete list of the top shooters in 2016-17.

Even more remarkably, Pau set a single season record for three point percentage. The record going into this season was Kyle Korver’s 53.6% in 2009-2010 with the Utah Jazz. Not anymore. And Pau breaking that record is surely something no one predicted.

Of course, the high three-point shooting percentage masks the fact that (while his overall field goal percentage was over .500) his two-point percentage was again below 50%. I suppose that means Pau should take after my game and fire up more threes. Let it fly!

Finally, the elephant in the room is Pau’s defense. In my pre-season piece, I wrote:

Like the great Duncan, he plays excellent position defense, and like TD, rarely jumps. (Of course, this is the best possible spin on his defense – while he is average or slightly above, he is no Tim Duncan.)

I don’t think we can honestly say that Pau was “average or slightly above” on defense for the Spurs. Indeed, I am fairly confident that one of the reasons Pop has been happy with Pau coming off the bench, instead of starting, is that Pau doesn’t have to defend the other team’s best post players as much. Perhaps more importantly, it also means he doesn’t have to defend the other team’s starting point guards on the pick and roll – put simply, he can’t.

With opposing teams shortening their benches for the playoffs, it will be interesting to see if Pau’s minutes decrease in the playoffs. If that happens, you can be sure it will be based on his defense, not his offense. As predicted here before the season, the Spurs offensive system has been very, very good for Pau Gasol.