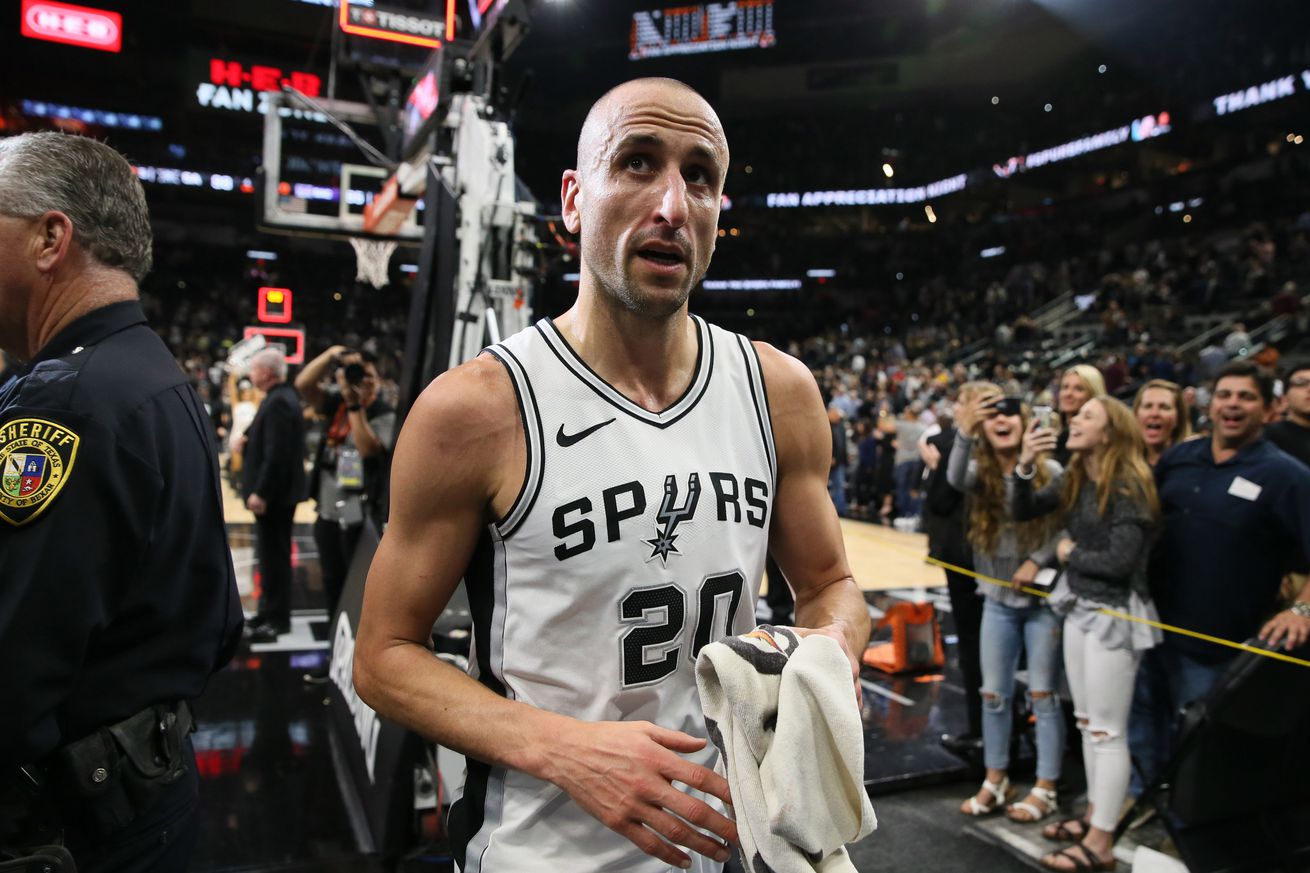 When a legend retires, the world comes together to show their appreciation. In this case, in the wake of Manu Ginobili’s announcement, he is being shown plenty of love on social from all around the NBA. Obviously it is impossible to capture them all, so feel free to post more reactions in the comments below. (Click here if you need a quick tutorial on how to embed social media posts in the comments.)

I competed against you for 9 years. I sat through countless pregame meetings discussing how not to let you go to your left hand because when you do, you’re impossible to stop! Then, I became your teammate and got to witness first hand how you bring way more value to a team than just scoring. You’re a ultimate competitor and a “team first” kind of guy. You lift the culture in an organization just by simply being around. You were even successful in getting me to participate in more team activities than I have in my entire career. It was an honor competing against you, but even better competing with you on my side. Thanks Manu! #graciasmanu

THANK YOU For Teaching Me What It’s Like To Be A Real PRO On And Off The Court @manuginobili The Game Will Miss You & Forever Remember You!! pic.twitter.com/ahWJxait4r

It was a pleasure going to battle with one of the goats @manuginobili in just one year I learned so much from this guy. #gramps #hof #legend #spurs

We’re definitely gonna miss Grandpa Juice @manuginobili out there. I’m lucky I had a chance to play alongside with you. True example of how it’s done the right way. Thanks for everything that you have done for the @spurs and the game of basketball, learned a lot from you! #GoSpursGo #GrandpaJuice

Ci sei stato all’inizio, ci sei stato nel momento più alto… grazie di tutto. Per me sarai sempre un idolo! You were by my side at the beginning, you were by my side in the brighter moment… thanks for all. You’ll be my idol forever! @manuginobili pic.twitter.com/rVPQMyUjVV

A legend!! Incredible competitor and career. Blessed to have learned from one of the best ✊ https://t.co/c5UvP8kxLC

One of the greatest guards of all time! The game will miss @manuginobili Salute! https://t.co/syZa1Ri7aX

Manuuuuu! Gracias! Thanks for helping me in so many things and make me a better player! All the hints and advices, on and off the court. Thanks , specially for those easy buckets I knew I will get every game . Enjoy retirement and welcome to the club! Obrigado

Wow what a career @manuginobili it was a pleasure sharing the court with you, learning from you, the amazing team dinners, and long flights with great conversations and then competing against you! You will be missed Thanks For Everything #LivingLegend #20 #Batman

@manuginobili retired from the @NBA Listen to Episode 3 to hear @DGreen_14 talk about Manu’s career & last season at San Antonio at the 34 min mark of @GreenRoomInside Danny and @hidefsanford spoke about a statue to honor him…https://t.co/FDd8aDu2ZM pic.twitter.com/TTEfJFIwvS

Manuuuuuu! Noooooo! There has been no one like you, and there won’t be again. You have made us all proud. Enjoy your beautiful family and the next stage of your journey.

You’ve earned it @manuginobili
Words can’t express how awesome it was being your teammate and what you’ve meant to the entire @spurs organization and San Antonio community. You are beyond a legend on and off the court! The pride of Argentina! Enjoy your rest my friend! https://t.co/XfkS7GIY9a

Leadership is not about a title or a designation. It’s about impact, influence and inspiration. Impact involves getting results, influence is about spreading the passion you have for your work, and you have to inspire teammates. Not one day he didn’t own all three. pic.twitter.com/hJraB1Z19I

@manuginobili Congratulations on one helluva career brother! It was a pleasure to match up against you over the years. Regular season, Finals, National Team, didn’t matter was always a treat! The game of basketball has you to thank for the most swag move in..

basketball right now which is the “Euro Step”!!!! God bless you, thanks for the playing the game the right way and for the competition!!!

What a player @manuginobili! A pleasure to compete against you and enjoy your greatness. Congrats!

Congrats on an amazing career @manuginobili. You embody how basketball is meant to be played. With Passion, joy, and obviously a Champion through and through. Inspiration many sir. pic.twitter.com/Z86WgYFVMk

One of the best to ever do it. Thank you @manuginobili for pushing the game forward and for showing players all around the world what i true champion looks like. #HOF

Thank you for being a fierce competitor on the court @manuginobili, impacted the game for generations to come! #Ginoooooooooobili

One of the reasons I wear number 20! Congrats @manuginobili on a great career! pic.twitter.com/rA2wewYbKV

Hell of a career @manuginobili . One of the best to ever do it. Pick and roll genius. Euro-step king. Hated trying to force you right in the pnr knowing you would still snake back to the left hand. I’ve borrowed a lot of your moves and set-ups. The game will miss you !

Congrats to Future Hall of Famer @manuginobili on your retirement! I’ve always admired your game and it won’t be the same without you.

One of my first “welcome to the league” moments. Thank you for what you have done for your fellow lefties and a bringing an unmatched level of creativity to the game. Much respect! @manuginobili the game will miss you! @nba pic.twitter.com/XUljnFGSRk

Great career! From his professionalism, selflessness, changing the game by bringing the euro step into the NBA, and becoming a champion! https://t.co/8cYLy5NENJ

@manuginobili , you were the main person I looked at when deciding I was gonna be a 6th man for good. Your style, talent, competitiveness, and will to win will be truly missed. Nothing but respect! #best6thman pic.twitter.com/gHsjX9yPvY

What a career!!! @manuginobili #Legend

It’s a real honor to have competed against you, @manuginobili ! The definition of a winner ! #GraciasManu pic.twitter.com/dkIlk0y13c

The @NBA is going to miss you @manuginobili. Appreciate everything you did for the game of basketball! #Lefty #EuroStepKING #HallOfFame

The Euro Step Legend will be missed! Fair to say he changed the game in a unique way! Congrats on a beyond amazing career @manuginobili !!

What a career! So much respect for Manu! Legend! #ThankYouManu https://t.co/gRzof1oAsS

Big thanks @manuginobili for pouring your heart into the game and inspiring generations!! Cold blooded southpaw! #madeunorthodoxcool

Inspired a generation, Left the league better than you found it, and by far one of my favorites to watch and compete against. Thank you!#respect #Ginooooobliiiiiii

.@manuginobili You are true champion my friend and one of the best I have ever matched up with. Enjoy life after the game hermano. You deserve that and more. pic.twitter.com/g5qtYlsNMA

One of the most unique players I’ve ever had to defend. You changed the game @manuginobili. Congrats on a great career! See you @hoophall someday soon! #GraciasManu pic.twitter.com/nNYdF0wa40

Shout out to @manuginobili on a legendary career! He knows how to compete and he knows how to WIN. 16 seasons. 4 championships. Surefire Hall of Famer. #GraciasManu pic.twitter.com/cj4BjIfbtC