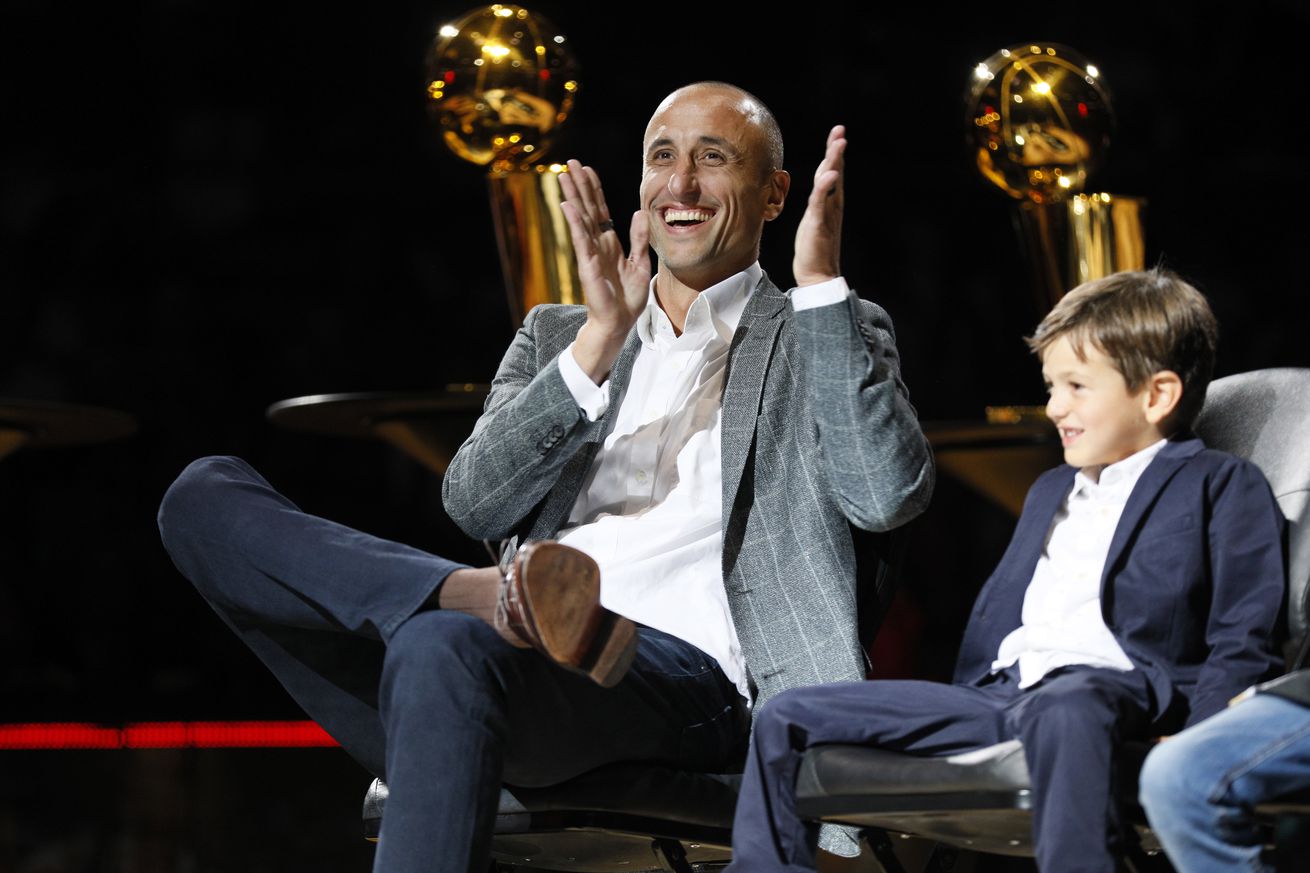 Just a handful of the reactions and highlights from Manu ‘s jersey retirement.

Nowadays, whenever there’s a big event, social media lights up. Last night was no different for Manu Ginobili’s Jersey Retirement Ceremony, so we capture as much as we could, from his former Spurs teammates, to video tributes and reactions from all around the NBA.

Unfortunately Tiago Splitter couldn’t be in San Antonio yesterday, but he was there in spirit.

Gracias por todo Manu @manuginobili you know why I couldn’t be there in San Antonio today… but my heart was there! Enjoy retirement, enjoy your beautiful family! I miss setting screens to you! #20 #graciasmanu

It was only right to honor you with your famous ‘air punch fist pump’ and let the passion come pouring out.

My Gramps, congrats on your special night. pic.twitter.com/QHAAxpwNgQ

To the guy I’ve learned so much from on and off the court, no one more deserving! Congratulations! @manuginobili #wishicouldvebeenthere #GraciasManu

I remember in the .2 seconds I had to catch it thinking, “Please don’t mess this up!” #GraciasManu @spurs https://t.co/qMzhPV5DtU

This flexibility comparison definitely helps explain how @manuginobili was able to play in the @NBA until the age of 40 #GraciasManu @spurs pic.twitter.com/Fz3uv56RBa

What an incredible moment! You deserve this and much more, legend. #ManuDay!!!! https://t.co/nug2h6JkU2

¡Gracias Manu! Thank you @manuginobili for moments like this … and many, many more fantastic memories #GraciasManu pic.twitter.com/Yy71esZBh2

What happened last night was beyond overwhelming. Still trying to digest what went on in there! Thanks!
Lo de anoche fue totalmente abrumador. Espero poder digerirlo alguna vez. Impactante. Gracias!

Hey, look down there! It’s The Nephew! Did anyone notice he was not in any highlights, video tributes, or even mentioned once last night? Very fitting and appropriate. (And no, he’s not down here instead of under “teammates” out of spite; it’s because these NBPA videos feature multiple players from both the Spurs and across the league, so this is where they’re going.)

Paying homage to @manuginobili and the Euro-Step, the 450 get together to talk about his patented move and the imprint he left on the game for generations to come. #GraciasManu pic.twitter.com/Vz1kWVILEw

Before the @spurs raise his jersey in the rafters, the 450 collective rounded up their favorite @manuginobili moments and give thanks to the international icon. #GraciasManu pic.twitter.com/DxbrMTD7ow

One of the best that’s ever done it. Congrts @manuginobili on an amazing HOF career! https://t.co/FtoHFV8N1D

Words are hard sometimes. Especially when you decide in the moment that you’re going to try to describe on live TV what a privilege it was to work with @manuginobili. I tried. And I’m grateful for #20. #GraciasManu pic.twitter.com/4902vdLjK0

I don’t mind admitting I got tears in my eyes as Manu Ginobili’s retirement ceremony just ended. As Pop said, “There would’ve been no championships without Manu.” In competitive will, Pop put Manu in the same sentence with MJ & Kobe. All-time winner. #GraciasManu.

“Manu Ginóbili is easily all-time top 30, and in winning impact, I can make a very strong case he’s all-time top 10 because there’s never been anything in the NBA quite like Manu Ginóbili. … Gracias, Manu.” — @RealSkipBayless pic.twitter.com/XIZWBKY84B

The GIF that will forever live on in Spurs lore. Tony especially makes it priceless at the end.

“I gave everything I had, every game…”@manuginobili reflects on an incredible 16-year career with the @spurs. #GraciasManu pic.twitter.com/zVSwXRTn9d

Tim Duncan recalls his thoughts when he watched Manu Ginobili get drafted by the Spurs… #GraciasManu pic.twitter.com/tY7yzMhy3P

In case anyone was wondering what was up with Timmy mispronouncing Manu’s name, he was imitating the night he was drafted:

“Popo, you are a sensitive, generous, caring, smart … madman”

And finally, no Manu Moment is complete without one more GINOBILI!!!!!! from Charles Barkley:

I’m sure there is plenty more out there, but it is impossible to capture everything. Feel free to post more in the comments below!