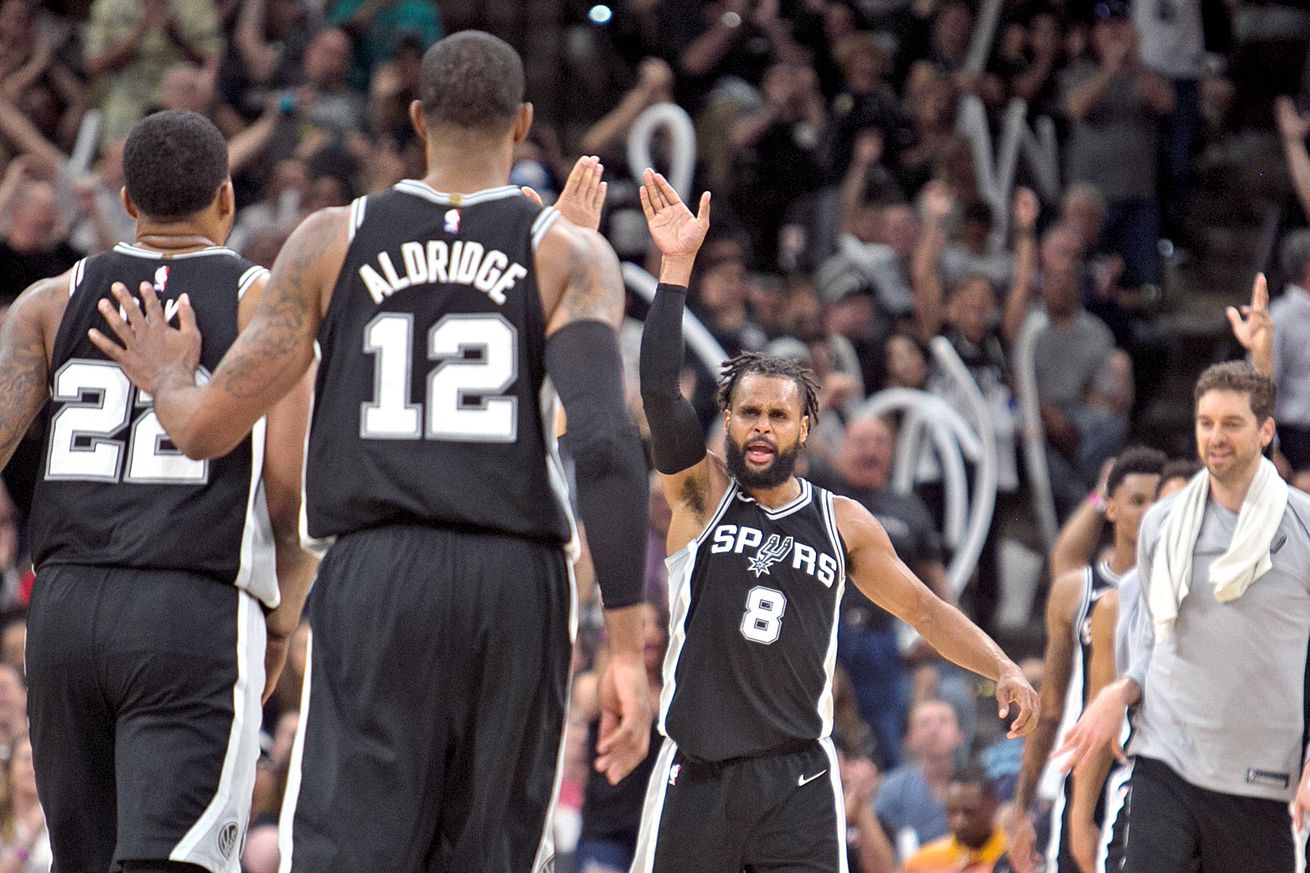 A look ahead at the most telling stats for each Spur this season.

Some stats tell a story of how a player’s season is going, denoting development in a particular area, how well they’re fulfilling their role, or their general value to the team. Like last year, here’s an article specifically about predicting which numbers might be most meaningful for each Spur.

Also like last year: some of these choices will matter more than others. Much of LaMarcus Aldridge’s bounceback campaign fell on his dominance in the post, and it was fairly clear going into the season that his performance there would be a bellwether for his greater impact. After averaging 0.87 points per post-up possession in 2016-17 (good for the 45th percentile of efficiency), he upped that to 0.99 (80th percentile) in almost twice as many possessions per game. There were other reasons why he finished on the All-NBA Second Team, but his work in the low block was extremely important. Davis Bertans needed to contribute on the defensive boards to earn playing time, and he showed notable improvement there in his second year. He shot past his 2016-17 defensive rebound rate from 10.5% to 13.9%, eclipsing the 12% over/under I set for him. Manu Ginobili’s two-point field-goal percentage (50.6%) wasn’t the only reason his last season was a success, but his effectiveness in scoring in traffic was one sign of the pep he kept in his step until the very end.

The same can’t be said for Kyle Anderson (another season with a low usage rate didn’t stop him from asserting himself as a highly serviceable role player) or Dejounte Murray (whose defense and rebounding made up for subpar playmaking). I’ve tried to learn from those bad calls in the effort to make entirely new ones this time around.

The Spurs have a logjam in the backcourt, and a handful of high-upside youngsters and proven vets to turn to. The 25-year-old Forbes doesn’t really fall into either of those groups, nor does he offer much in the way of playmaking, defense, or rebounding to make him an easy plug and play on any given night. After pacing the team in shooting beyond the arc in 2017-18, it could be that same quality that makes the difference between whether or not he remains in the rotation next season.

Walker has all kinds of potential as a pro, but who knows how much of that will show in his first season. Derrick White came in four years older and played a total of 139 minutes as a rookie, spending most of his time in Austin — will Walker get more of a chance to make an impact?

PATFO are invested in Metu, the rare second-round pick to earn a guaranteed deal with the Spurs. What that means for year one is uncertain, although some time in Austin, as with Walker, should be expected. However, given that Aldridge and Gasol will both probably get the occasional night off, there’s a clearer path for Metu to get minutes than his fellow rookie, and there are sure to be particular parts of his game that will initially go under the coaching staff’s microscope. We’ll start with an easy one and see how Metu holds up in securing the defensive glass against NBA bigs. For a prospect whose effort level and focus were scrutinized going into the draft, seeing him overachieve here would be a positive sign.

Belinelli posted a career-high 43% on threes and 5.9 win shares (also a career best) as a Spur in 2013-14, so it’s safe to assume Pop will know how to best utilize his skillset. One unique dynamic he brings is the ability to shoot on the move, including when coming around screens, which forces opponents to either overcorrect in anticipation and open up new offensive actions.

Belinelli finished in the 85th percentile last season in that stat last season, averaging 1.19 points in almost two attempts per game, and he could help the Spurs put defenses in some tough situations by excelling there again.

With the final year of his contract only partially guaranteed if he’s waived before July 1st, 2019, Gasol’s days in San Antonio might be numbered. Still, with less pressure to make plays next season, and with a cleaner bill of health (a March shoulder injury really slowed him down last season), he could trend back towards the offensive efficiency he showed in his first season as a Spur — even as his minutes continue to decline.

More than any one stat, the multifaceted Gasol’s case to remain a key rotation player may depend on the very last line of the box score and his net impact on the win column.

The Summer Spurs put the ball in White’s hands plenty this year, and he impressed as a scorer and playmaker off the dribble. His versatility should serve him well with the team expected to give him a look in year two, and it would be a revelation if he emerged as a viable, efficient option as a scorer in the pick and roll.

Nearly half of Cunningham’s FG attempts last year were catch-and-shoot threes, of which he made 34.5%. His numbers won’t likely jump off the page in San Antonio, but being anything above an average spot-up shooter will be a plus.

Look, Murray should get better offensively — I’m just not sure how that will shake out. What I do know is that the Spurs are without three of their four best perimeter disruptors from years past. Only Murray remains, with a chance to further carve out an identity after being voted to the All-Defense 2nd Team last year. Both his 2.1 deflections and 1.2 steals per game should go up with more minutes, but the former might be a better indicator of the playmaking he’ll bring on the defensive end.

Mills has long been the Spurs’ iron man, missing a combined three games over the last three seasons and finishing top five in the NBA in average speed on offense four seasons in a row, as he sprinted across the floor to stretch defenses and get open looks from deep. That run ended last season, when he was asked to assume more traditional point guard duties and create off the dribble while the Spurs eased Murray into the starting lineup. As a result, his average offensive speed fell below 5.2 miles per hour for the first time in half a decade.

I like the Bala’s chances of bouncing back by him doing more of what he does best, which should happen with DeRozan’s arrival, Murray’s development, and White’s potential ascendance. That, and a clean bill of health, should be reflected in this stat being back in the 5s.

With Gay another year removed from his Achilles injury and having a full year of experience in the Spurs system under his belt, he should be able to improve upon an up and down 2017-18. That should translate to a more meaningful role down the stretch of tough games.

The Spurs had a total of 138 clutch minutes (situations in which the game is within five points with under five minutes left) last season. Patty Mills appeared in the most clutch minutes with 124, almost 90% of them. He was followed by LaMarcus Aldridge, Kyle Anderson, Danny Green, Dejounte Murray, Manu Ginobili, Bryn Forbes, Davis Bertans, Pau Gasol, and then Rudy Gay, who appeared in under 32% of clutch time. Part of that was due to injury; part of it may have been a lack of trust from the coaching staff to close games. Hopefully both play less of a role in his second season in San Antonio.

4.2 is probably on the low side considering the Spurs’ $14.5 million investment in Ser Davis Threeworth, but it’s a good place to start. Bertans’ value stems from his ability to bomb away, and I’m hoping to see plenty of it next season.

The Spurs don’t foul, finishing best in the league in fouls committed and opponent free throws made per game last season. Among all rotation players, no Spur averaged more than 3.5 fouls per 36 minutes, and the two traditional bigs, Gasol and Aldridge, averaged 2.4 and 2.3 fouls per 36, respectively. That’s noteworthy on its own, but all the more impressive considering they were fourth in the NBA in blocks per game.

Poeltl averaged 5.0 fouls per 36 in his sophomore season. That’s already much better than the 6.5 he did as a rookie (and more encouraging, considering he also doubled his blocks per 36), but it was still most on the Raptors despite him playing the sixth-most minutes. While some of those whistles may come from his aggressiveness in battling for offensive boards, he was also eighth in the league in shooting fouls committed according to NBA Miner, which is a tendency that won’t mesh well with the Spurs’ defensive system.

LA will still get his post touches, although they can be expected to drop significantly from the league-leading 9.4 attempts per game he averaged last season with another ball-dominant star in the mix. Meanwhile, the catch-and-shoot attempts, which fell from 5.8 in 2016-17 to 3.7 in 2017-18, should trend the other way. Mix in a potential upward trend of three-point attempts and this is an area worth keeping an eye on for a player whose career longevity will benefit from less battles on the block.

Tony Parker paced the Spurs with 3.5 assists per game last season, so it’s safe to say the playmaking from DeRozan, who’s averaged 4.0, 3.9, and a career-high 5.1 assists per game the past three years will be huge for a San Antonio team lacking in off-the-dribble shot creation.

The Spurs can ease the burden on Dejounte Murray by putting the ball in DeRozan’s hands, and there’s an argument to be made that the former Raptor should be the team’s primary ball-handler.

He’ll still get his fair share of points, but what might really push the Spurs offense forward is how DeRozan settles in as a facilitator in year one in San Antonio.