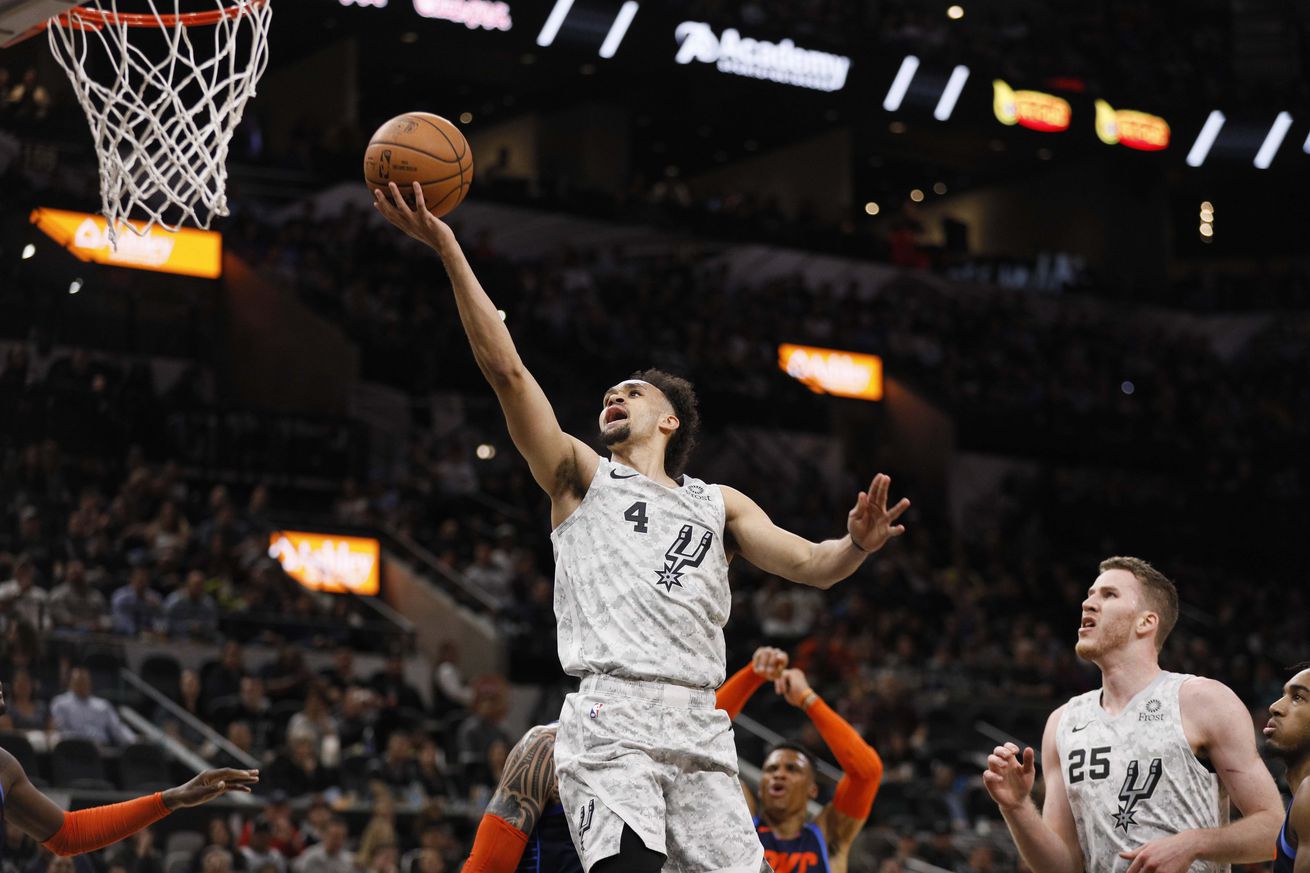 Derrick White has the green light on offense, and the Spurs are at their best when he uses it.

The Spurs’ resounding victory over the Thunder on Saturday night served as yet another showcase for Derrick White’s emergence as one of the best young point guards in the league. With 14 points on 10 shooting possessions, 8 rebounds and 2 assists in less than 30 minutes, Derrick was efficient and effective the entire game.

He was especially deadly as an outlet and secondary option. Without Paul George, the Thunder defense was unable to close the gaps and seams quickly enough to keep Derrick out of the paint, and once there, he wrecked havoc.

It started early, with Derrick scoring the game’s first points by attacking off a kick-out from DeMar DeRozan.

DeMar weaves his way into the teeth of the defense from the right side and hits Derrick on the left wing. Russell Westbrook has been ball watching and is a bit out of position, leaving an open lane to the rim. Steven Adams is just a beat too slow to stop penetration and Derrick slides between him and Jerami Grant to the front of the rim, where he lofts a floater high off the glass and into the cup.

Five minutes later, he got another chance to attack a compromised defense.

Grant shows hard on the pick and roll, forcing DeMar to toss the ball back to LaMarcus Aldridge at the top of the key. Grant and Terrance Ferguson’s long arms force DeMar to put more air on it than he’d like, and Westbrook sees the ball floating through the air and can’t help but go for the steal. He’s just a beat late, though.

LaMarcus comes down with the ball and takes one hard dribble before kicking it out to Derrick on the right wing. If LaMarcus had held onto the ball just a hair longer, putting his shoulder into Grant a little before kicking it out, Derrick would have had a wide open look here. But as it is, Grant immediately closes out, running Derrick off the line.

Ferguson drops down into no-man’s land, sort of threatening to defend Derrick but not really doing anything. Behind him, Westbrook isn’t even threatening to defend anyone, having stopped hustling once he missed out on his steal attempt (this isn’t RWB bashing… a lot of stars do this, including, at times, the Spurs’ very own, very beloved DmDr).

With Adams on Jakob Poeltl and Dennis Schroder digging down on LaMarcus, Derrick has two good options. He can take the open floater or hit Bryn Forbes on the left wing. But Derrick makes up his own option, looking Schroder off with his eyes and a clever lift of the ball, before dumping it down to LaMarcus for an easy layup.

Derrick also did a great job attacking the defense early in transition and semi-transition, with half his field goals coming in the first 8 seconds of the possession, including this beautiful split of the Thunder’s pick and roll defense.

Derrick gets Westbrook leaning into the screen before crossing back over to his right, then reads Adams, searching for an opening. Adams expects Derrick to attack immediately and slides quickly to his left to cut off penetration, but Derrick’s not in a rush, and his pace puts Adams out of position. The crossover he used to get back to his right was less a move to the side and more a redirection while continuing forward, giving him a decided advantage for his next move.

Seeing the gap opening between Adams and Westbrook, Derrick takes a quick dribble as he knifes back towards the paint and scoops the ball up over Adams swiping hand then lays the ball gently in the basket.

Westbrook calls for the travel, but as you can see, Derrick’s left foot is down when he gathers and he takes just one more step with each foot.

Alongside DeMar and LaMarcus, it will be difficult for teams to game plan for Derrick. He appears to have the full bag on both ends of the court — this could easily have been a post about his excellent defense on Westbrook, along with 3 steals and a block — so he shouldn’t be affected much by scheming. The one issue he may run into is a bit of a reluctance to shoot. That’s healthy in point guards, to an extant, but he’ll likely need to be more aggressive at times as the team moves forward.

This game marked just the 11th time this season he has taken 10 or more field goals. Patty Mills, Bryn, and Marco Belinelli have all done it more often. It’s not just a matter of playing time and lost games to injury, either. Of the team’s 9 core rotation players, Derrick takes the 7th most field goal attempts per 36 minutes, ahead of only Jakob and Davis Bertans.

For the Spurs to become the best version of themselves, that likely needs to change.