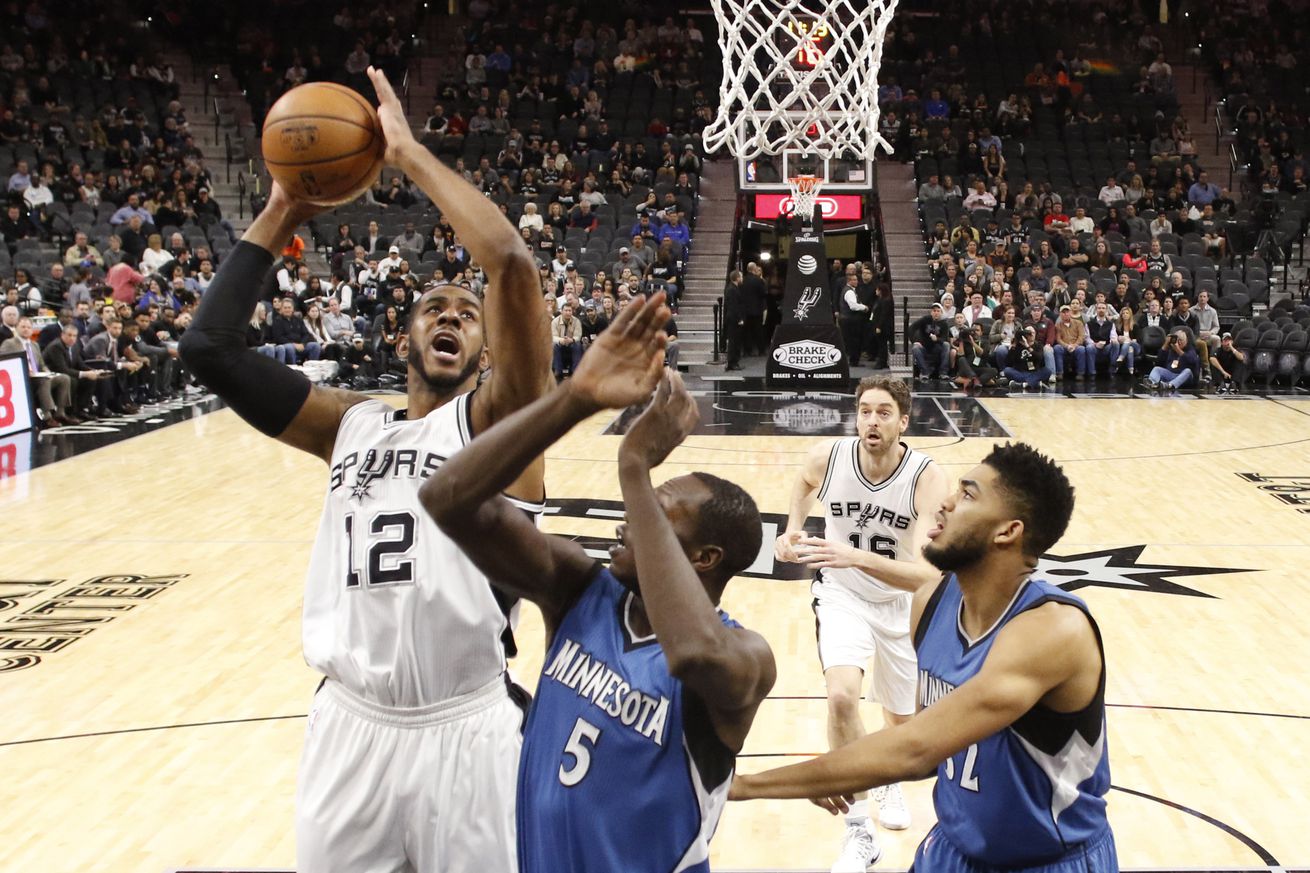 A closer look at the plays that helped San Antonio overcome Minnesota.

After the game, Gregg Popovich talked about the Spurs win over the Timberwolves and said, “Once again, as we have done very often, it was a tale of two halves.” We’ll dive into plays from the whole game and see how San Antonio made it past Minnesota.

Let’s start with the highly contested first half showing some two man hustle action. After fighting for the rebound, Kawhi Leonard takes it coast to coast and passes to LaMarcus Aldridge for the dunk. This was a terrific game to see the individual strengths of both of the Spurs best players.

As Patty Mills gets control of the ball and passes to Kawhi, who drives and becomes surrounded by four defenders. So he passes to LaMarcus who passes quickly to a open Manu. Without hesitation, Manu shoots and makes the three.

Starting the second quarter, we see Pau Gasol hand off to Tony who drives and passes out to Jonathan Simmons, who males a nice drive and lay in for two.

This play begins with Manu passing to Kyle Anderson, who drives in, picks up defensive pressure and makes a great little flip pass to a waiting LaMarcus down low for the two.

Moving to the third, we find Kawhi driving and kicking to Danny for a three. After allowing the defender to fly by, Danny’s attempted shot rims out, but LaMarcus with excellent anticipation, comes in from the foul line and cleans it up with a dunk. This was a outstanding hustle play from LaMarcus that tied up the game at that point.

Towards the end of the third quarter, we find Dewayne Dedmon with a steal who hands it off to Patty. It is so good to see LaMarcus run the floor, get ahead of the opposition and lay the ball in for the two on the run.

Here is a play that typifies the team ball shown by the Spurs to take over the game. We see Patty as he begins his probing, he drives around a David Lee screen, moves left and finds Lee open for the pick and roll. Lee goes up with the right hand but the ball does not fall. With no hesitation, Dedmon gets the ball and goes back up for the score.

As the final play, we find Kawhi bringing the ball around but three defenders collapse on him with only 2.8 seconds left on the shot clock. So he passes out to a open Danny Green for the buzzer beater three. Oh mama.

The Spurs bench has outscored or matched production of the opposing reserves in 28 of its first 40 games as per Covers.com. Before Tuesday, the Spurs bench were first in the league in assists per game (10.2) and three point percentage (.398). The Spurs bench outscored the Timberwolves bench 37-21 for the night and the win.