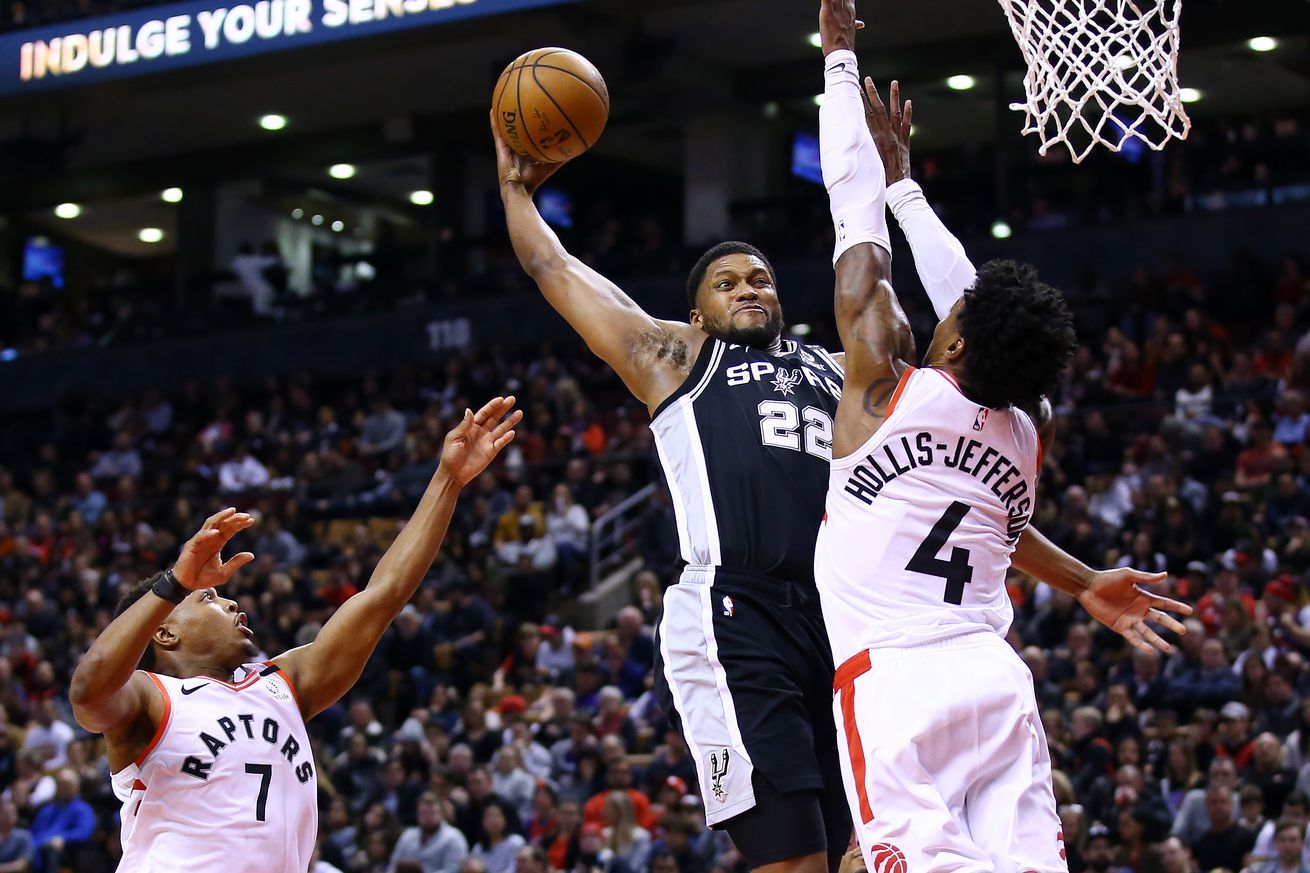 The Spurs turned up the intensity to stun the Raptors and erased an 18 point deficit.

I wouldn’t blame you if you checked out of the Spurs game early and found something better to do with your time. San Antonio was down by 18 points with 4:34 left in the third quarter, shooting less than 40% from the field, and a comeback felt out of reach.

Despite having the odds stacked against them on the road, the Silver and Black kept their chins up and went to work chipping away at Toronto’s lead. The rally started with a booming rim-rocker by DeMar DeRozan, stayed alive behind an impenetrable zone defense, and culminated in a clutch triple from unlikely hero Marco Belinelli.

The good guys stormed ahead by 9 points in the final frame, but in typical Spurs fashion, the contest wasn’t without crunch time dramatics. And though it may have been nail biter down the stretch, their resurgence was accompanied by a wealth of highlights.

Let’s first revisit the DeRozan posterization of Chris Boucher that revitalized San Antonio when they needed a spark to get their engines running. Not only was it one of the best dunks by a Spur this season, but it was also one of the best jams the NBA has seen all year long.

As if his first slam wasn’t enough to get everyone out of their seats, DeRozan came back for seconds a few possession later and stuffed home a two-handed tomahawk. Kudos to Derrick White for the nice find in transition, and apologies to the rim for enduring some more punishment.

For a moment, San Antonio turned back the clock and flashed a bit of beautiful basketball movement that made the 2014 title team so special. The fastbreak began with Marco (one of two remaining members of the 2014 Spurs) and ended with Trey Lyles ringing the bell for two more points.

And I guess Rudy Gay was feeling a little left out of the Dunkfest, because he almost tore down the shot clock with this one. The fourteen-year pro was a thunderous finisher early in his career, and he reminded everyone why the NBA selected him for the Dunk Contest his sophomore season.

Patty Mills has yet to record a single dunk in over a decade in the league, so you can probably guess he didn’t get in on the high-flying festivities. However, he did contiribute to the comeback with a timely triple to bring San Antonio within a point of the Raptors.

Even when his shot wasn’t falling, the scrappy Aussie used his nose for the ball to follow his misfire. Though Toronto outhustled the Silver and Black for most of the game, Patty rarely finds himself outworked on any play.

While Belinelli has been the subject of his fair share of fan negativity (myself included), the Spurs would be another game deep in the loss column without him. There’s something poetic about a pair of former Raptors teammates connecting on a sequence that gave San Antonio the final lead of the contest.

Now I realize this rejection came early in the second period, so it doesn’t necessarily belong among the comeback highlights, but White was a huge part of the turnaround, and he deserves some credit. The third-year guard tallied 9 points, 2 rebounds, 2 assists and a block in the fourth quarter alone.