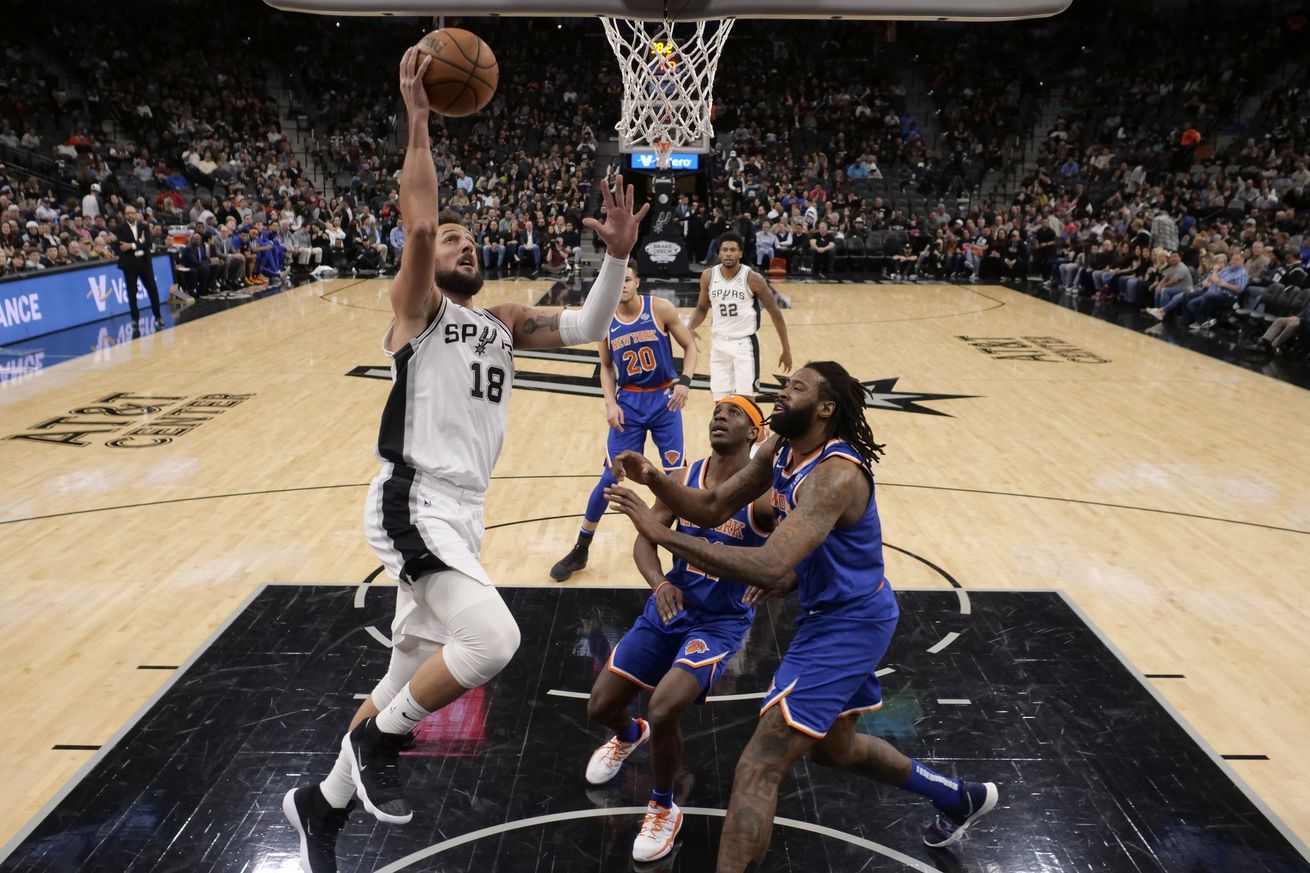 San Antonio made it seven straight, avenging a blowout loss at MSG that came three long weeks ago.

Jakob Poeltl’s face was red. Not red as in embarrassed, mind you, or even flushed from having just played 27 minutes of his typically frenetic brand of rim-to-rim basketball. Instead the 7-foot Austrian had the distinct rouge and Ray Ban silhouette that might afflict a recent transplant after spending their last two Marches north of the border. The “glow” — as Patty Mills had called it — made him stand out that much more while on the floor during the Spurs’ 109-83 win over the New York Knicks.

“I got a little bit of sun,” he said, explaining himself earlier in the day. “A little too much sun.”

Poeltl appears to be settling in just fine in San Antonio, even if the South Texas rays happened to catch him off guard this once. The 23-year-old center brought ample protection to the Spurs’ paint on Friday, collecting a season-high 5 blocks to go with 9 rebounds and 2 steals, putting up a 72.7 defensive rating on the night. Also impressive: he did so while only picking up 1 foul, a feat in itself considering his high foul rate through his first two NBA seasons.

Poeltl rounded out his stat line with strong play on the offensive end, adding 12 points on 6-of-7 shooting, 2 assists, and seemingly a dozen screens that sprung Spurs shooters free for made baskets around the perimeter. It’s no coincidence that his recent ascension to the starting lineup, which occurred immediately following the team’s last loss versus this same Knicks team, has coincided with the Spurs’ current 7-game winning streak.

After the game, Gregg Popovich had plenty to say about his young center:

“Jakob was really impressive tonight. He’s been impressive the whole year, being a young guy and learning the system, learning his teammates, where to be on the court, what his role is, all that sort of stuff. It’s been a steady improvement the entire year, and now that he’s been starting these games in a row, he’s starting to feel real comfortable and really helping us on the defensive end of the court.”

It’s been a season of adjustments in San Antonio — for Pop, Poeltl and every other major roster piece. Longtime Raptor DeMar DeRozan is adapting to a new team alongside his former teammate; Bryn Forbes and Derrick White have both thrived as full-time starters for the first time of their careers; Aldridge has transitioned between small-ball 5 to bully-ball 4 (“That is home,” he said of his return to playing power forward. “It feels great. It is like walking in the house and getting mom’s cooking. It just feels right.”) while learning to coexist with another high-volume scorer and new ball-handlers getting the ball to him in his conditioned spots. It’s all a process and, just as we saw in New York just three weeks ago, you’re prone to get burned along the way.

As such, it’s not hard to convince yourself of the legitimacy of this recent turnaround, one that has the retooled Spurs 11 games over .500 for the first time this season, riding the NBA’s largest active winning streak, and with a tenuous grip on the 6 seed. The defense has looked settled, and it’s come at no expense to one of the league’s more consistent offenses. Sometimes it just takes a little longer for things to come together and for a team to discover that spark.

But perspective works both ways. You see a child filing out of the AT&T Center after a win wearing his own DeMar DeRozan jersey and it makes the DeRozan Spurs era suddenly feel generational in a sense, the sole version of this team he’s ever known, only for a handful of still-serviceable Kawhi Leonard jerseys to remind you how quickly that halcyon glow can fade.

Either way, the Spurs don’t have to wait long for a tougher test than the cellar-dwelling Knicks. Matchups against the Blazers (a Saturday SEGABABA) and the Warriors (on Monday) should provide more compelling benchmarks for where this team stands as the playoffs approach. In the very least, they can help the Spurs make sure they don’t see the latter opponent, currently sitting at the one seed, for a third straight postseason.

Keeping legs fresh for the SEGABABA

Building a big lead allowed Pop to dig deep into his rotation and play no starter more than 27 minutes. “We played a lot of people, which is unfortunate because we have a real tough game tomorrow,” he said afterwards. The 27 and 26 minutes for Aldridge and DeRozan, respectively, are among their lowest minute totals of the season.

He didn’t attempt any on Friday, but Aldridge came into the night having attempted 6 three-pointers over his past 4 games, a large uptick for a guy who has only taken 31 total on the season. I asked Pop about it pregame, and the Spurs coach confirmed that would be a point of emphasis after the recent move to playing two traditional bigs together again:

“With Jakob getting more and more minutes, [LaMarcus] has kind of matriculated out to the perimeter a little bit more.”

After missing a couple of games with the flu, Rudy Gay was back in uniform on Friday. The Spurs forward looked noticeably leaner and told the Express-News’ Tom Orsborn he lost 10 pounds while battling the illness. He had 12 points, 4 assists and 3 boards in 19 minutes of action.

If it feels like Poeltl’s impact extends beyond what you see in the box score, one reason is what he does as a screener for his floor-spacing teammates. Since joining the starting lineup, the center has averaged 12 points off screen assists, the 6th highest mark in the NBA over that stretch.