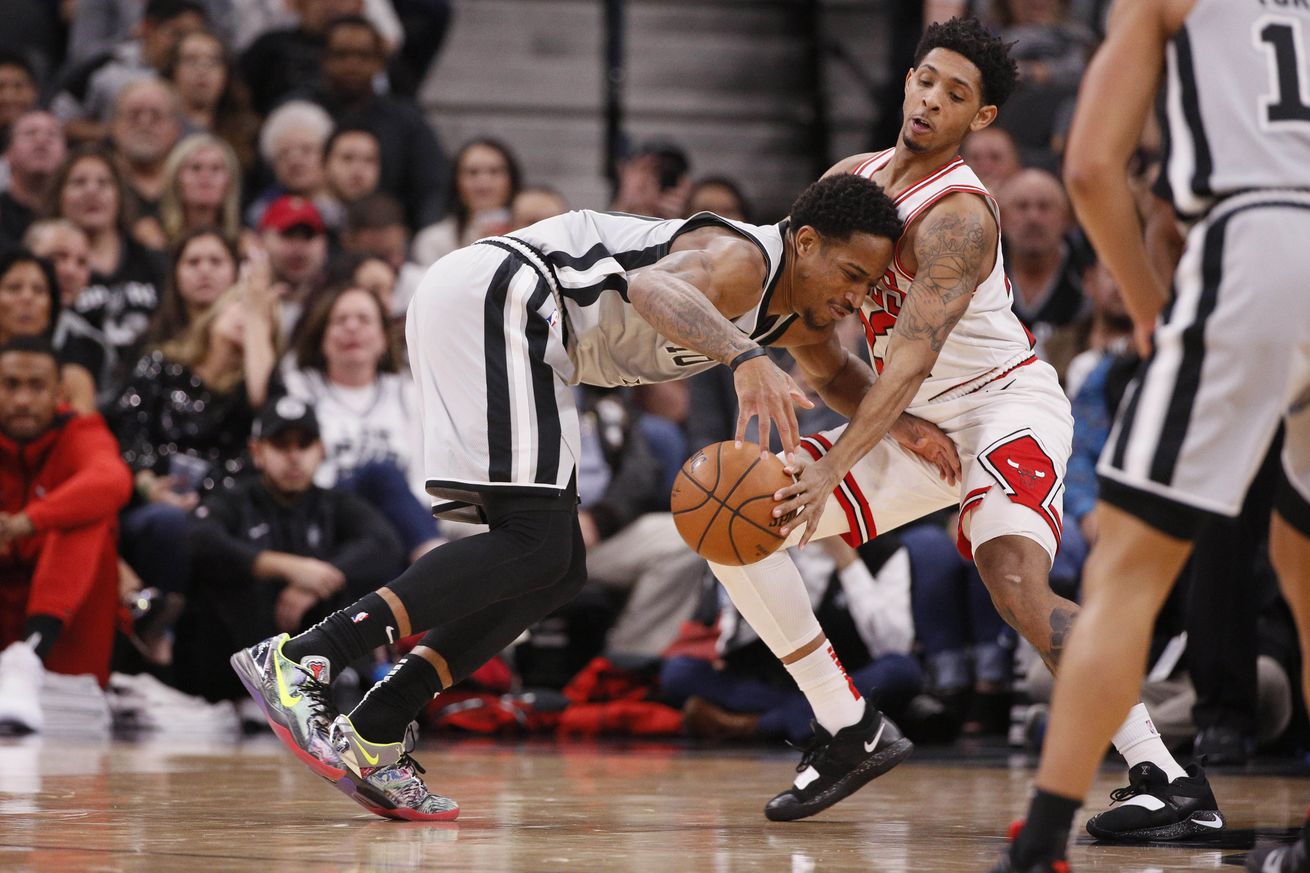 After showing progress in their previous four games, the Spurs regressed at the wrong time and lost to another bad team.

Gregg Popovich called a timeout down three with eight seconds to go to draw a play to get Bryn Forbes open. Bryn got the ball, pulled up in a hurry and airballed the would-be tying bucket. In that exact moment, dozens of articles about the Spurs turning the corner were deleted.

This is a bad loss. There’s no other way to put it. The cellar-dwelling, mutiny-attempting, leadership committee-forming Bulls managed to come back from a 21-point deficit to beat the Spurs 98-93 in San Antonio. That’s bad enough on its own, but the way it went down was so uncomfortably familiar: One of the stars was bad, Pop’s rotations were questionable, the guard play was a disaster, the perimeter defense was permeable. It was all eerily reminiscent of how the Spurs were losing before their recent four-game winning streak, and particularly of other losses to bad teams like the Suns and Heat. The Spurs simply can’t seem to shake the bad habits that get them in trouble against the league’s worst teams.

The first half was so encouraging that it made the last two quarters so much harder to bear. In the first 24 minutes the ball moved. LaMarcus Aldridge was destroying anyone Chicago put in front of him but no one was really forcing things on offense, instead taking what the the Bulls eventually surrendered when forced to make quick decisions. The defense was solid, with the second unit in particular doing a fantastic job of masking as a team some glaring individual weaknesses. It was fun to watch the Spurs toy with a bad Chicago team, but not unexpected after the previous four wins. Unfortunately as soon as the second half started, the team regressed to its worst version, causing yet another embarrassing loss.

After playing smart offense in the first half, a few early turnovers caused the Spurs to default to their iso-heavy, post-oriented, star-driven attack even though they clearly didn’t need one-on-one heroics to score on the Bulls. It was painful to watch the ball stop as everyone stood still for 15 seconds while Aldridge tried to establish post position or DeRozan tried to get himself to the line by making wild drives to the bucket. On the other end the individual weaknesses that were hidden earlier were exposed by a Bulls team that, having no better option, went at the Spurs lesser defenders one-on-one. Pop didn’t help matters by experimenting with lineups instead of giving more minutes to proven units.

The Bulls are so bad on offense that they just scored 55 points in the last two quarters despite all those issues. That was enough to complete the comeback, because the Spurs only managed to drop 31 in that stretch after getting 34 in the second quarter alone. It might have been the worst half of the season in which there have been several to choose from.

This loss doesn’t erase the four wins that came before it or the real progress the Spurs have showed in some areas during this homestand. They are getting better. They are just doing it more slowly than those of us hoping for a huge turnaround were expecting. There’s clearly still a lot of work to be done before any matchup can be penciled in as a W.

For now, the hope is that this loss will teach them the lesson others couldn’t: they need to take every opponent seriously for the full 48 minutes or risk embarrassment.

The Sixers will visit San Antonio on Monday. It’s the last game of the Spurs’ six-game homestand and it would be great to end it with a win.