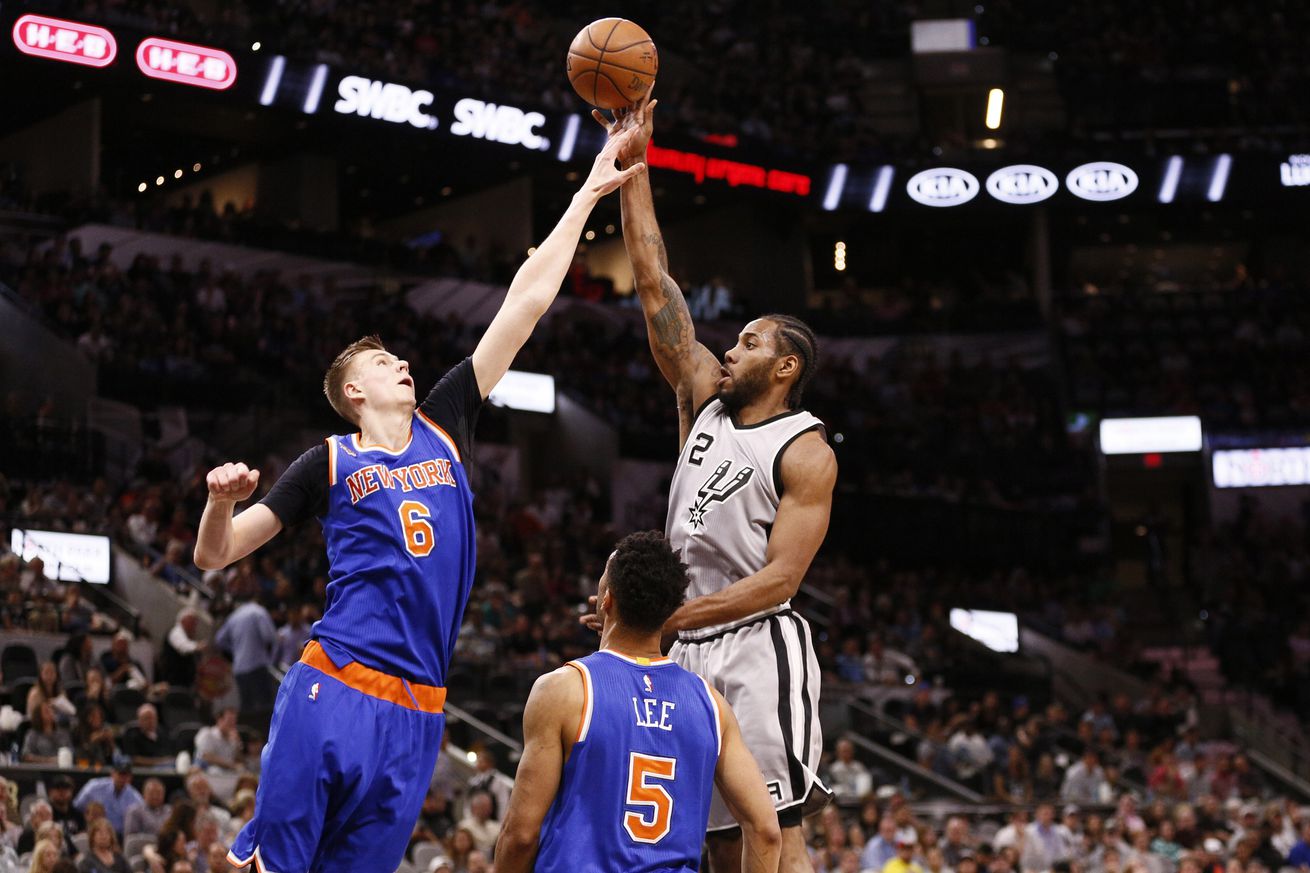 The Spurs have now beaten every team in the league this season.

With the Spurs looking to tighten up their game as the postseason gets close, the lottery-bound Knicks are moving in the opposite direction. It was a game that shouldn’t have been close, and wouldn’t have been if not for a poor third quarter from San Antonio.

Danny Green got the night off to rest up and Jonathon Simmons got his fourth start of the season. Dewaryne Dedmon continued to start at center for the squad and everything worked for the Spurs in the first quarter as they took a 33-23 lead after one. Derrick Rose, Kristaps Porzingis and Courtney Lee were joined by Willy Hernangomez (14th start) and Mindaugas Kuzminskas (5th start) for the Knicks.

Two thirds of San Antonio’s shots found the bottom of the net in the opening quarter with 10 of their 14 buckets coming with an assist. LaMarcus Aldridge had it going early, knocking down four of his seven attempts for nine points. Kawhi Leonard also chipped in nine points for SA on four shots. It felt like the Spurs would put this one away quickly and that feling continued during the second quarter.

It got worse for New York as they were held to just five points over the first six minutes of the second quarter and found themselves in a 46-28 hole. Of course, the Knicks aren’t exactly trying to win games at this point in the season, incentivized as thy are to lose games for more ping pong balls in the lottery. Check out what might be the easiest bucket of Kyle Anderson’s career. h/t Knicks defense

At the half the Spurs led 61-43. Pau Gasol got into a groove in the second quarter and had 12 points at the half. Kawhi dropped another nine in and Pau added seven.

The Knicks started the second half without Kristaps Porzingis, sitting with four fouls in 10 minutes in the first half. The Knicks managed to cut the lead to single digits with about four minutes left to play in the third quarter as the Spurs struggled to put points on the board for a stretch. San Antonio’s energy level was noticeably lower than during the first half, understandable, if not desirable after a dominant first half.

By the end of the quarter the Knicks had managed to cut the Spurs’ lead to four going into the final period, not ideal with a busy stretch of schedule and rest needed for SA’s heavy lifters. The Spurs missed 16 of their 27 shots in the third quarter. New York dropped a whopping 31 on SA, led by 13 from Hernangomez and 10 from Derrick Rose.

Luckily for the home team Patty Mills found his shot in the fourth, dropping eight in the first six minutes to give SA some breathing room. After the game Popovich noted that the biggest thing that Mills gave the team was pace.

With the Spurs up five with seven minutes left to play, Patty hit back-to-back triples. That was followed by a three from Kawhi, with the helper coming from Patty, with just under six to play put the Spurs back up 12.

That was enough for the Spurs, who kept at least an eight-point advantage for the remainder of the game.

It wasn’t a pretty win – the Spurs were outscored 55-45 in the second half – but the home team did enough in the first half and down the stretch to pick up their fourth win in a row.

Your Spurs improve to 56-16 for the season, remain two games back of the Warriors and solidly in the two-seed.

The Spurs have two games left on their homestand and will play both conference leaders with the Cavaliers visiting SA on Monday and the Warriors coming to town on Wednesday. That should be fun.