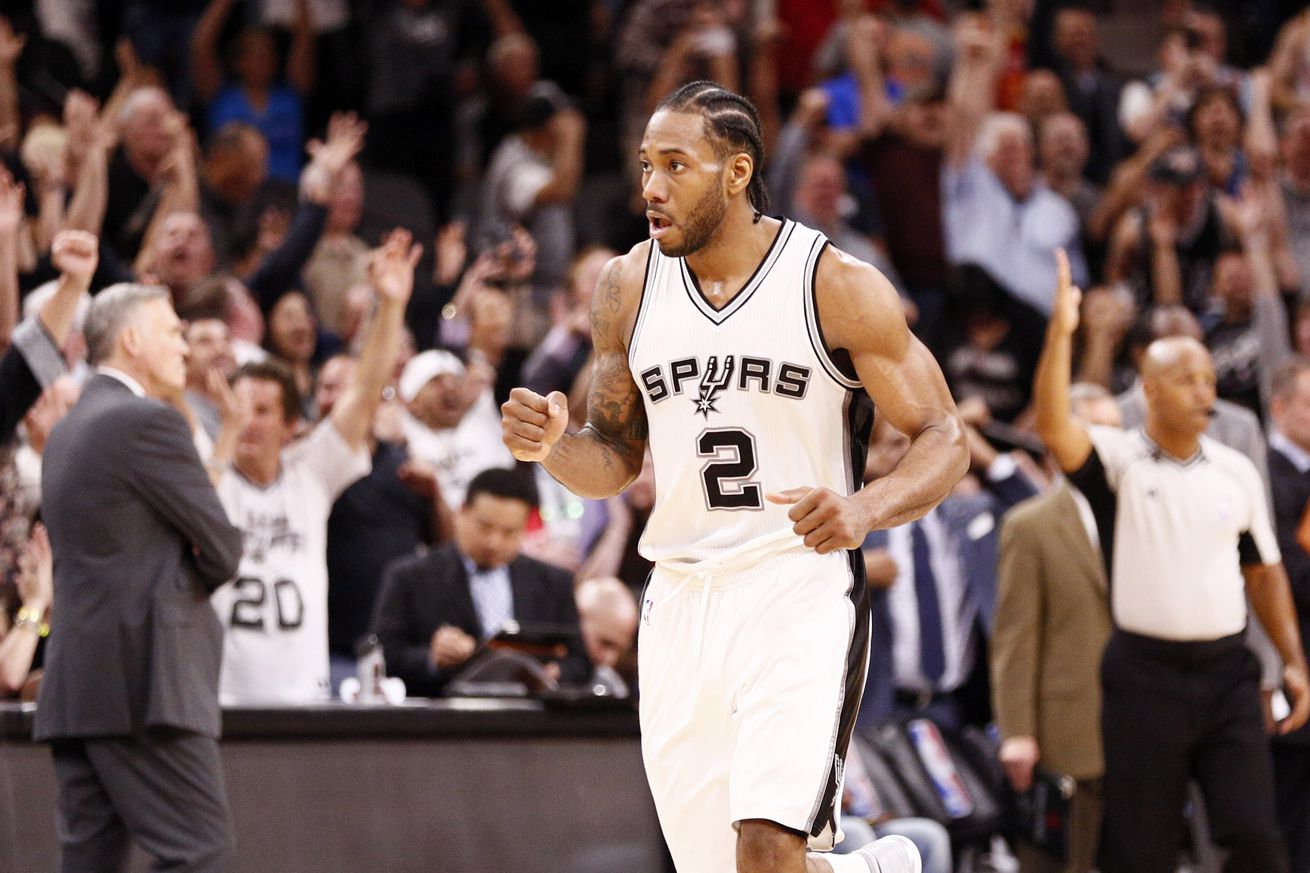 Kawhi Leonard strengthened his case for MVP behind an incredible crunch time performance and his fourth-straight 30-point game.

What a game at the AT&T Center on a Monday night!

Fresh off of being named Western Conference Player of the Week for the second time in five weeks, Kawhi Leonard dropped 39 points, with 15 coming in the last five minutes of the contest. He led the Spurs to their eighth straight victory and with the win the Spurs won the season-series with their I-10 rivals, 3-1.

It was Whi’s fourth-straight 30-point game and his 23rd of the season (the most for a Spur since Timmy did it back in the early 2000s). And the Spurs have needed all of his scoring as the team secured a one-point win over the Pacers, overtime wins over the Pelicans and Timberwolves and a two-point win over the Rockets over that stretch.

On March 2nd sportsbooks had Kawhi at up to 20/1 to win the MVP award. After his performance against the Rockets it’s down to around 6/1. And it should be, the Spurs have a great chance to grab the one-seed and if they do, what Kawhi is doing warrants a serious look at the award for the 25-year old.

Leonard is the only player in the league in the top-15 in offensive rating, defensive rating and usage rate. h/t Jordan Howenstine

Any talk of Kawhi being a system player or even being called a two-way player at this point is silly. He’s the seventh leading scorer in the league, arguably the best defender in the game, the clear leader and best-player-by-a-mile of a 65-win paced team and he’s undoubtedly a stone-cold killer.

After the game Gregg Popovich was asked about Kawhi and the MVP award. His reference to Kawhi’s ultra-clutch block of a James Harden layup in the final minute of a two-point game speaks to what makes Kawhi so valuable to his squad.

The block was probably the play of the game but Kawhi also scored 35% of the Spurs’ points in the game and only LaMarcus Aldridge and Tony Parker also reached double figures for the Silver and Black. Making an overstatement to just how much he means to the Spurs at this point seems impossible. The MVP chants that the AT&T Center rains down on Leonard at the free-throw line really have real substance at this point – it’s undeniable that he’s having an MVP worthy season.

On to the game that was played.

It was a shaky start for the Spurs as the Rockets doubled up the Spurs early at 14-7 about five minutes into the first quarter behind outstanding offensive play from James Harden, who tallied four assists in that time. Then Harden started dropping threes on the Spurs and the Rockets built a 33-18 lead after a Ryan Anderson deep ball. By the end of the third Houston had scored 39 points on the league’s best defense (hitting 70% of their shots) and held SA to just 23.

Harden was phenomenal, scoring 18, including three threes and he added six assists to zero turnovers.

But Harden has to rest some and the Spurs took advantage of his time on the bench and started the second quarter on a 7-0 run, including a three from Pau Gasol. The second quarter went better for the Spurs and they held the Rockets to 15 points on 6-22 from the field.

At the half San Antonio had cut their deficit to seven, 54-47.

Unfortunately for the home team the third quarter started off more like first than the second and five minutes into the period Pop called a timeout with his team down 13, 69-56. After a less than stellar second quarter (five points, one assist, three turnovers) James Harden was back to looking like an MVP, dropping seven points, dishing three dimes and not turning it over in that stretch of play.

But back-to-back-to-back triples from Danny Green and Tony Parker (2) cut the deficit down for four. A couple of Rockets turnovers and a dunk from David Lee made it a one-possession game at 69-67 with five and a half minutes left in the quarter.

Tony Parker then tied the game up a couple of possessions later with a nice spin move.

A little vintage Tony Parker to tie the game against the Rockets. #GoSpursGo pic.twitter.com/Ir8LwvgJC2

David Lee followed that with a dunk to give the Spurs their first lead of the night.

David lee for the lead! pic.twitter.com/LBpLqMHZ2J

The rest of the third was a close contest and a tough whistle against Kawhi Leonard (incensing the AT&T Center) on a prayer of a shot from James Harden put the Rockets up three but the call was evened up as Harden was whistled for a questionable foul on the next play after playing very good defense against Kawhi Leonard. The Spurs went into the final period down one, 82-81.

The Rockets built a 96-89 lead with seven minutes left to play on a 7-0 run before Kawhi started to take the game over, first scoring on a baseline jumper. Then in the final five minutes he made a three, five free throws, a banker, another triple and another pair of threes. It was an incredible performance. I’ll just drop this right here.

Here’s the block that was so crucial to the Spurs’ victory in this one.

The Spurs will stay at home to host the Sacramento Kings on Wednesday night. The Spurs are 2-0 this season against Sacramento and with Boogie going to the Pelicans the Kings have little to play for. I’d be fairly surprised if Pop didn’t elect to get a few guys some rest for that one with a game against the Thunder in OKC on a SEGABABA on Thursday night. Honestly, I’d be surprised if a few guys didn’t rest in each of those games with the Warriors visiting the AT&T Center on Saturday night in what should be the game of the week, at least on paper, with the Spurs now clearly hunting the one-seed.