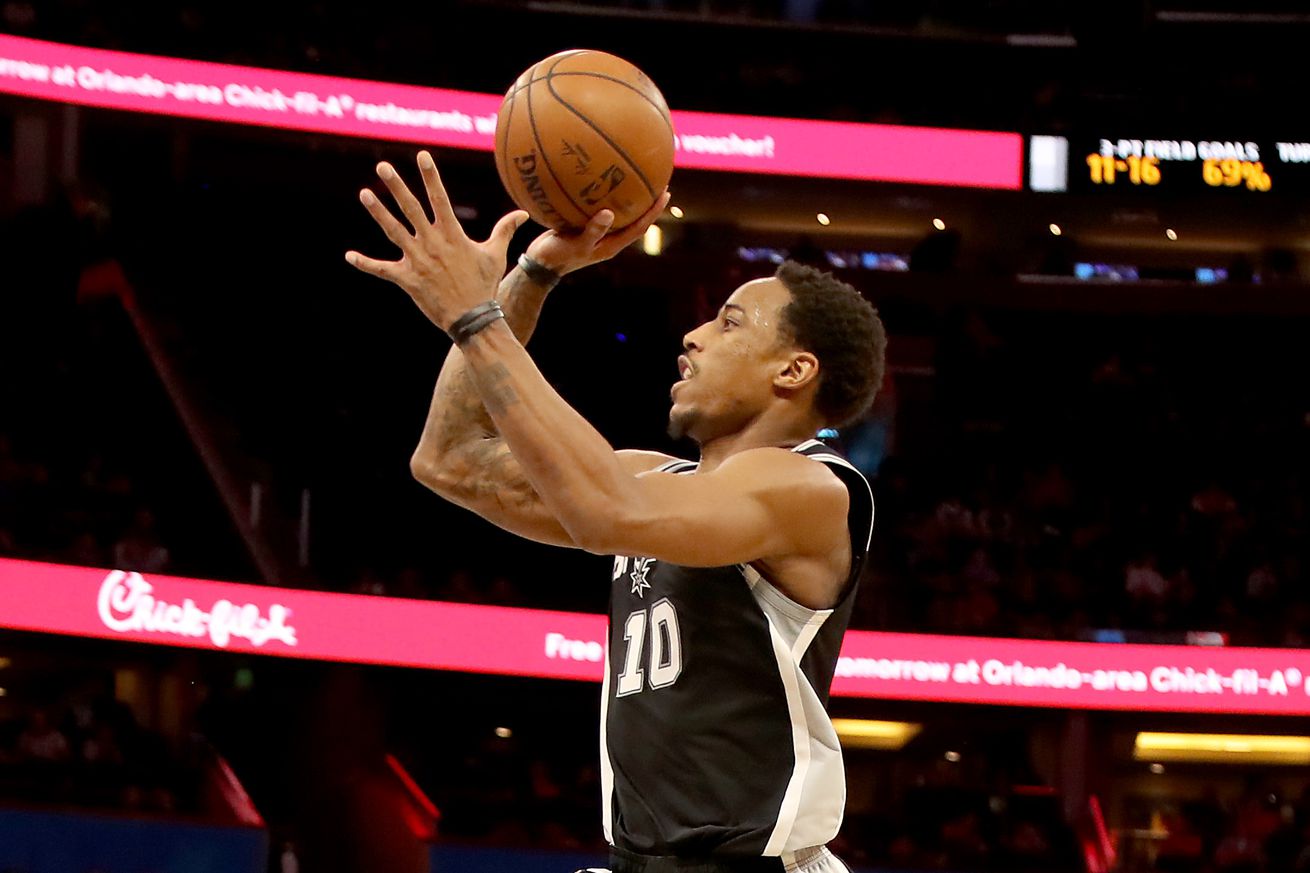 With the Houston Rockets losing to the Golden State Warriors on Wednesday night, the Spurs now have the longest winning streak in the NBA at six games. The Spurs retain the 6th seed in the Western Conference after Wednesday’s games, but there was movement by other teams.

Russell Westbrook avoided suspension after his altercation with a Utah Jazz fan on Monday night. Westbrook responded by scoring 31 points (on 52% shooting), collecting 12 rebounds, and dishing 11 assists in OKC’s win over the Nets. They needed every bit of that, as the Thunder found themselves down by as many as 17 points midway through the second quarter. The Thunder were up by just two points to start the 4th quarter, but an early 14-0 run put the Nets away for good.

The Rockets had won their first three matchups against the Warriors this season, so the Warriors were playing to avoid the season sweep on Wednesday night. The Warriors did so without Kevin Durant, who sat out with an ankle injury. The Rockets trailed the majority of the game, but they did manage to make it tight at the end despite being down by 14 points early in the 4th quarter.

The NBA is strange. The Rockets beat the Warriors one game earlier in the season without James Harden and another game without Chris Paul. Wednesday night the Warriors were able to beat the Rockets without Kevin Durant. Teams need to be healthy during the playoffs, but it goes to show that any team can win a single game on any given night.

The Utah Jazz have not been playing well lately, and they were only up by three points against the Phoenix Suns after three quarters. A 36-22 4th quarter gave the Jazz a win they desperately needed.

Assuming the Spurs are unable to make it to the top half of the standings by season’s end, the current positioning is exactly where I’d like the top teams to end up. If Portland is able to overtake the Rockets for 4th, even better, but I want the Rockets to end up in the 4th or 5th seed. Right now the Spurs would play the Thunder in the first round of the playoffs. I’m not as scared of the Thunder as others out there, so I would welcome that series. I still think the Denver Nuggets is the ideal matchup, but I would list the Thunder as my second-most desired first round matchup.

After Wednesday’s win over the Suns, the Jazz overtook the Los Angeles Clippers for 7th in the West. Right now the Jazz are ahead of the Clippers because of percentage points, but they also own the tiebreaker against the Clippers because they won the head-to-head matchup. They also own the tiebreaker against the Spurs, so that puts them in good position to overtake both teams by season’s end if they take full advantage of their weak schedule.

Right now the Spurs have the 11th best record in the NBA, which would result in them having the 20th pick in the 2019 NBA draft. The Spurs are also very likely to end up with the Toronto Raptors’ first round pick, which right now would be the 29th overall pick. With the Warriors defeating the Rockets on Wednesday, they moved to within 1.5 games of overtaking the Raptors for the 2nd best record in the NBA. If the Warriors were to overtake the Raptors, the Raptors’ draft pick would move from 29th to 28th.

After overtaking the Clippers on Wednesday night, the Jazz can overtake the Spurs on Thursday by defeating the Timberwolves. I know I should be careful what I wish for, but I wouldn’t be too upset by this outcome. The Spurs’ draft pick would drop to 19th and they would be in position to play the Nuggets in the 1st round of the playoffs.

I’m hoping the Thunder win, as that would give them a half game lead over the Rockets for the 3rd spot in the West. If the Kings lose in Boston tonight, I may remove them from the Spurs watch articles until proven otherwise.