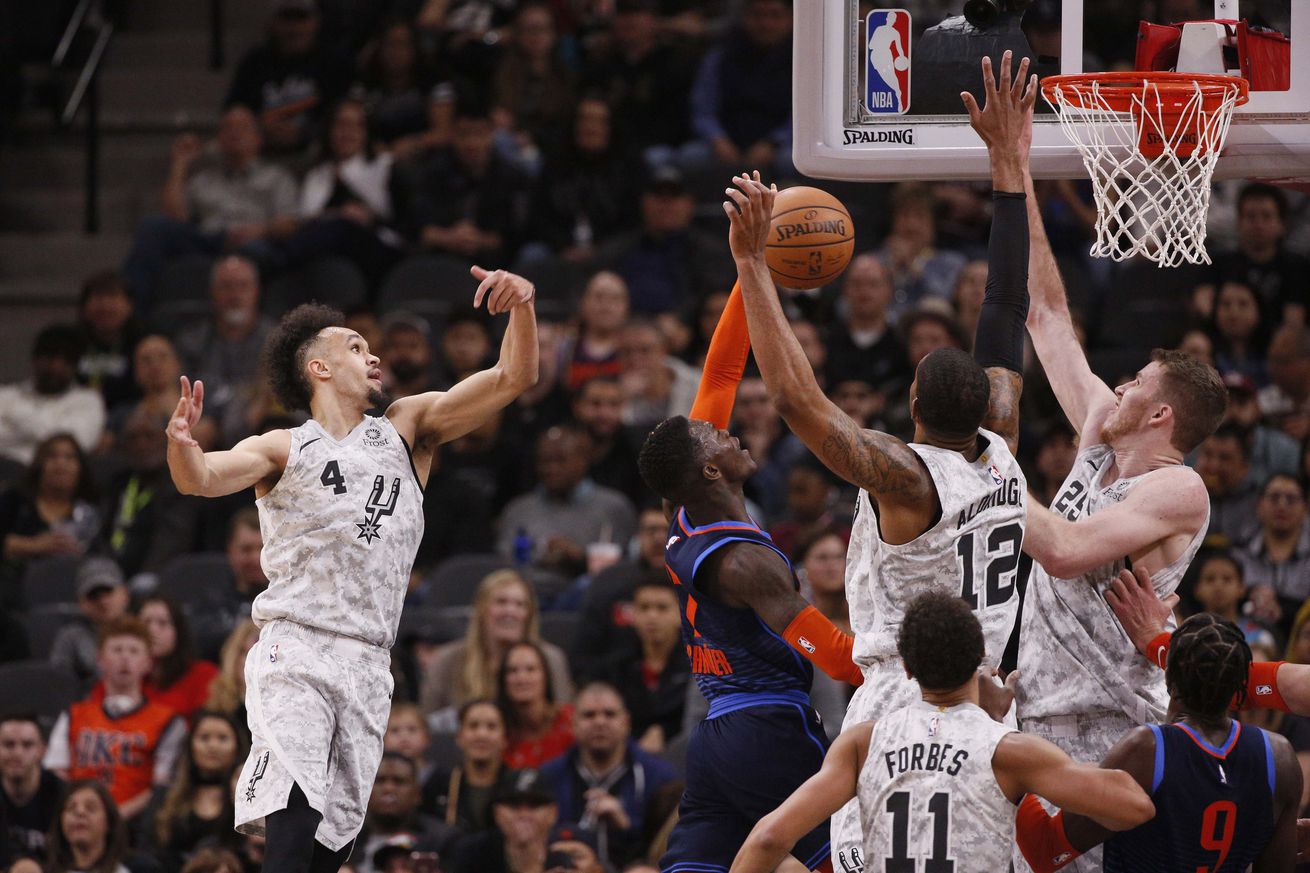 Spurs turn up the defense late and easily outpace the Thunder to win their second straight home game.

The Spurs showed that they’re a formidable team on their home court as they won their second game in a row in San Antonio after going 1-7 on the road on their annual Rodeo Road Trip. The Thunder were missing their MVP candidate Paul George, and Russell Westbrook wasn’t able to overcome the solid play of the Spurs big four as Derrick White, LaMarcus Aldridge, DeMar DeRozan and Rudy Gay all made significant contributions.

The scoring opened with a Derrick White layup in traffic, high off the glass. LaMarcus Aldridge didn’t have anyone defending him who had any chance of slowing him down, and he took advantage as the Spurs rushed out to 21-7 lead halfway through the quarter. Jerami Grant kept the Thunder in the game with his athletic play, but Rudy Gay’s pretty dunk as the shot clock was going down put the Spurs up 38-25 after one quarter.

The second quarter saw a little sag by the Silver and Black as Raymond Felton gave a boost to the OKC bench unit with 9 quick points as they brought the Thunder deficit down to 4 halfway through the quarter. The Spurs regained a bit of composure late, as the Thunder lost theirs, with Russell Westbrook narrowly missing out on picking his second technical foul as somehow it got assigned to Billy Donovan at the last second. The Thunder scored the last points with a smart roll of the ball to half court before Westbrook picked up with 4 seconds left and drove it to the basket with only token resistance. Nevertheless, the Spurs led 72-63 at the half.

Dennis Schroder got the Thunder off to a quick start in the third quarter with a pair of buckets as the Spurs started off cold and the deficit was just five points. The Spurs regained some poise and pushed the lead to 13 late in the quarter. Perhaps because their ears were still smarting from Pop’s halftime rant, the Spurs turned up the defense late in the quarter, stopping the ball on the last Thunder possession of the quarter, and the Spurs led 92-78 after three quarters.

Lawler’s Law was invoked early in the fourth quarter as DeMar DeRozan banked a pretty turnaround banker into the basket to put the Silver and Black up 101-85. Meanwhile, the Latvian Laser was beginning to heat up as the Spurs played keep away from the Thunder. Russell Westbrook tried to do his part, getting quick scores for OKC as they tried to catch up, but the three point shooting for the Silver and Black was contagious as Bryn Forbes hit a deep dagger to put the Spurs up by 18 with four minutes left. Donovan waved the white flag by pulling Russell out of the lineup, and the deep bench finished up the game for both teams. Lonnie Walker IV finally got onto the court, but he didn’t have a huge impact as the Spurs won

I’m not a real doctor.

The Spurs are now 35-29 and are tied with the Clippers for the final playoff spot in the West. They will finish their three-game homestand on Monday night against the Denver Nuggets. The Nuggets have been near the top of the Western Conference standings all season, and it will be tough for the Spurs to grind out another win, but they need every one they can get to stay in the playoff picture.