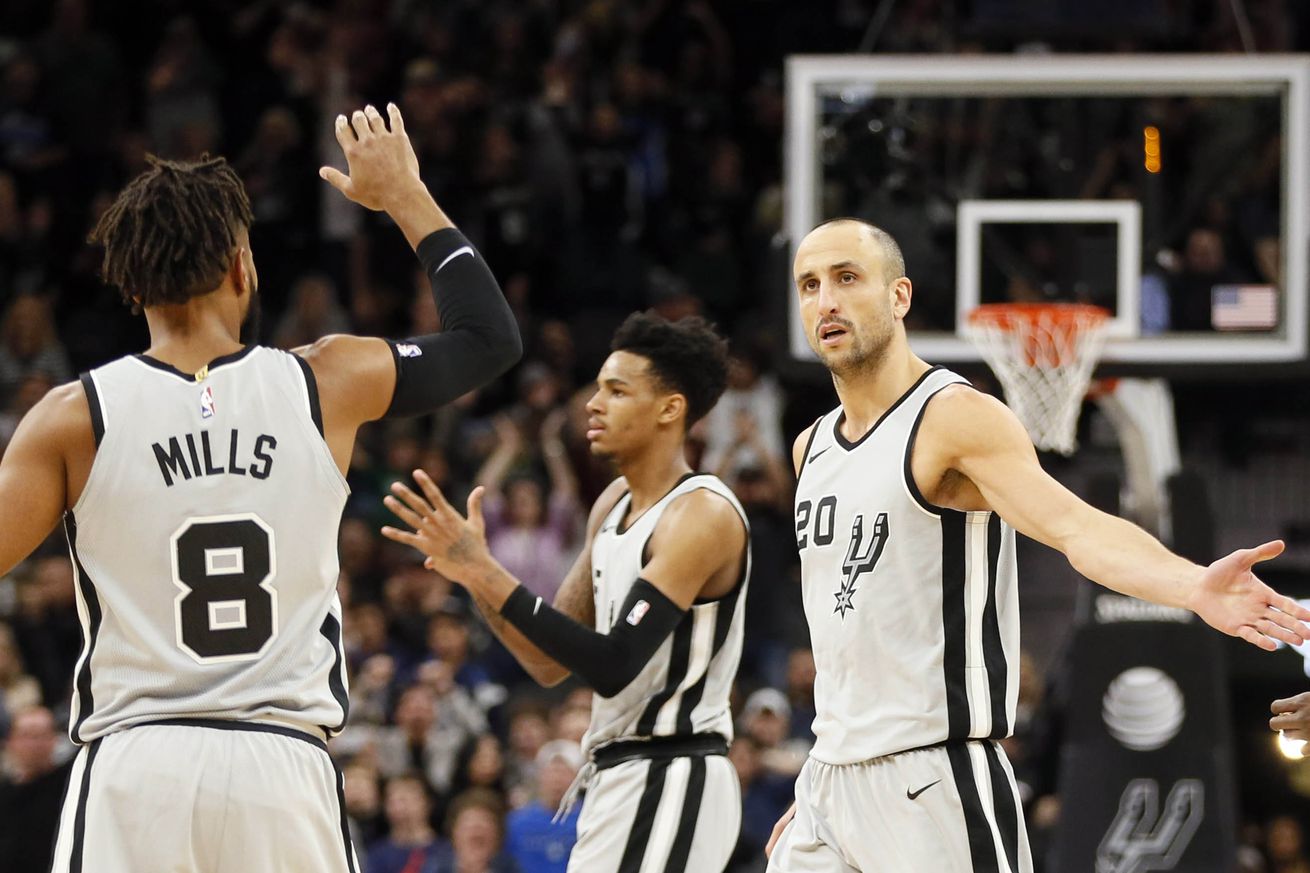 It wasn’t always pretty, but the Spurs pulled off another thriller thanks to some dominant play by LaMarcus Aldridge, contributions from Davis Bertans and Dejounte Murray, and, of course, more heroics from Manu Ginobili.

In a season full of twists and turns, enigmatic injuries and head-scratching performances, it’s grown increasingly clear that there may be nothing more reliable in San Antonio than Manu Ginobili in the clutch.

A week after dealing the coup de grace to the Boston Celtics, it was the 40-year-old once again delivering down the stretch in the Spurs’ heart-in-your-throat, come-from-behind win over the Mavericks on Saturday — first with his defense on Wes Matthews’ attempt to inbound the ball, then with his drive to the basket which gave the Spurs their first lead of the game, 98-96, with just three seconds to go.

The basket capped a 13-0 run over the last four minutes of a game that seemed all but lost. In fact, Inpredictable gave the Spurs a 3.7% chance of winning with 4:11 left in the fourth quarter.

The numbers affirm how incredible Ginobili’s been when the game has mattered most. He’s tied with LaMarcus Aldridge for the highest plus/minus in “clutch” situations (+34), to go with an 84.3 True Shooting %. It’s no surprise that Pop inserted him into the game with just over a minute to go to help usher in the victory.

While it was the veteran who put the finishing touches, the Spurs’ 13-0 run was sparked by their youngest player, Dejounte Murray, who got the start with Tony Parker out. Even by his standards, Murray was a rollercoaster of highs and lows on Saturday, picking up all four of his fouls in the first half (including one on a four-point play) while also shining in the open floor multiple times.

And with San Antonio down double digits late in the final quarter, it was Murray (who Pop called “fearless” after the game) who scored four straight points to cut the lead to seven. On the next possession, he showed his inexperience by turning the ball over trying to force his dribble into a crowd; mere moments later, he looked like a wily vet getting the ball in transition and patiently seeking out Bryn Forbes for the corner three.

But you don’t go down double digits at home to an 8-22 team without there being some negative trends. Ginobili and his teammates know they shouldn’t require that kind of last-ditch effort to squeak by a mediocre (albeit disciplined) Dallas team. They also know they were lucky to come away with the win:

“Very slow start,” said Ginobili. “Very poor defensive performance that, fighting through it, got us back into the game… We are not getting that consistency yet, and hopefully we get it back soon, because we are not going to go that far playing only one half.”

Blame injuries — Kawhi Leonard (rest), Parker (rest), Danny Green (groin) and Kyle Anderson (MCL) all sat — or the lack of familiarity between the lineups Pop has had to cobble together, but the Spurs lacked their trademark polish on the defensive end. That showed in their pick-and-roll recovery on Dirk Nowitzki and Maxi Kleber, as well as in their rotations whenever J.J. Barea or Yogi Ferrell was able to take his man off the dribble. For a team that hangs its hat on defense, these are concerns, but they’re understandable given the personnel Pop is working with.

That fluidity and unfamiliarity have made it all the more necessary to lean on Ginobili during a somewhat-tumultuous start to this season, with Pop routinely asking him to come through in end-game situations. By now, it’s far more shocking when he doesn’t.

“Whenever he gets the chance he does that, so it definitely doesn’t surprise me,” Davis Bertans said after the game, echoing the same sentiment other players expressed after the Celtics win.

At some point, one’s actions transcend expectation and become a culturally rooted idea, taking on a meme-like quality. There’s no one this suits better than Ginobili, who’s long been the common Spurs fan’s spirit animal, a player who elicits such mirth that even the corniest of expressions can work as a stirring synopsis of what he’s done.

And so it was that, when trying to sum up his veteran teammate’s brilliance in crunch time, a 21-year-old Murray said, with a smile, “Manu gonna Manu.”

It’s the type of quote that might make you cringe, if you could only stop smiling.

As has often been the case, the Spurs don’t get this win without Aldridge, who made up for a quiet night from Pau Gasol (0-for-4 shooting, 0 points in 15 minutes) and produced on both ends of the floor.

Meanwhile, LaMarcus (22 and 14) continues to be a rock on both ends of the floor.

He sniffed out this baseline out of bounds play and perfectly timed his block. pic.twitter.com/0qhxGic9ZJ

Aldridge scored four straight points to tie the game up at 96, and a big reason for Ginobili’s open lane to the basket on the game-winning basket was because the Mavs defense had to account for the big man setting the screen. Speaking of…

Ginobili, on not posting up with the game on the line

Ginobili made a great point following the win on the decision to go to a pick and roll (and not an Aldridge post-up) in the game’s final possession:

“I thought we were gonna post up LA, but I thought it was a good idea because, when you post someone up, it’s hard to control the clock. For a last play, it’s better to be facing the clock and know when you can attack. So I tried to use the most seconds possible, tried to take the last shot, and I just went hard.”

Another promising showing from Latvian KD

Davis Bertans (13 points, 7 rebounds, 2 assists) played an important part in the Spurs’ fourth-quarter comeback and had a game-high +17 plus-minus.

The best plus-minus of the night belonged to Davis Bertans (+17), who got to the rim, rebounded well, and hit both of his threes while operating as the screener. pic.twitter.com/MN9KuyiGGS

About these slow starts

One night after falling behind early to Houston, the Spurs, through a series of defensive miscues, gave up a 12-0 Mavs run in the first quarter as they fell behind 23-11. It was the largest run for either team, up until the very end of the game.

Pop, pre-game, on overcoming ‘off nights’

“I think, over time, one has to expect that somebody might have a bad night, playing poorly or maybe mentally just out of it. You don’t know what’s going on in everybody’s lives, but that’s why there’s other people to play. If somebody’s having a tough night, for whatever reason, hopefully somebody else can pick up that slack.”

It’s always an honor to receive a post-game shout-out from the GOAT: “I’m happy for them because they kept pounding the rock; they never gave in.” Coach, if you’re reading this (and of course you are), let’s grab a coffee sometime.