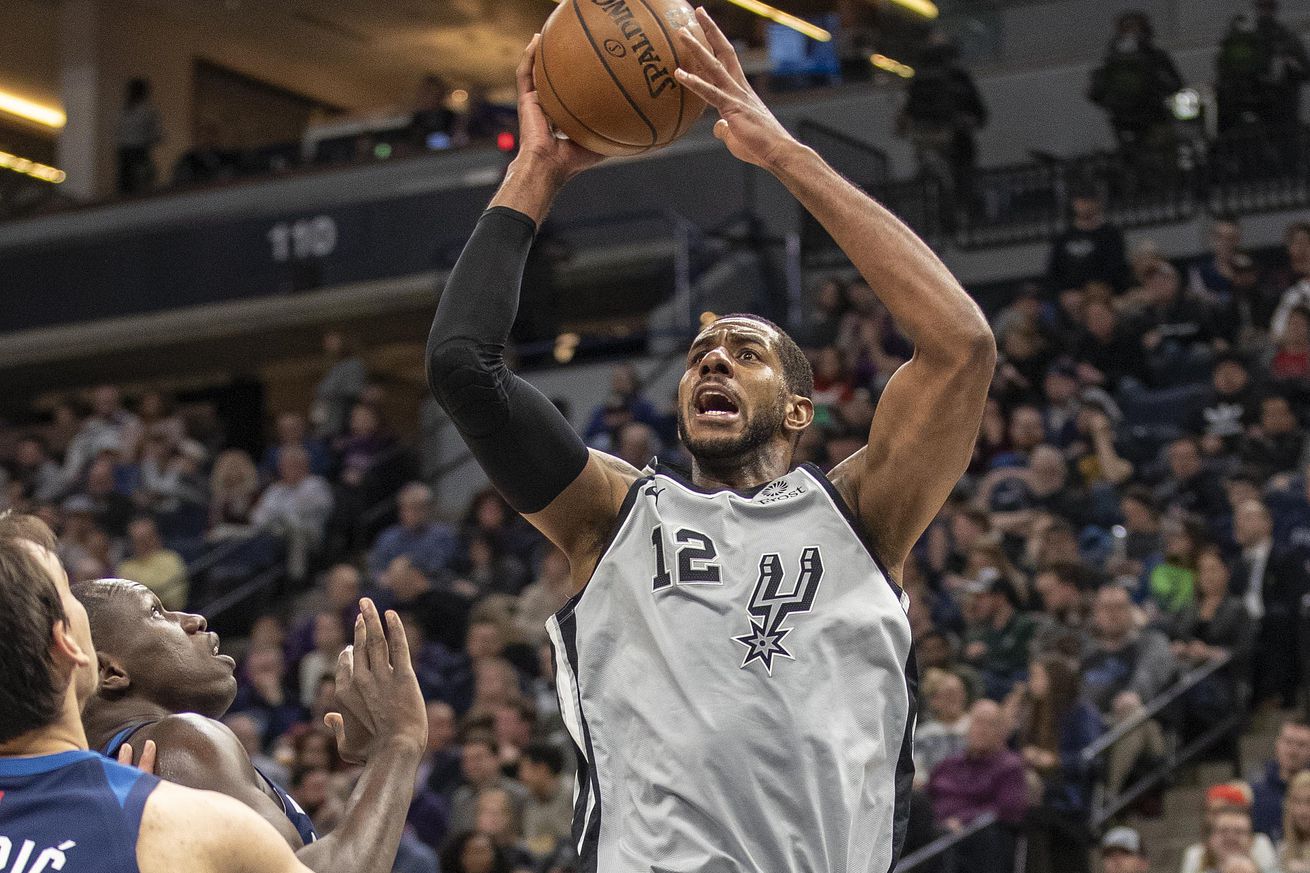 On a DeRozen-less night in Minnesota, the Spurs rose to the challenge and came out on top.

Another slow start should have doomed the Spurs to their 15th road loss of the season on Friday night against the Timberwolves. The late scratch of DeMar DeRozan left the team with a starting lineup of Derrick White, Bryn Forbes, Rudy Gay, LaMarcus Aldridge and Pau Gasol. That lineup hadn’t seen the floor for a single minute so far this season and it showed.

Fortunately, the Timberwolves didn’t exactly explode out of the gate either, with both squads starting off 1 of 5 from the floor. It didn’t get much better from there. Neither team was ever really able to put together any sustained stretches of good basketball, and though each had their runs, the game remained close and competitive throughout, with 27 lead changes and 17 ties. The Spurs’ offense looked stifled at times, clearly missing its best playmaker. Derrick did his best to fill in the gaping DeMar-sized hole, with 15 points on 8 shots, 6 rebounds, and 3 assists.

His two turnovers with less than 3 minutes to go in the game could have cost the team the game, but they likely wouldn’t have been in it in the first place without him. If anything, the Spurs needed him to be more assertive. Instead, it seemed that Derrick, LaMarcus and Rudy took turns keeping the team afloat.

They got help from some of the usual places, though, with Marco Belinelli and Davis Bertans each chipping in with three 3-pointers. Marco added 6 free throws, too, and hit a couple of difficult leaners (for normal folks, anyway) to get 19 points on the night. Some timely 3s from Davis, combined with an unexpected burst from Dante Cunningham helped the Spurs get back in the game late in the 3rd after briefly falling behind by double digits.

It may seem odd to focus on the offense in a game with a final score of 116-113, but scoring on both sides was buoyed by incessant trips to the free throw line. The two teams combined to make 55 of their 67 free throws. The fouls were especially easy to come by down low. LaMarcus, Rudy, Taj Gibson and Karl-Anthony Towns were called for 21 fouls on the night. Towns spent much of the game in foul trouble, playing only 21 minutes before fouling out with 2:27 to go in the 4th. Both teams had reason to be upset with the calls at times, and with a total of 53 fouls in this game, they were probably both right.

The Spurs, in particular, foul less often than any team in the league, averaging just 18.5 per game. Minnesota isn’t far behind, fouling just 20.2 times per contest, making the free throw parade in this game jarring on both sides.

The intensity ratcheted up significantly midway through the 4th quarter, and the Spurs initially took advantage. They stretched their lead all the way out to 7 with just 4 minutes to go before watching the Timberwolves claw their way back to cut it to 1 with less than a minute left. From there, Rudy took over.

His pull up jumper gave the Spurs a 3-point lead with 37 seconds to go, and after Derrick Rose cut it back to 1 and Marco missed a difficult runner, Rudy’s extra effort on the boards ended with the ball going out of bounds on Dario Saric. That gave the Spurs the ball back with just 5.8 seconds to go, effectively ending the game as long as they hit their free throws.

It wasn’t pretty, but an ugly win on a frozen January night in Minnesota counts just the same as any other W. The Spurs may still be in search of the casual dominance with which they steam-rolled team after team through much of the last 6 weeks, but winning a game like this without DeMar is a great sign.

Up next: Clippers on Sunday

The Spurs will travel back home for their 4th and final matchup of the season with the Clippers, who have lost 5 straight.