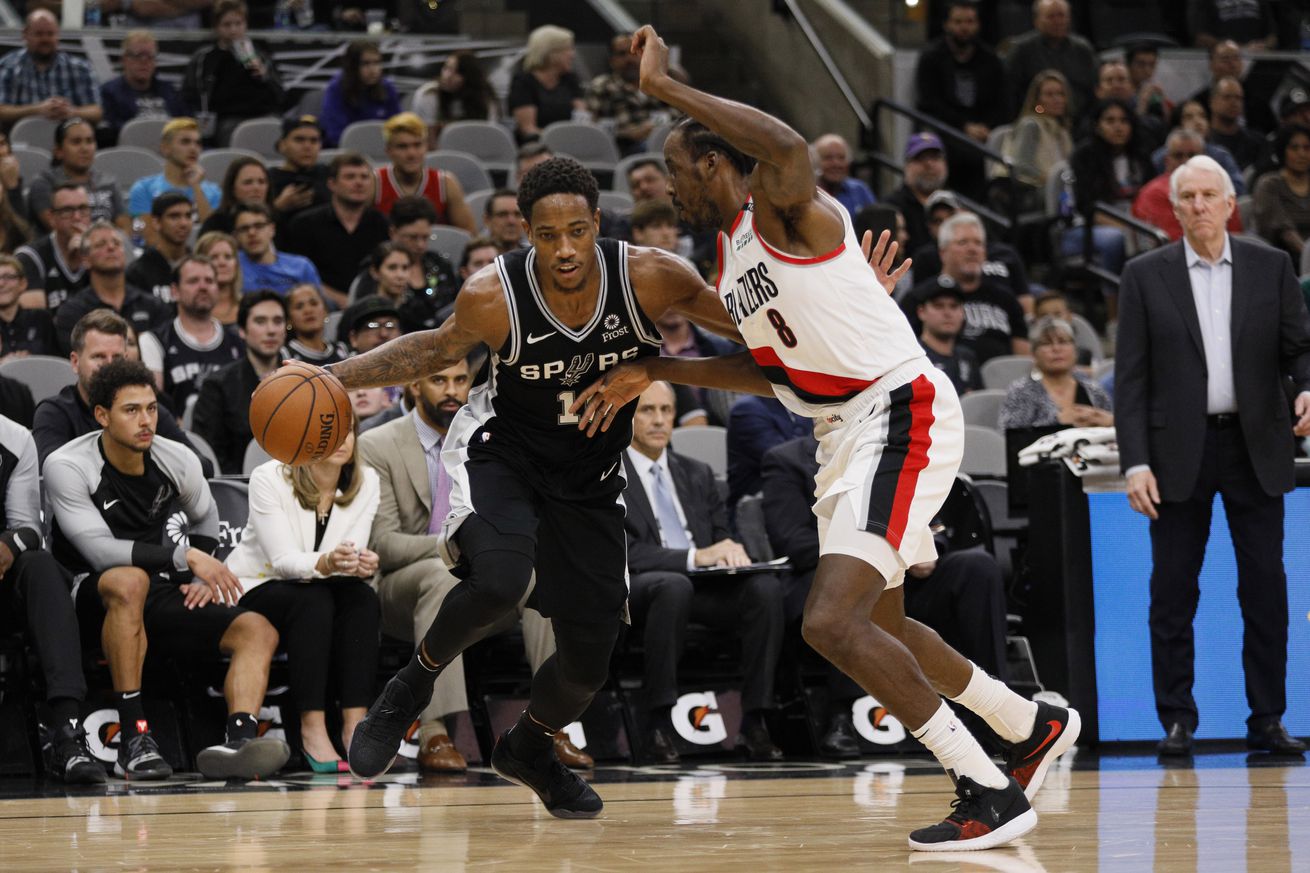 The Spurs doubled down on their maligned style of play, rode a season-high performance from DeMar DeRozan, and snapped their losing skid.

Back-to-back 30-point losses, a further slide below the .500 mark and roughly a thousand takes on the Spurs roster being untalented, the defense unsalvageable, Gregg Popovich too stylistically rigid and the franchise left behind in a brave new NBA. It was fair for doubt to creep in — and, to be honest, it still is.

After all, the 2018-19 Spurs are here to test your capacity to suspend disbelief, especially in how basketball games are meant to be won these days. The spiritual crucible continued in Sunday’s game versus the Portland Trail Blazers, with the team taking over three times as many non-paint twos (37) as three-pointers (a season-low 15), operating heavily out of the post, and looking to hang its hat on quaint ideals like defense and discipline.

Things looked better this time around: San Antonio was friskier on defense, white-hot on offense, and played a full four quarters of good basketball in beating Portland, 131-118.

As much as doubt is a part of life (and certainly sports fandom), it’s counterintuitive for the guys paid to put the ball in the hoop. That includes DeMar DeRozan, who had 3 turnovers and 10 points on 11 field goals with less than 5 minutes to go in the third quarter before dropping a cool 18 to close out the period, through a montage of post-up fadeaways and Eurostep finishes at the basket. That torrid stretch didn’t include a single attempt beyond the arc (he was 0-for-0 in the game), but it did feature two old-fashioned and-ones, a reminder that there’s more than one way to get three points on a possession. He finished the game with a season-high 36.

“Scorers shouldn’t have consciences; you just keep going. If you have a bad stretch you know the percentages are probably with you. He’s been around a long time and he’s very confident; he knows what he can do. That’s not gonna bother him if he misses a few shots.”

Makes and misses, wins and losses all come with a hint of skepticism toward the end-result, which felt like a theme in the post-game scrum. “[Losing] is the same as if you win,” said Pop. “You go to the film, and there’s mistakes all over the place. That’s just the nature of the game.”

That’s not to say the Spurs’ recent struggles didn’t compel them to make an adjustment or two. Out from the starting lineup went the defense-oriented Dante Cunningham (H/T Jesus Gomez) and in came Davis Bertans (ditto), a change that will likely hold for at least another game. The lanky Latvian helped spread the floor and gave LaMarcus Aldridge a bit more breathing room to operate in the post. Facing the slower Jusuf Nurkic, Aldridge resembled his 2017-18 All-NBA self, pouring in 29 points (16 in the first half) on 11-of-15 shooting from the field through his usual diet of post-ups and pick-and-pops. The Spurs improved to 10-1 when he scores more than 20 in a game.

Another development was the career-high 33 minutes for Derrick White. Part of that was thanks to a neck injury to Marco Belinelli, but it also came through his even-keeled play and two-way contributions, which kept him on the floor through most of the fourth quarter. The second-year player had a tidy 10-6-5 stat line and was part of an all-around strong effort from the San Antonio guards to stick with Portland’s dynamic backcourt.

“Derrick White was great tonight,” said Pop. “He showed a lot at both ends of the court, so he deserves a lot of the credit for the composure that you might have seen.”

The nihilists of the NBA will take a W for whatever it’s worth in their eyes, but it’s performances like White’s and other positive adjustments that will ultimately carry more weight down the line. On Sunday, the Spurs were lucky enough to come away with all three.

A strong finish, for once

As terrific as Aldridge is at boxing opposing bigs out, he’s not going to outleap anyone. Nor is he prone to bulk rebounding nights like Andre Drummond or DeAndre Jordan. Winning the board battle is a team game for the Spurs, and that means the guards putting in the kind of effort we saw on Sunday. DeMar DeRozan, Bryn Forbes and Derrick White combined for 16 rebounds on the night, many coming from checking bigger players and working hard around the basket.

Defense still MIA, but with signs of improvement

As much as Pop would like to carve out a defensive identity, it was an offensive rating of 132.9 that won the game for the Spurs, who still had issues in containing dribble penetration. There were glints of progress though, with San Antonio often forcing Portland into late-clock situations. There was also one instance of Nurkic being called for a three-second violation while waiting too long for a possession to develop, thanks in large part to the Spurs’ effort on the perimeter.

Patty Mills’ tempo and overall play were a boon once again

It’s worth noting that Mills is having a great, if understated, season. He had 15 points and 6 assists and played a big role in the Spurs’ 17-4 run to start the second quarter, pushing the pace, using Nash dribbles to patiently feel out the Blazers defense, and putting up a tidy 5-of-8 shooting night from the field.

The Spurs seem to have benefited in their recent wins from facing teams amid rough stretches, including Sunday versus a Blazers group that has now lost 5 of their last 6. San Antonio’s last 8 wins are against them, the Oladipo-less Pacers, Golden State during a four-game losing streak without Stephen Curry and Draymond Green, a 4-7 Rockets team, Dallas and New Orleans (both in the middle of respective 6-game losing streaks), and Phoenix and Chicago (trapped in multi-year hells of their own making). Credit to the Spurs for looking better than they have in a while, but a little context matters here.