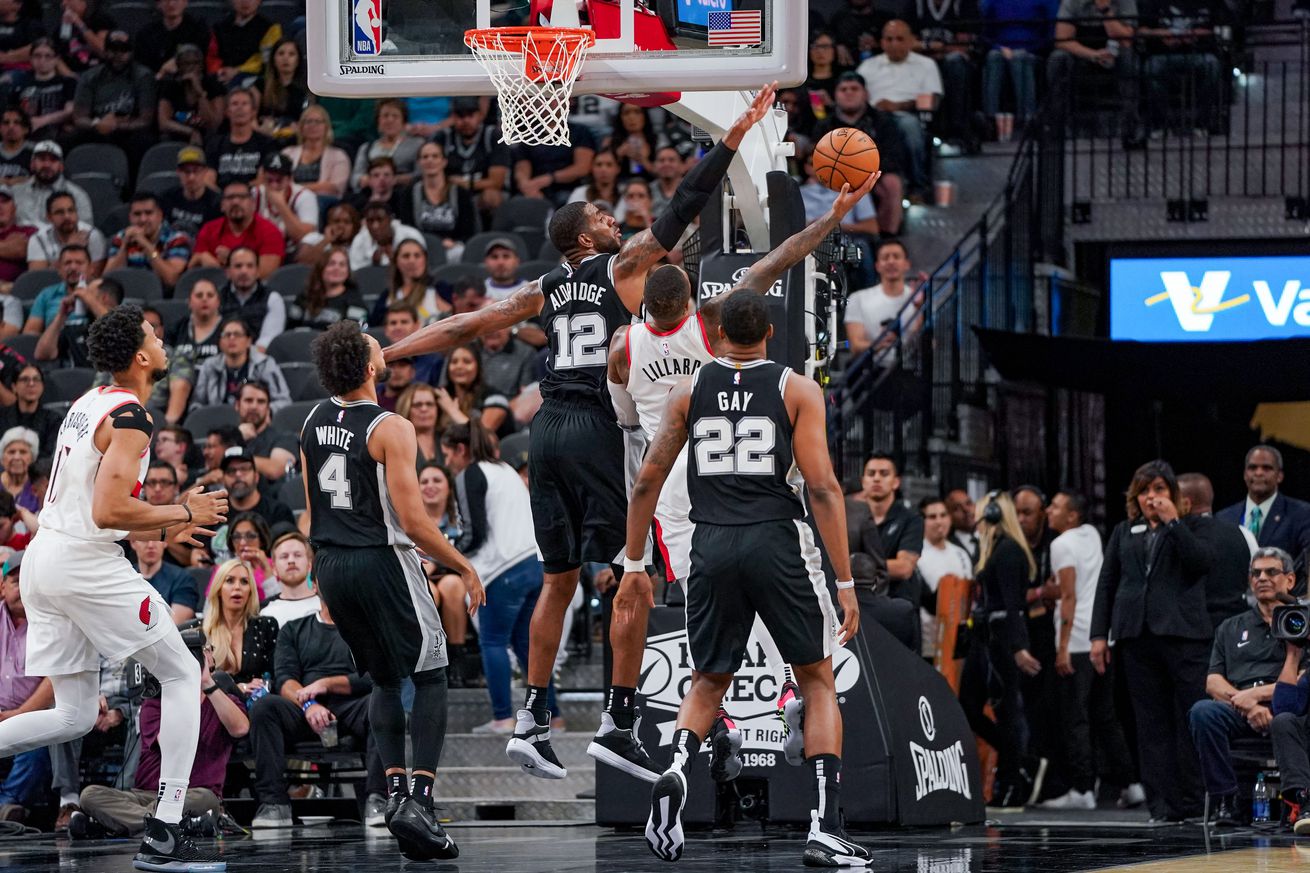 It was much closer than it should have been, but the Spurs remain undefeated.

These Spurs seem to love suspense. That’s the only explanation as to why they didn’t seal their 113-110 win against the Trail Blazers while they had the chance and instead had to rely on an incredibly lucky bounce on a Damian Lillard three-pointer to avoid overtime.

The only constant in the Spurs’ first three games has been an inability to play hard and smart for a full 48 minutes. On Monday they had two good quarters bookended by some awful play that almost cost them their undefeated status. The Blazers, on a SEGABABA and with Lillard in supernova level late, deserve an enormous amount of credit for fighting until the end, but without San Antonio’s collaboration they wouldn’t have been able to get to the last possession with a chance to pull off the comeback. Fortunately Lillard’s last shot went in and out to save the Spurs from embarrassment.

End of game set for the Blazers. Tolliver spins into a screen for Lillard to get him to the opposite corner. No idea what happened to Lyles but great effort by White to get himself in position to even contest without fouling. pic.twitter.com/STBeFkyv8f

The near fourth-quarter collapse will get most of the attention, which is understandable. The Spurs were leading by 19 points with under six minutes to go before failing to score for over three minutes and letting Portland, led by an inspired Lillard, back in the game.

But the start of the evening was similarly disappointing. The Blazers opened the game scorching hot from beyond the arc and quickly carved out a double-digit lead that would take the Spurs a long time to erase. Lackluster play by the starters early was a staple of too many games last season and it returned to haunt San Antonio on Monday. Small mistakes on defense piled up and the offense was too passive and predictable. Instead of striking early to put away a tired, road weary opponent, the Spurs gave the Blazers life and had to spend a lot of energy later on to make up for their first-quarter complacency.

As frustrating as the beginning and the end of the game were, the middle part did provide signs of how good this team can be when everything is clicking. The bench provided its usual jolt of energy when it was most needed, with Derrick White leading the way on offense. The stars, while far from playing perfect games, produced in the way they are expected to. Depth still looks like a huge strength, as there’s always a role player ready to step up when another one struggles. Turnovers were an issue throughout and the lack of outside shooting remains a problem, but these Spurs look like they have the pieces to be solid every night and dominant when things go well. Which makes the stretches in which they look clueless or borderline disinterested all the more maddening to watch as they happen.

The challenge for fans so far has been to remain focused on the big picture. Right now the Spurs are 3-0 and a lot of their issues on both ends can be attributed to early-season sloppiness. No one wants to peak before 2020 even starts and expecting no struggles on a team with two new starters would have been silly. Consistency should come in time.

The Spurs are fine. We all know that. It would just be a lot better to not have to remind ourselves of it every game when they decidedly don’t look like it for a few minutes.

Next game: @Clippers on Thursday

The Spurs will visit Kawhi Leonard on their first road game of the season. They’ll need to be sharper than they were against the Blazers to escape the Staples Center with a win.