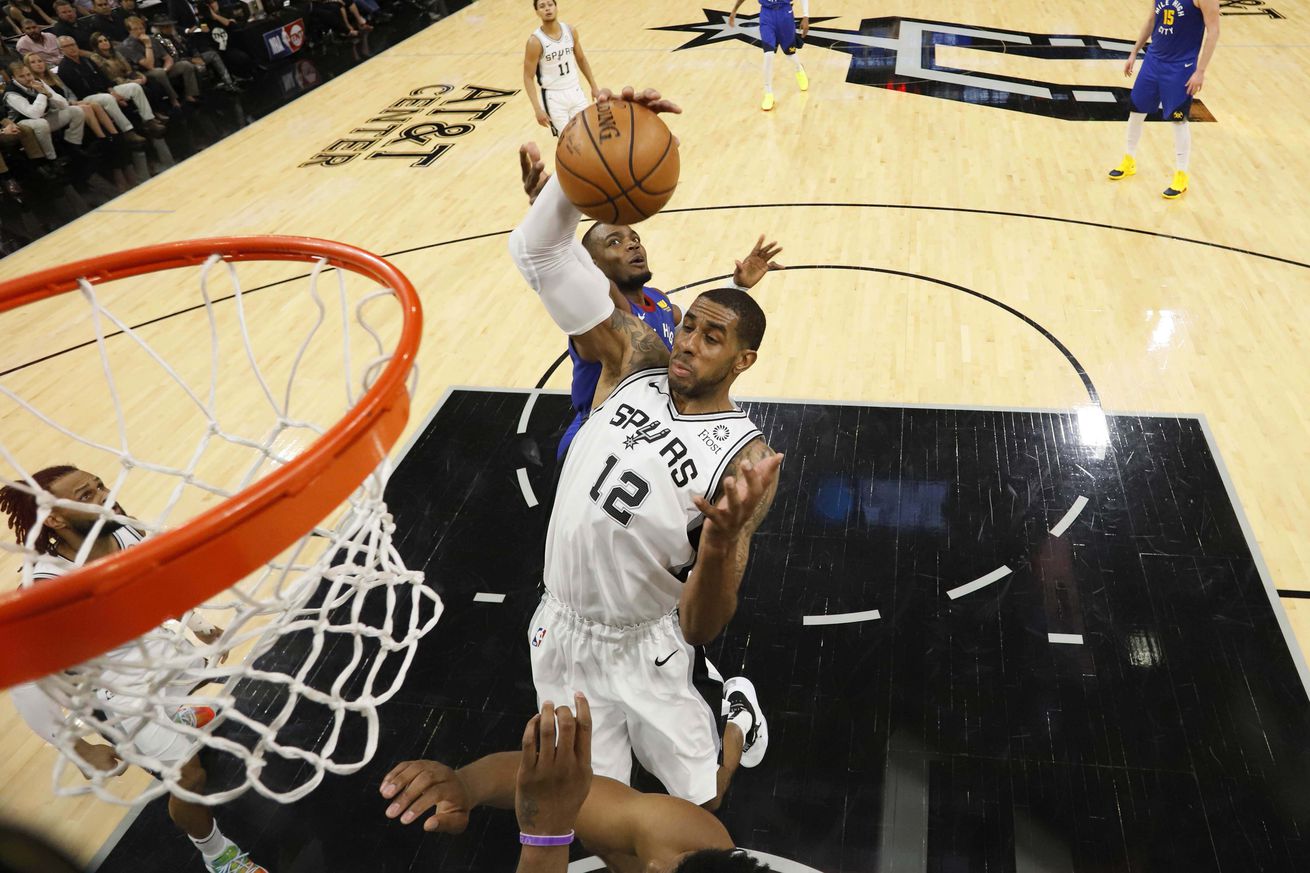 With their backs against the wall, the Spurs overcame a career night from Nikola Jokic to push their series with Denver to a decisive Game 7.

“We’ve all been in every sort of game — behind 3-2, up 3-2, up 3-0, everything,” began Gregg Popovich on Thursday, putting an answer to a pregame question in terms that I’m quite sure no one in the room could actually relate to. Not me, not Project Spurs’ Paul Garcia, not even the coach in the opposing locker room, Michael Malone, who was himself heading into his first career Game 6, as well as his first elimination game.

“If you’ve been around a while,” added the veteran coach, “you’ve seen it all, and you’ve been in all those situations. It always comes down to individuals who come to have a good game and putting the ball in the hole. You can look at a series and always look at what players stepped up in certain games, who won or who lost and look at what the shooting was that night. Especially these days, with three-point shots.”

Shotmaking is crucial and appreciably tangible, as the Spurs proved in their 120-103 Game 6 win. Harder to quantify is the value of experience on the sidelines or on the court in the NBA — although Pop’s 22 straight postseasons were evident in the way the Spurs’ coach comported himself before the game, speaking calmly and almost gregariously on all topics, a mood that likely permeated to his players, and after the game, as he intently shot down every grasp at narrative, any hint at strategy and whatever else a nonplussed group of reporters could muster.

That same experience probably had something to do with what happened in between, too.

The Spurs came out on Thursday trusting in what got them into the playoffs. Sticking with the same starting five, San Antonio rode the dual playmaking and shot-creating of DeMar DeRozan and the left-block grunt work of LaMarcus Aldridge (26 points, 10 rebounds, 5 assists), who might as well have been putting up shots in his driveway the way he pivoted, nudged and turned into his 14-footers.

DeRozan, whose tricky footwork hasn’t been enough to shake the playoff reputation that followed him from Toronto, had another strong performance in the win. His stat line (25 points on 12-of-16 shooting, 7 assists, 7 rebounds) was a story of two halves, the 1st dedicated to setting up teammates (he got all of his assists in the first half) and the 2nd with him in a more deliberate attack mode. The pivot seemed to occur in the final moments of the 2nd quarter, as what appeared to be a DeRozan and-one had its continuation waived off (much to the delight of an AT&T Center crowd that was already growing impatient with the officials), granting him instead two shots at the foul line with 0.8 seconds to go. The Spurs guard made the first and clanked the second, following his own miss and muscling the ball back into the basket before the buzzer sounded. The shot gave DeRozan his 7th point of the half and the Spurs a 64-60 lead, his only three-point play of the night and one that happened in as unconventional a way as you could imagine.

It was a play that Malone lamented after his team’s loss:

“I think the one play that sticks out to me, that’s a microcosm of this game: .8 seconds to go, 2nd quarter, free throw, and we’re standing, DeMar DeRozan misses, no one boxes him out, he grabs it and lays it in. The attention to detail was not there tonight, and we have to be much better there obviously.”

While their hot hand from beyond the arc came back (10 of 24, even with 7 Patty Mills misses), it was their typical combination of ball movement, penetration and shot-making in the midrange that put the San Antonio offense back on track. As PtR’s Jeje Gomez noted, the Spurs shot an absurd 20 of 29 on midrange attempts, an effort that sustained them through their inevitable lull in the 2nd quarter and through their early 4th quarter push that got the lead back to double digits for good. For most of its 16 teams, the playoffs are less a journey and more a series of temporarily affirming moments. The iconoclastic 2018-19 Spurs had themselves one in Game 6, imposing their weird will and giving their throwback style, at worst, a final swan song to hang their hat on. At best it was proof, once again, that there’s more than one way to play winning basketball in 2019.

And yet, there were deviations from the norm, too — marginal, meaningful ones — that also made a difference in the Game 6 win. Key reserve Davis Bertans was benched for the 2nd time this series, cutting a 9-man rotation into 8 as San Antonio played big more often (winning the rebounding edge as a result) and relied on more mobile players on the perimeter to close out on Denver shooters and limit their opportunities from beyond the arc.

The last point is a big one and is something that Malone and the Nuggets will need to unpack as the series heads to Denver. The Spurs gave up a big night to Nikola Jokic (43 points, 12 rebounds and 9 assists, to be precise), leaving the talented big man to work in isolation or in a strict two-man game in the pick-and-roll rather than disrupting an entire defense and creating back-breaking plays. The gambit allowed Jokic to run ramshod against guys like Jakob Poeltl and Aldridge, as he thrived in the pick and roll and feasted on offensive boards (often his own), but also seemed to come at the expense of guys like Torrey Craig, Will Barton, and Malik Beasley, who collectively shot 4 for 19 from the field in the loss. The Nuggets’ 6 of 24 shooting from deep was undoubtedly a result of how San Antonio guarded its most talented opponent for much of the night.

I asked Pop about that focus after the game — a gambit in itself considering the Spurs coach routinely bristles at talking strategy. The decision is worth speaking to, however, not only because of its role in the win but because of the pressure it now puts on the young Nuggets to adjust heading into the final game of the series.

“Well, the plan is the plan,” he said. “Sometimes things work and sometimes they don’t, but I’m probably not going to discuss the plan with you, with all due respect. I’m not sure why I would do that.”

The response could’ve been different — more ornery or more telling — but the Spurs coach is in playoff mode, conserving all energy and focus for Game 7. It’s another familiar situation for him, and another new set of circumstances for his opponent, who now, too, has its back against the wall.

A bounce-back game for Rudy Gay

Whatever was missing for Gay for most of this series seemed to return, at least for one night. The forward chipped in 19 points on 7-of-11 shooting (including 3 of 3 from deep on shots he confidently stepped into off the catch), as he anchored a San Antonio bench that was, for once, a boon.

Gay’s 19 were huge, but the Spurs also outscored the Denver reserves 31 to 13, getting big lifts from Marco Belinelli (9 points) and Patty Mills, who made up for an ice-cold night from three by persistently pushing the pace, finding teammates, and attacking and finishing around the rim.

A strong recalibration for Derrick White

White’s best game of this postseason is probably behind him, but it was still encouraging to see how he showed up for most of Game 6. Save for some flustered moments in the 2nd quarter as he picked up 3 quick fouls, White made more of an impact on the defensive end and did a good job balancing game-management and aggressiveness on the other. He finished with 13 points on 4-of-7 from the floor.

Nuggets (probably) not letting go of another Poeltl incident

If I had to guess what narratives would trend this series, “Jakob Poeltl: dirty player?” would have been towards the bottom. In his first season in San Antonio (which, I assume, are an accurate representation of his first years in Toronto), the Spurs’ center has shown no tendency towards plays that endanger opponents.

And yet here we are.

The Nuggets sent a previous Poeltl screen that caught Jamal Murray on the thigh to the league office (no action was taken), and it wouldn’t surprise me if the same occurs after Game 6. Again, Murray took a Poeltl knee to his upper leg, and this time he was noticeably more shaken up. The Denver guard stayed in after hobbling for some time, but was reportedly still limping after the game.

A bit of history going into Game 7

Saturday will the the Spurs’ seventh Game 7 of the Gregg Popovich era. They have split the previous six (3-3). Their last Game 7 was a loss to the Clippers in 2015.

The Spurs have won one Game 7 on the road in club history: 2008 at New Orleans in the West semis.

Spurs strike back in Game 6 to push series to the brink
Source: Pounding The Rock