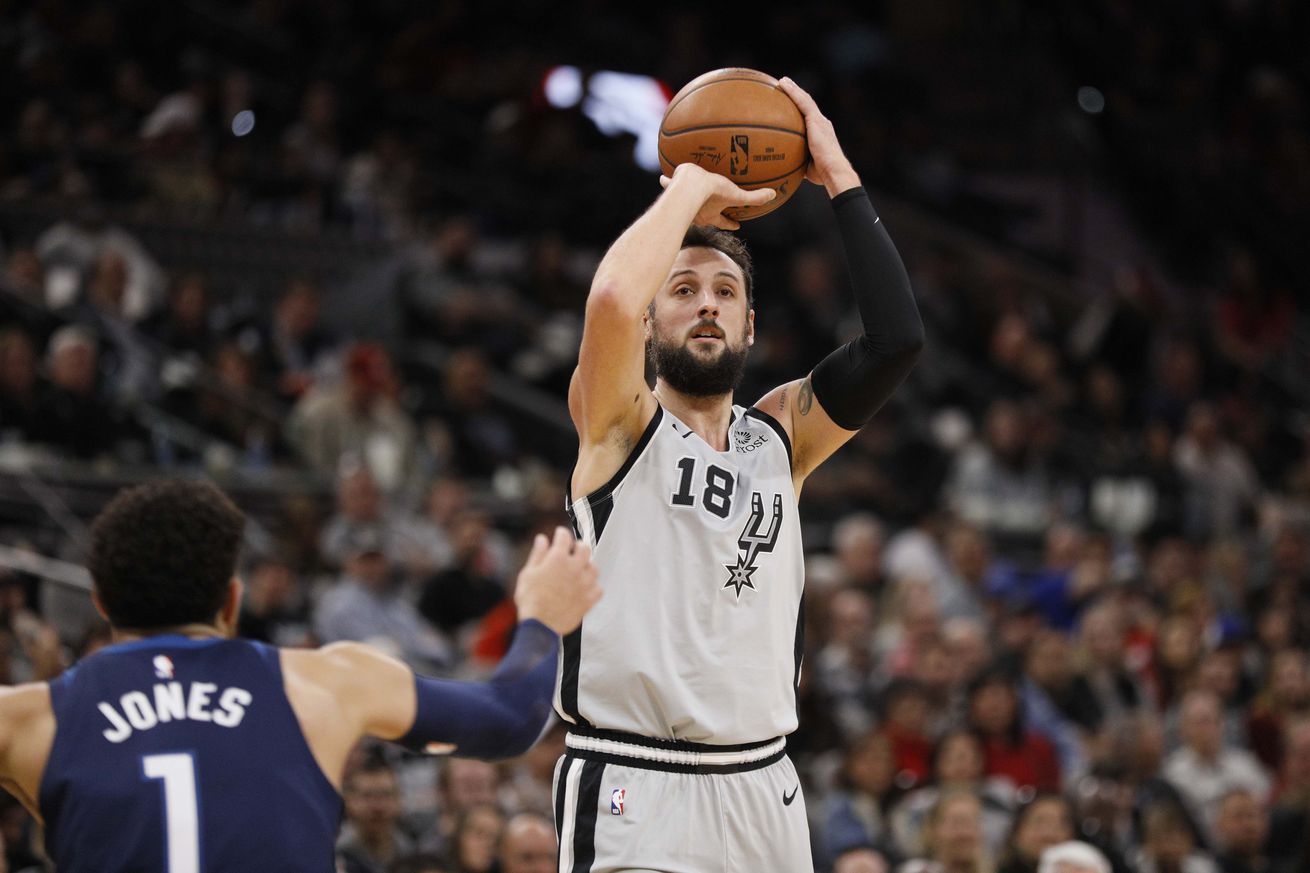 The unlikely trio of Forbes, Belinelli and Bertans combined for 54 points as the Spurs continued their torrid December stretch and rolled past the Wolves.

“San Antonio’s always played to their strengths,” the Wolves coach said before Friday night’s matchup. “They try to post LaMarcus quite a bit, but when their bench comes in the game changes a little bit. Patty Mills, Belinelli, Bertans — they get the pace up pretty good. If you let your guard down against those guys and they get those shots, they’re gonna make ‘em.”

His quote proved prophetic, as those same reserves routinely carved up the Minnesota defense, liberally flung the ball side to side to the open man, and played a big role in the Spurs hitting a season-best 19-of-32 beyond the arc, an uncharacteristically high volume for a team that came into Friday with the highest three-point percentage in the league but the lowest three-point rate.

“They were really helping and shifting on defense,” said Davis Bertans, who had 15 points on 5-of-7 shooting on threes. “We had some good looks already after the first pass, but then, driving and kicking, we could find pretty much anything wide open.”

For the second time this season, Bryn Forbes led all scorers with 22 points, shooting 7-of-12 from the field and adding 7 assists and 4 rebounds to round out one of his best performances as a Spur. “He has worked so hard,” said Gregg Popovich of the 25-year-old who’s started every game for him so far. “He’s gotten to this level, and now he’s confident and he knows he belongs and he’s playing like it. He’s a special young man.”

The free-flowing nature of the game produced another season-best: 36 assists on 46 made baskets. Twenty of those were from DeMar DeRozan, Patty Mills and Forbes, and most came on smart, simple reads of a defense that closed out hard and consistently double-teamed the post. I asked Pop if he was happy with the ball movement he saw in the win:

“Well, you know, you get more assists when you make shots,” he answered, shrugging off the figure and, more importantly, letting slide my use of the dreaded ‘h’ word. “But everybody was willing. We did a good job sharing the ball, and then we made shots on top of that, so that makes for a really good night.”

Another day, another dominant win, and a greater sense — beyond what any stat can affirm — that the 2018-19 Spurs have turned a corner this month.

“It’s just a feel,” DeMar DeRozan (12 points, 8 assists, 5 rebounds) said of his belief that his new team would right the ship. “We had a lot of ups and downs at the beginning of the season, which was expected. We just stayed patient, continued to chip away at it. We had a great opportunity to come back home in December, having a homestand, and try to get our rhythm going and that’s where we’re at.”

Improvement can be measured, but there’s a subjective element to it, too, like the rhythm DeRozan alluded to. Consider the progress we’ve seen from Rudy Gay, one that extends beyond the 14-point, 5-rebound line he put up on Friday and is probably more evident in his effortless drive and dunk in the first half, or even his bouncy goaltending violation where he sprung in the air just a beat too late to get the clean block on a Taj Gibson hook shot.

Pop touched on what he’s noticed from Gay in his resurgent second season in San Antonio following a 2017 Achilles tear:

“If you’re the coach or trainer or strength person or whatever, when you watch, you see more of a spunk in their step — which I know doesn’t sound very scientific. But all of a sudden they’re changing direction more quickly, or they’re gonna go dunk a basketball when they have the opportunity to do so. You can see that in their movement patterns, but it takes time, and it’s different for every individual.”

The same abstract signifiers apply to the Spurs’ defense, whose progress has primarily been summarized by players through equally unscientific terminology like trust and effort. And while the numbers certainly back it up — they’ve posted the 2nd best defensive rating going back to December 6th — the rehabilitated defense also passes the eye test. In watching them operate as a sinewy network of bodies filling gaps, preventing backdoor passes, and sending help to cut off lanes, you see a team that’s beginning to figure things out on both ends of the floor and overcome the curve that we should’ve accounted for with the newly formed roster.

The Spurs become a top-five offense, continue to rise defensively

Another scoring bonanza propelled the Spurs to the fifth-best offensive rating in the league, just ahead of a team they’ll face on Saturday in the Houston Rockets. They’re also out of the bottom third in defensive rating, sitting at a much more palatable 19th at 110 points per 100 possessions.

Pop called Belinelli (along with Mills) one of the best players moving without the ball in the league, and both gave Minnesota fits on Friday. Belinelli finished with 17 points on 5-of-9 three-point shooting, knocking down a couple of his trademark off-balance jumpers.

I liked this pregame quote from Thibs, mostly because I think it touches on an aspect of “play efficiency” versus “shot efficiency” that’s sometimes overlooked.

“I think it’s more understanding the value of the shot… the efficiency of the post-up, the closer you get, the more points you’re gonna get out of that. And what also do you get off of it. Are you getting to the bonus early in the quarter? What are the value of free throws? Are you getting the double team that often times that creates the best ball movement in the league, because now the ball goes out and gets swung and you get wide-open threes and dribble penetration. I think it’s just understanding the value of the shots. And what the Spurs have always done it is look at the strengths of every player — you always try to take advantage of what your strengths are and cover up your weaknesses. Every team has different strengths. That’s just playing smart and giving yourself the best chance to win.”

Bow before my jinxing prowess

A day after I distilled the Spurs’ greatest strength as “discipline”, Aldridge and Gay got into foul trouble in the first and third quarters, the Wolves attempted 31 free throws, DeRozan got T’ed up for chewing out an official, and San Antonio turned the ball over an above-average 16 times.