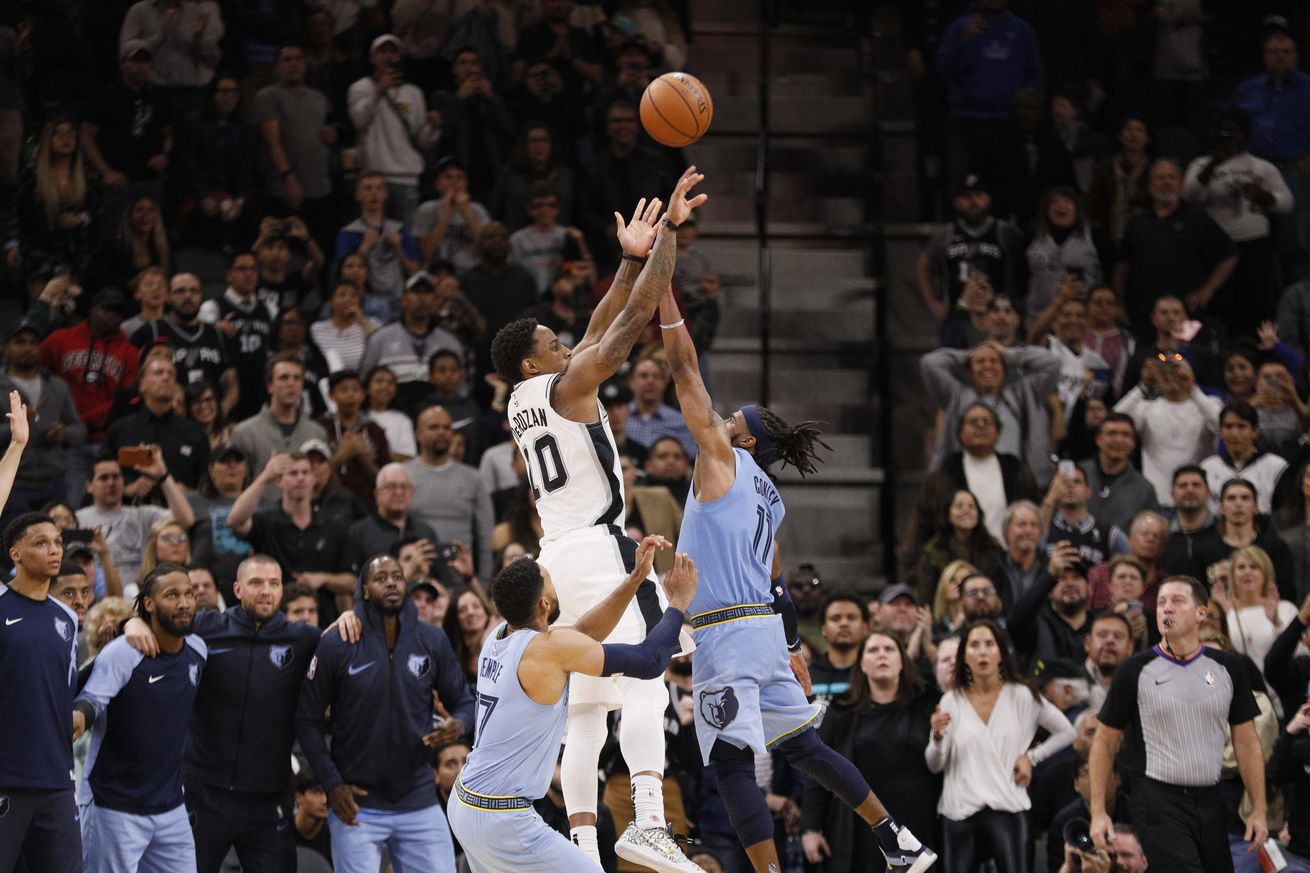 The game was there to be had, but it was San Antonio they got played.

On a night that looked to be a sure loss as recently as a few days ago, the Spurs managed to play both offense and defense in the same game against the rejuvenated Memphis Grizzlies. Grit and Grind is back with a vengeance, and with a healthy Mike Conley and Marc Gasol on the court, the Griz came into the evening in 2nd place in the West with the league’s 2nd best defense.

Undaunted, perhaps thanks to Coach Pop’s freshly shaved countenance or Tim Duncan’s attendance (coincidence?), the Spurs hung tight throughout the game. Despite getting off to a bit of a slow start and going down by 10 in the first 7 minutes, the home team surged back in front with a 14-3 run over the next four minutes, and neither squad built more than a 6 point lead the rest of the way.

Conley and Gasol were forces to be reckoned with all night long, and they used the pick and roll and pick and pop to devastating effect. None of the Spurs’ guards could stay with Conley – few can, to be fair – and he was able to get into the paint or step back for open looks seemingly at will, finishing with 30 points on just 23 shots, to go with 9 assists and 4 rebounds. But the Spurs played tough team defense, rotating to open men, helping on drives and mismatches, and made the Grizzlies work for everything.

The first half saw an unexpectedly brisk pace. Somehow, the slowest and 6th slowest teams in the league put up 120 points before halftime, with the Griz taking a 2 point lead into the locker room. The end of the 1st and beginning of the 2nd quarter in particular saw a resurgent Spurs’ offense score early and often against an outstanding defense. Things slowed back down in the 3rd quarter, and stayed that way for the rest of the game. Both team finished with just 92 possessions, the 4th lowest of the season for Memphis and tied for lowest of the season for San Antonio.

The Spurs made an effort to get LaMarcus easy buckets throughout the game. They used duck- ins, seals, and early posts, among other things, to get LaMarcus close to the rim or matched up against a smaller player. That part of the game plan worked, and LaMarcus finished the night with 19 points. Unfortunately, it didn’t have much effect on his shooting woes. It took him 20 shots and 9 free throw attempts to get there.

In crunch time, the teams’ stars traded body blows like heavyweight boxers, with Conley and Gasol taking every Grizzlies’ shot over the last 5 minutes, and DeMar, LaMarcus, and Rudy scoring all of the Spurs’ points in that time. Both defenses dialed up the pressure, and every bucket was dearly earned. The game came down to the wire, and looked for a moment like another chapter in the growing legend of DeRozing Time.

In an incredible ending to the game, DeMar hit a heavily contested 20-footer while fading away from the basket with 1.2 seconds remaining, only for Marc Gasol to draw a shooting foul with less than second left at the other end. Gasol hit both of his free throws to give the Grizzlies a one point lead, and the Spurs were unable to score in the mere 7 tenths of a second remaining, though it certainly appeared like LaMarcus could have earned his own trip to the line on their final attempt.

Close games tend to be coin flips over the long haul, though, and the fact that the Spurs were in this against such a good opponent is a good sign. A franchise like the Spurs shouldn’t put much stock in moral victories, but more efforts like this helps to forget the dismal performances of last week. They’ll win some and they’ll lose some, but at least they’ll have a chance.

Let’s start with the highlights.

And now the less rosy stuff.

Up next: at Pacers on Friday

The first half of another back to back that finishes up in Milwaukee. These next two games are going to be tough, so gird yourself for hard times, it might be a rough weekend.