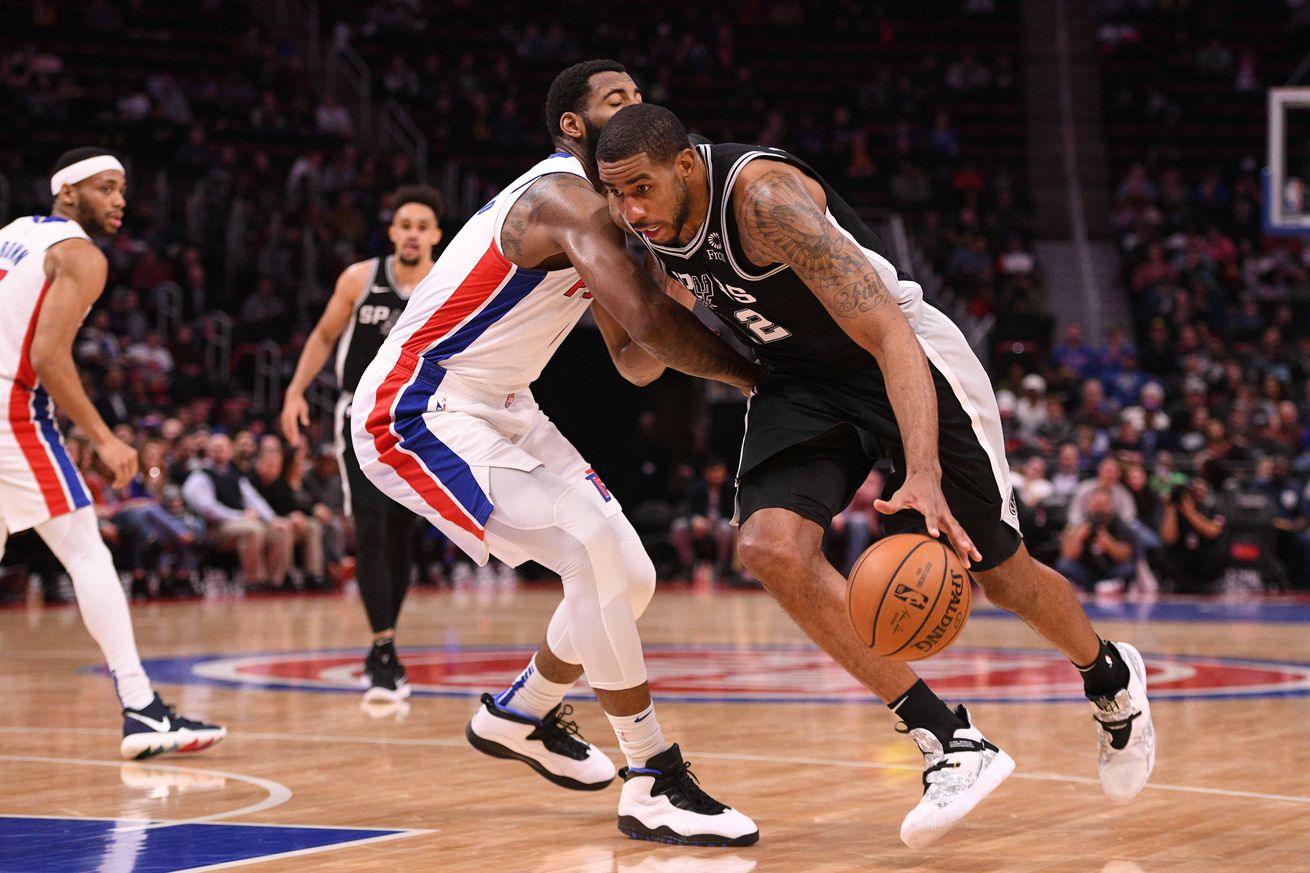 The stars did their job but the role players proved to be the difference in Detroit.

The Spurs extended their stretch of great recent play with a 119-107 victory against the Pistons. They are now winners of five in a row and are slowly quieting concerns about their ability to beat teams away from the AT&T Center.

In a night in which LaMarcus Aldridge and DeMar DeRozan combined to score 51 it might seem strange to start off by highlighting how important depth was for the Spurs, but the role players deserve as much praise as the stars do for Monday’s win. With the starters not clicking early it was up to the bench to break the Pistons’ defensive pressure and keep the team in it. The subs answered the call, first battling Detroit’s starters until the end of the first quarter and then powering a run that would give the Spurs control of the game in the second, when Dwane Casey had no choice but to send his bench to the court. At the half San Antonio’s non-starters had 23 points to the Pistons’ eight.

It wasn’t just the bench that showed up. The Spurs only had eight rotation players they trusted due to Rudy Gay’s absence, but every single one of them could be counted on to contribute something. The beauty of having true depth is that it makes the team less susceptible to individual struggles. DeRozan not being able to get to the line could have caused the offense to sputtered, but Derrick White was there to pick up the slack. No Spur had more than seven rebounds, but six had at least four. The point guards couldn’t dish dimes, but Davis Bertans could. San Antonio has found a rotation in which everyone has a specific role but can also adapt to fill a different one if needed.

The Pistons don’t have that luxury, so they had to get experimental to survive some subpar performances from regular contributors. Casey went deep into his bench for help, even dusting Glen Robinson III, but he couldn’t find a spark plug to complement Griffin and Andre Drummond. At different points some guys made an impact at the individual level, but it didn’t have an infectious effect on the other role players. The comeback attempts never got any momentum. It allowed the Spurs, which were decidedly in control from the second quarter on, to simply devote their effort into managing their lead. They did exactly that. There was no letdown in the third despite some early turnovers or lack of focus closing the game out.

The stars do deserve a lot of credit for the poise the Spurs showed throughout the game. Both Aldridge and DeRozan were extremely smart about taking the right shots. Instead of attacking the strong defender assigned to him, DeRozan hunted mismatches by setting a screen to get the switch. Aldridge, meanwhile, set up the threat of his jumper with some early pick and pop opportunities and then made some drives when his defender, typically Drummond, closed out too aggressively. With Gay out, the Spurs needed those two to play efficiently instead of attempting to do to much, and they did. The duo looked in control all game long.

With Monday’s victory, the Spurs have now stringed together five in a row, including some quality wins against the Celtics and Raptors. After being on the outside of the playoff picture looking in early in the season, they now have the fifth best record in the West.

More importantly, they have now played five solid games in a row away from the AT&T Center. If they can continue to compete on the road like they have recently, climbing further up the standings is a real possibility.

Next up: @Grizzlies on Wednesday

The Grizzlies are a disaster right now. If the Spurs show appropriate fear and take the game seriously, they could string together three road wins for the first time this season.