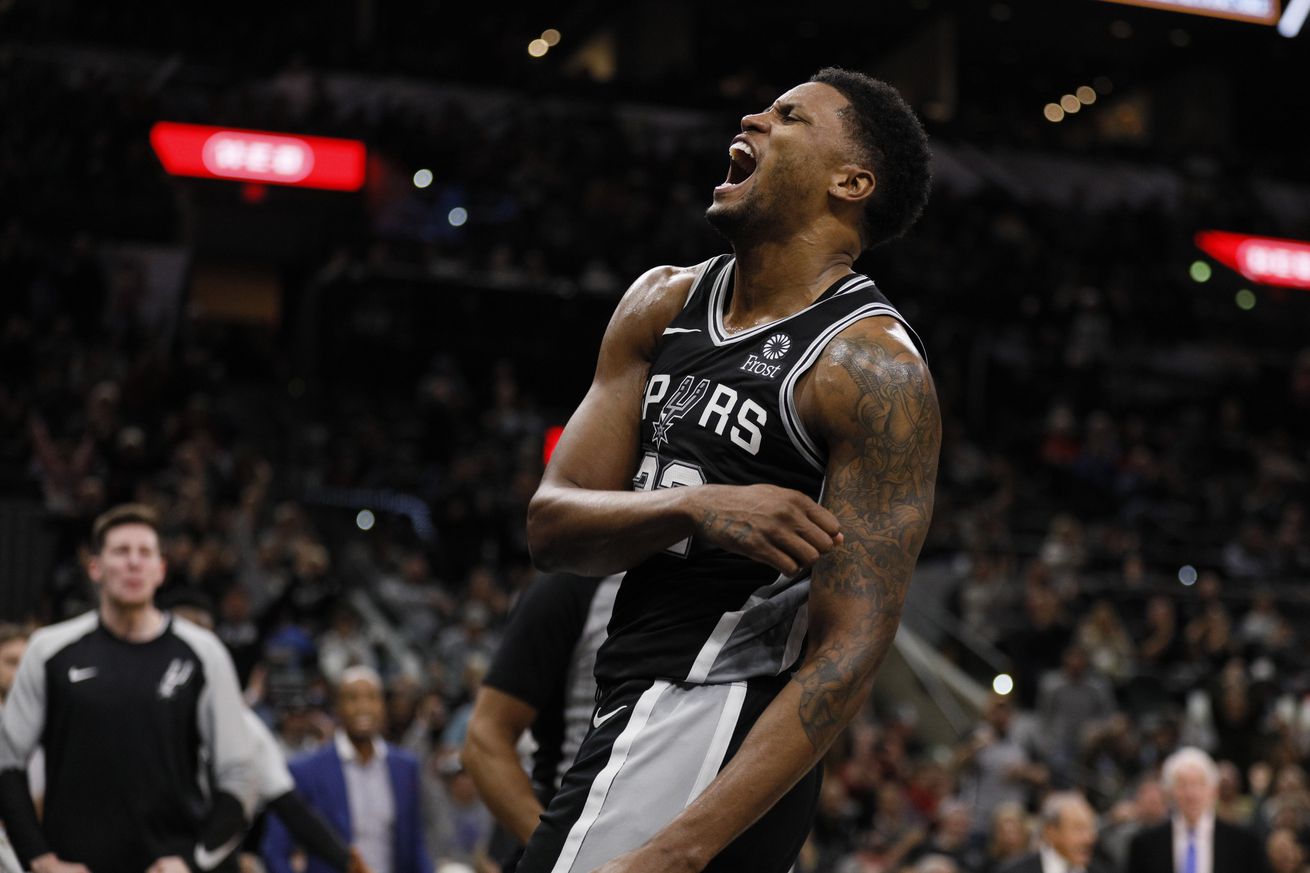 With a combined 69 points (and zero three-pointers) from DeMar DeRozan, Rudy Gay and LaMarcus Aldridge, the Spurs picked up a second win in a row by tightening the defense and imposing their retrograde style on the visitors.

Almost anyone on the planet would be ignoring conventional wisdom by deciding to dribble a basketball in the direction of Rudy Gobert as he lurches patiently under the basket. The defending Defensive Player of the Year and owner of a 7’9” wingspan represents a physical manifestation of an opponent’s bad intentions, poised to obliterate shots at the rim at any moment.

And yet that seemed to be a fundamental part of San Antonio’s gameplan in Sunday night’s 110-97 win over the Utah Jazz. Every Spur from Bryn Forbes to LaMarcus Aldridge drove confidently into the paint (and at Gobert’s outstretched arms), where they outscored the visitors, 52-to-38. All three of Derrick White’s buckets, two of which were dunks, came on audacious forays towards the Stifle Tower. Equally unfettered was Rudy Gay (23 points, 15 rebounds), who put Gobert on at least one poster and did much of his damage in the painted area.

Shrugging off recent duds — including one versus this very same Jazz team — the Spurs played Sunday’s game on their terms, attempting a season-low 14 attempts from deep (they would’ve had the lowest of any team this season if not for two empty tries in the final two minutes) and letting the wattage of their three talented scorers power their inside-out offense. Gay, LaMarcus Aldridge (20 points on a very in-rhythm 10-of-15 shooting), and DeMar DeRozan (26 points, 8 assists, 6 rebounds) all found their comfort zones, taking turns seeking out mismatches and getting to their spots on the floor.

When that coincides with the type of defensive effort displayed on Sunday, good things will happen. And while the Spurs were far from perfect on that end of the floor, the improvements were evident: aggressive close-outs on spot-up shooters, intuitive rotations and smart switching on the perimeter, and deflections and plays around the rim. The latter two elements are ones that have been desperately missed this season, with the incoming personnel seen as a significant downgrade in terms of sheer defensive talent. The Spurs are hanging their hopes on the idea that intangibles like communication and basketball IQ will shore up that gap.

“The last couple of games we’ve looked better on the defensive end,” said Pop afterwards. “More communication, a little bit more understanding. Guys getting used to playing with each other and understanding what the process is for the way we want to play. I think it’s sinking in, so we’ll see if it continues — it’s about consistency and we haven’t had that.”

In a number of ways the Spurs flipped the script from their 139-105 on Tuesday in Salt Lake, a game headlined by Utah’s franchise-record-breaking night from beyond the arc (20 made threes) and one in which Gay couldn’t muster a single point. In San Antonio, it was the Jazz who came out ice cold, making just 4 of their first 17 attempts from deep, with star guard Donovan Mitchell held scoreless in the first half. While that changed in the second half (he finished with 27 points), the San Antonio defense continued to make it tough for he and Ricky Rubio (26 points, 2 assists) to penetrate and, when they did, to create better looks for others.

Smart defense; low pace; a sensible number of threes: they’re the pillars by which this team will live and die on most nights. But can we as fans get carried away with the hyperbole and narratives behind that approach, that the Spurs are heretics of the analytics age, consciously shirking the pre-accepted ideal that there’s but one way to play winning basketball in 2018? To get a feel for where the team stands, I asked DeRozan whether they were in any way out to dispel the notion that it’s impossible to succeed playing their way. His response:

The Spurs are likely aware of the doubt-ridden conversations surrounding their against-the-grain, mathematically suboptimal style of play. That they’re willing to lean into it, with quotes like DeMar’s and victories like Sunday’s, is what will continue to quietly make them one of the more compelling teams in the league. In their own way.

Sunday marked Gregg Popovich’s 1,210th career win, tying Pat Riley for 4th all time. With Phoenix on the docket on Tuesday and four more home games left in this homestand, he should be stepping into sole ownership of 3rd place pretty soon.

Bertans out for personal reasons

A late addition to the injury report which included Pau Gasol (foot soreness) and Dante Cunningham (abdominal strain), Davis Bertans was not in uniform for undisclosed personal reasons. His absence certainly contributed to an abnormally low (even for the Spurs) total number of threes.

Picking up another start, Derrick White made noise with a couple of emphatic dunks and played a role in the Spurs’ strong defensive play, making smart reads and anticipating passes. He had 3 steals to go with 6 points and 4 rebounds.

The Austrian big’s stat line also won’t jump out (2 points, 6 rebounds, 2 assists), but he was once again a positive on the floor in relief of Aldridge, active on both the defensive and offensive glass and getting the rare block on a Gobert dunk attempt towards the end of the game. Day by day, he and White appear to be coming into their own.

DeMar on his mom’s long-awaited meeting with Pop

“It’s crazy,” said DeMar when asked about his experience thus far playing for Pop, “I got cussed out by my mom this morning. She’s been dying to meet Pop, she told me the other day, I better make sure she gets to meet him. So to have that excitement from my mom, being able to play for a guy like Pop, that’s respected the way he is, that’s an honor.”