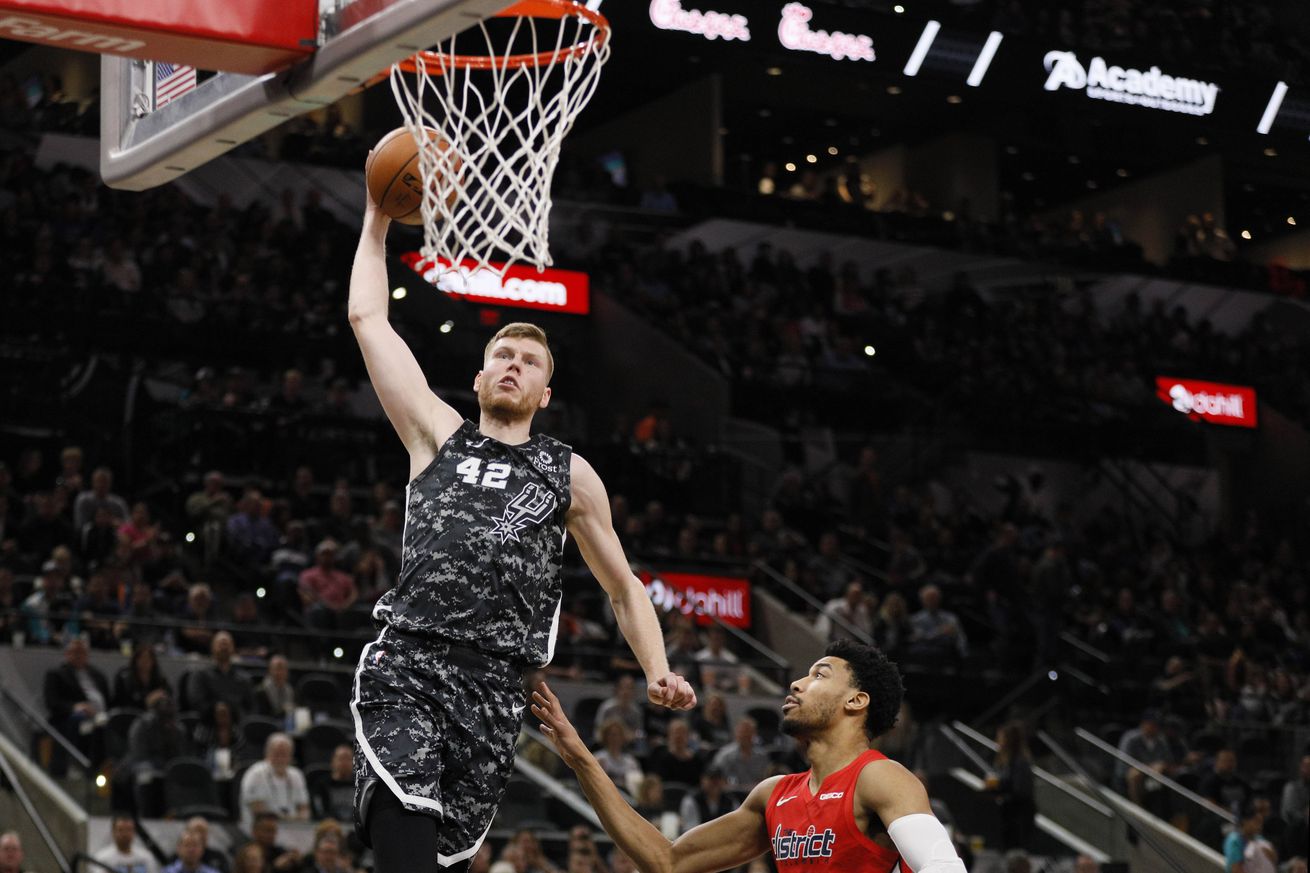 Behind big contributions from LaMarcus Aldridge and Davis Bertans, San Antonio improved to 29-22 and opened its four-game homestand with a W.

It took Gregg Popovich all of 16 seconds to call a timeout in Sunday’s matchup versus the Wizards. Prompted by a blown rotation that allowed an open dunk on the night’s first possession, the Spurs coach made sure his team wouldn’t come out with the same listlessness that many viewers likely had as they tuned into an early-evening tilt in January against the short-handed visitors.

But because it was the Spurs and Wizards playing basketball in San Antonio, there was also a fatalistic element to the game, with Washington coming in on an 18-game losing streak in the Alamo City dating back to December 1999. Thanks to LaMarcus Aldridge, Davis Bertans, and the fire that Pop occasionally had to light under his team, the Spurs pushed that number to 19, snagging the 132-119 win and opening their four-game homestand on the right foot.

“It’s because we played the last two home games really poorly,” Bertans said when asked about one of Pop’s quick-trigger timeouts. “And he wasn’t gonna let us slide with those small mistakes. After the game, he said we’re gonna make those mistakes, but it’s gonna help us get better, and it’s gonna be teaching points.”

With DeMar DeRozan missing a second straight game with knee soreness (although there’s some thought that fans needn’t be too concerned), the Spurs unleashed an Aldridge-heavy attack on a thin Washington frontcourt that was without Dwight Howard and Ian Mahinmi, playing early and often out of the low block. It left Thomas Bryant and Jeff Green to try and contain Aldridge, who spent part of the first quarter settling for turnarounds before taking greater advantage of the mismatch inside. He finished with 30 points (on 12 of 21 shooting), 9 rebounds, 6 assists, 2 steals and a block, with the mild wrist injury he appeared to sustain in Philadelphia appearing to be a thing of the past.

On a good night, Spurs games are a practice of well-disciplined attrition. You can’t expect this group, especially missing one of its two best players, to win every quarter, but victory can be obtained in the aggregate: through squandering fewer possessions, making free throws, and letting the Good to Great approach guide every offensive set, whether it means finding the open three-point shooter (the Spurs knocked down 16 of their 34 treys) or creating a good look for the right person inside the arc (they also made 63.5% of their twos).

The man who did the most damage from distance was, perhaps unsurprisingly, Davis Bertans, who continues to pace the NBA in three-point percentage. Bertans returned from a two-game absence for personal reasons to score a season-high 21 points on 5-of-8 shooting from deep, scoring his first bucket on a transition dunk.

Bertans was part of a strong overall bench effort that helped the Spurs build their initial double-digit lead in the first quarter and outscored the Wizards reserves overall, 54-27. That included 15 points and 7 assists from the indelible Patty Mills some more H-O-R-S-E antics from Marco Belinelli, who added 13 points.

In a season that’s had its share of injuries and lineup fluidity, one of the league’s strongest bench units has been more or less a constant. Between that dependability and the fire that still clearly burns in their coach’s eyes with every exasperated timeout, Sunday’s win was a reminder of the wee Spurs-isms that can help sustain a season.

A strong night from the starting backcourt

Two players have started all 51 games for the Spurs: LaMarcus Aldridge and Bryn Forbes, who poured in 16 points on 6-of-9 shooting, to go with 4 points and 4 assists. Forbes’ backcourt partner, Derrick White, had a similar line of 16-5-4 and added his usual pesky on-ball defense.

Another start for Gasol

After collecting a handful of DNP-CDs and falling behind Jakob Poeltl in the rotation, Pau Gasol got the start and played 9 minutes on Sunday, following the 22 he saw on Saturday in New Orleans. The Express-News’ Tom Orsborn said Gasol viewed these opportunities as an “audition” of sorts for an expanded role.

He also made his 5th three pointer of the season (on 10 tries), wresting the lead over LaMarcus Aldridge (4 threes made). I do not expect either to get an invitation to the Three-Point Shootout in Charlotte next month.

No Bertans in the Three-Point Contest

Per The Athletic’s Jabari Young:

So I’m told Davis Bertans wanted to participate in the #NBAAllStarGame2019 3-Pt contest, but got stiffed… apparently told he didn’t shoot enough of them… weird because I swear there are at least 2 guys in the contest who doesn’t either ‍♂️ #Spurs @TheAthleticNBA