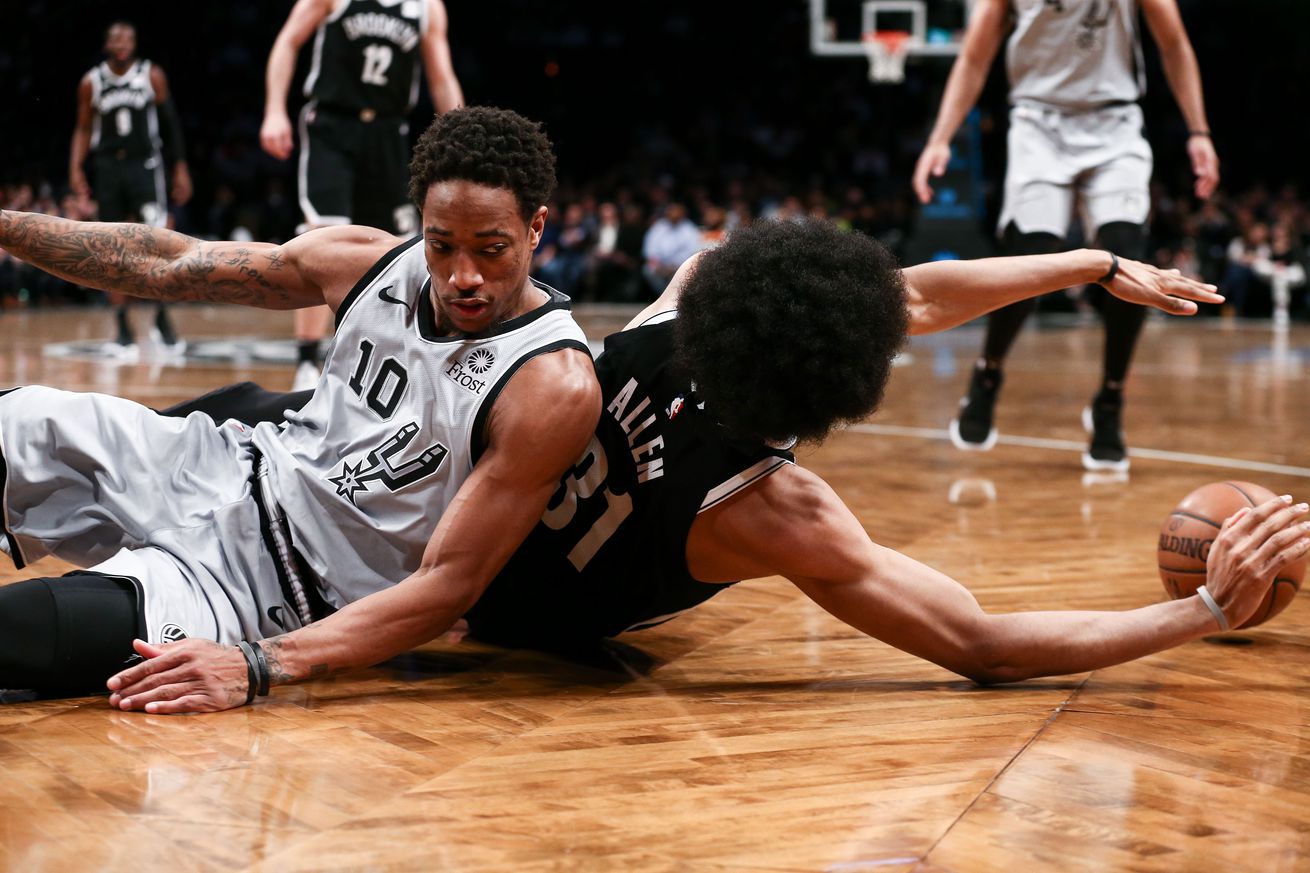 San Antonio once again fails to put it together on both sides of the court, this time struggling on offense.

I’m not actually sure what to write about after this game. I want to stay as professional as possible, but I also want to communicate the frustration I feel. The Spurs led in the first quarter, but after that brief moment, it was all Brooklyn Nets. The final score was 85-101, but that’s not really indicative as to how bad the Spurs were outplayed tonight. I know the rodeo road trip is a long, grueling stretch of basketball, but 1-7 is a seriously depressing stretch. Luckily for the Spurs – and all of us really – the team is coming home.

Coach Pop started Davis Bertans at the four tonight, relegating Rudy Gay to the bench. The five-man lineup of Derrick White, Bryn Forbes, DeMar DeRozan, LaMarcus Aldridge and Bertans came into tonight’s game with a net rating of +24 in 76 minutes, but as I’ve mentioned before, I feel like Bertans is wasted playing alongside the starters for long stretches of the game. He’s basically out there to act as a decoy, deterring opponents from doubling Aldridge in the post. I prefer him in an offense built around motion.

I’m not sure of the specific reason for this change, but Rudy Gay needs to be reinserted into the starting lineup. I’d like to see the Spurs to get back to the consistent rotations they had in place before Pop started tinkering with Pau Gasol’s minutes a couple weeks before the trade deadline. The nine-man rotation with Bertans, Patty Mills, Marco Belinelli, and Jakob Poeltl coming off the bench had been extremely productive.

After a poor showing in last night’s loss to the New York Knicks, the bench doubled down tonight. They were unable to find any semblance of rhythm on the offensive side of the court. Rudy Gay scored 13 on 5-9 shooting, but I consider him to be a starter. Bertans, Mills, Belinelli, and Poeltl scored only eight points on 28 shots. Eight points. 28 shots. Yikes.

It wasn’t all on the bench tonight though. I would be remiss if I failed to mention Bryn Forbes, who shot a tidy 2-14 himself. (After Mills has the same line Sunday night.) Forbes is now shooting under 30 percent from distance in the month of February. With physical limitations preventing him from playing adequate defense, his struggles on offense make him borderline unplayable. Except he’s still playing, so what do I know?

The Spurs only gave up 101 points this game; holding the Nets to 43 percent shooting. Some of that had to do with pretty decent defense (White and Bertans specifically) and some of that had to do with the Nets simply chunking up shots from deep during stretches of the game. The real issue was when the Spurs switched to a zone. They legitimately looked like they were attempting defensive sets on the fly. There was so much indecisiveness going on during these plays, I could feel the confusion from my couch.

I’m not the world’s best X’s and O’s guy, but here’s what my amateur eyes saw: The Spurs were overloading the strong-side of the court, typically with two defenders near the ball-handler at the top of the key. This oftentimes led to the Spurs being outnumbered on the weak-side of the court. A weak-side offensive player would cut to the rim, forcing the Spurs’ already-outnumbered defenders to collapse into the paint. At that point there was always a player left completely unguarded, typically hanging out in the corner. One simple pass later and the Nets had themselves a wide open jumper.

The Nets attempted what I believe was a season-tying 50 three pointers, but it’s hard to blame them when their offense was generating so many open looks. The fact the Nets missed a number of wide open looks was the only thing that kept the Spurs from getting blown out of the gym — and that’s considering San Antonio trailed by 23 with less than nine minutes left in the game. Again, I’m not sure if this was poor scheming, poor communication, or what, but I hope the zone never again sees the light of day.

The Spurs’ mid-range trio of Aldridge, DeRozan, and Gay all had solid games tonight. They scored 62 of the Spurs 85 points, and did so by attempting only 44 shots. That should be good enough for a Spurs’ victory as long as the role players have decent outputs. They didn’t. In fact, they combined to go 6-50 from the field. Why were the Spurs continuing to run plays for Forbes late in the game instead of relying on their stars? I’m all for team basketball, except when the supporting cast is shooting 12 percent.

White has struggled with his shot since coming back from injury, but he’s still to help the team in a variety of ways even when he isn’t scoring. Tonight he had six rebounds, four assists, three steals, one block, and played his typically-stout individual defense. One of his assists was a beautiful dime to Aldridge in the paint.

White’s single best attribute on defense (IMO) is his ability to fight over screens and stay in front of his man. I’ve seen him make several plays exactly like the one tonight against D’Angelo Russell.

It was another tough loss in a string of tough losses, but both the Los Angeles Lakers and the Sacramento Kings lost tonight, so there’s that. The Dallas Mavericks play the Los Angeles Clippers tonight, so maybe the Spurs will get extra fortunate this evening. If the Clippers win, the Spurs will drop to eight in the Western Conference standings. But none of it will matter if the Spurs can’t right the ship. Role players are notorious for coming alive at home, so here’s hoping.

The Spurs’ next game is Wednesday in San Antonio against the Detroit Pistons, which begins a three-game home stand, but all three games are against teams currently in the playoff picture. It’ll be a chance to see if this iteration of the Spurs have any fight left in them. Call me a homer, but I think we’ll be pleasantly surprised over the next week of basketball.