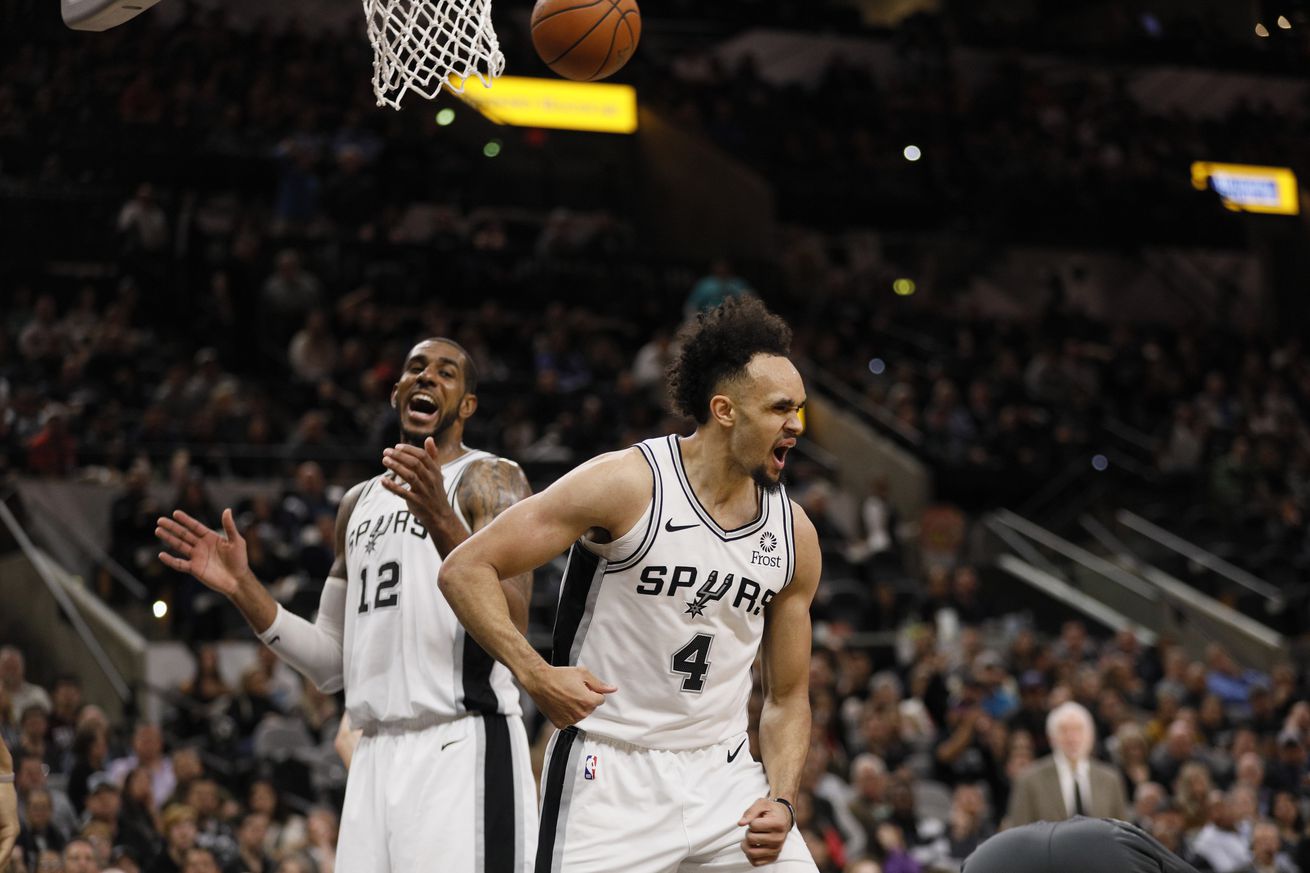 The second-year guard was the best player on the floor whenever he could stay on it, overcoming foul trouble to pace the Spurs and help lead them to a fourth-straight win.

While a better-than-expected season has helped make up for the Manu Ginobili-sized hole in San Antonio, it’s safe to say the lefty’s indelible absence was felt on one particularly batty Thursday night. In the latest in-arena wildlife encounter, four winged creatures descended upon the floor early into the Spurs’ matchup with the Brooklyn Nets, suspending play, prompting AT&T Center staff to step out clutching towels and at least one of those pool-cleaning nets, and leading every fan watching to make some variation of the same “Where’s Manu?” line.

The Spurs could’ve also used Ginobili when play resumed, whether it was contending with Jarrett Allen’s wingspan under the basket, navigating through the visitors’ pesky zone defense, or hanging onto an early double-digit lead. Instead, the Spurs found their way into a similar funk as a few nights earlier against Phoenix, succumbing to mental mistakes on both ends of the floor and allowing the visitors to turn the game upside down and take a 97-90 lead with under 8 minutes to go.

People had an eye on the past even before the bats drummed up old memories, with the Spurs taking two longstanding streaks into the evening: one, having sent someone to the All-Star Game for 21 straight seasons and, two, having not lost to the Nets since Game 2 of the 2003 NBA Finals. Thankfully, both streaks remained intact, as LaMarcus Aldridge got the good news 90 minutes before tipoff, and the Spurs gutted out their 16th straight home win over a well-coached Nets who’d won 7 of their last 8, their only loss on the road against the Celtics.

The freshly anointed All-Star played a large part in the result. Aldridge had 20 points and 13 rebounds (6 on the offensive end), imposing his will on the leaner Allen and helping the Spurs maintain a presence in the paint. Given the tendencies of Aldridge, Rudy Gay (15 points, 7 rebounds) and DeMar DeRozan (15 points, 10 rebounds, and 4 assists in a rusty return after missing 3 games), the Nets had all the reason to go into a 2-3 zone midway through the second quarter and eliminate the Spurs’ usual path to the midrange. It was an effective adjustment, forcing the Spurs to work the ball around the perimeter more and keep at least three floor-spacers on the court as often as possible. I asked Gregg Popovich about it afterward:

“Zones are tough for everybody in the NBA,” he said. “With the short clock, people just sort of stop. It’s a good move — [the Nets] have been real successful; they’ve used it quite a bit and it’s really helped them out. And there were times it gave us trouble, times we had good shots and missed them, but it keeps you on your toes and keeps you off balance, so it was a good tactic by Coach Atkinson.”

One player that had his way, whether it was against man defense, zone or in the open floor, was second-year guard Derrick White, who paced the Spurs with a career-high 26 points on 8-of-13 shooting (including 3-of-4 from three) while adding 3 rebounds and 6 assists in just 25 minutes. He would’ve seen the floor for longer if not for foul trouble that plagued him in the first half and third quarter, removing the Spurs’ best option for defending D’Angelo Russell and a guy who could not only probe the Nets’ vexing defense but shoot off the catch.

But White shook off the miscues that had limited his minutes (and visibly frustrated him at times) and, in one of his most brilliant performances in what’s already a shimmering sophomore season, controlled the action with aplomb. That included orchestrating the offense in the game’s pivotal possession with under a minute to go, as he took an exploratory dribble into the Brooklyn zone to draw a second defender, then dropped a pin-point pass to a rolling Aldridge, who scored and drew a whistle. The bucket and free throw gave the Spurs a 4-point lead that couldn’t ultimately be bridged, despite both teams’ best efforts.

Here’s White on his thought process on the decisive play:

“The floor was kind of spread. We had a lot of shooters down there. We had a mismatch, and I just tried to go over the top. He made a nice catch and finished.”

Already an even-keeled presence on the floor, White’s looking increasingly more poised in front of cameras with each featured post-game appearance. He’s a big reason that the Spurs, now 31-22, are where they are despite the injuries and offseason turnover — and why the team seems to be coping just fine without number 20 around. Bats and all.

Although Thursday was an off night for Bertans, his play as of late was worth asking about in pregame. Here’s what Pop said about the Latvian shooter, whose minutes have seen an uptick each month this season:

“He’s becoming more of a complete player. Everybody knows he can shoot but he’s figured out that people close on him which means that if he can catch it on balance and drive a close-out that helps him and it helps his team, and he’s finding open people. At the defensive end, he’s really tried to make that a focus and become a better individual and team defender. So, he’s improved significantly in that regard.”

Keeping an eye on the effectiveness of the starting lineup

Injuries have disrupted continuity, so it’s probably OK to withhold judgment a bit more, but the numbers so far don’t like the starting five of White, Forbes, DeRozan, Gay and Aldridge, who came into the game with a -3.0 net rating. They were a better +2 in nearly 7 minutes of action on Thursday, and may have seen more minutes had White not been in foul trouble, but it’ll be interesting to see if things continue to trend this way moving forward.

The Spurs haven’t always been on the right side of the deciding whistles this season, but the lack of one in this game’s final moments did not go unnoticed, even by Gregg Popovich, who apparently told Nets coach Kenny Atkinson that the refs not getting Aldridge for a foul on Napier’s three-point attempt was a “bad no-call” as the two shook hands after the buzzer sounded. So it goes.