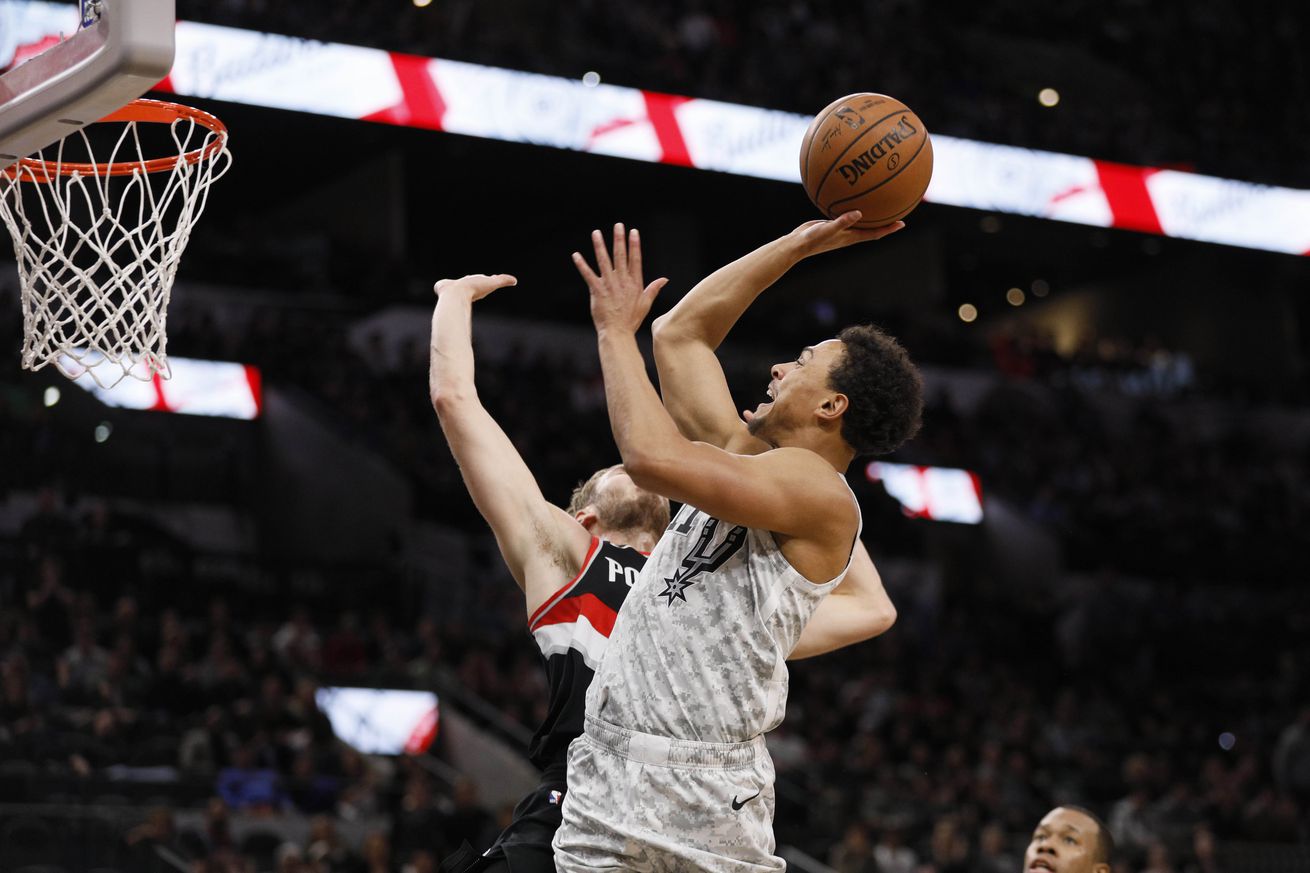 Behind DeMar DeRozan’s 21 points and a strong final push, the Spurs downed the visiting Blazers on their way to an 8th straight win.

The echoes of the Spurs’ post-game pep talk seemed to reverberate in the ensuing scrums — if not with any specificity then at least with enough thematic regularity to suggest a glimpse into the mindset of the league’s hottest team.

“Consistency,” said DeMar DeRozan, when asked of what is keying his team’s winning streak, which improved to 8 after Saturday’s 108-103 win over the Portland Trail Blazers. “When we struggled, we had quarters when we played well… now, we’re putting close to as 48 minutes as possible together of defensive effort.”

“Defensively, we’ve locked in… It’s something we’ve been doing — just flying around, being active is helping us.” said Derrick White, who scored 13 points and shadowed Damian Lillard for much of the night.

“I think we worked hard for 48 minutes,” said Gregg Popovich. “We were up, we were down, but they just kept playing. Every NBA game is available to everybody. So many teams are so similar that continuing to work through those 48 can always bear some fruit.”

If Pop’s answer feels like a permutation of the Stonecutter’s Credo, it’s because it might be. But it also speaks to the opportunism that’s baked into doing the right thing, the right way, over and over again.

Down 2 with 9 minutes to go, Marco Belinelli received a pass on the wing and took a couple of dribbles to his right, curling around screens set by Davis Bertans and LaMarcus Aldridge in the process before pump-faking and flinging it back to Bertans, who spotted up beyond the arc while Aldridge rumbled towards the rim. Rather than pull-up from three, Bertans tried to return the ball to a cutting Belinelli, only for the heave to deflect off his defender’s outstretched hand and bounce, auspiciously, to the feet of Bryn Forbes, already making his rotation from the far-side corner. Without hesitating, Forbes, who’d missed 4 of his 5 field-goal attempts until then, gathered the ball with a rhythm hop, and sunk the trey, 3 of his 8 fourth-quarter points, giving San Antonio its first lead of the 4th quarter.

Forbes’ final shot of the night was even more definitive, resulting from a DeRozan drive along the baseline and LaMarcus Aldridge screen that sprung him free for an open corner three on the far side — an all-too familiar sequence of events, even if the names on the back of the jerseys were different. The shot doubled the Spurs lead to 6 with 3 minutes to go, a two-possession difference that San Antonio would sustain through to the final horn. Fitting for the capitulating blow of the game to come off the team’s beloved Hammer set.

“Just keep shooting the ball,” the young guard said of his mindset in the game’s decisive 4th quarter. “That’s what Pop always tells me — shoot the ball. Don’t think about it.”

While a third-quarter injury to C.J. McCollum may have been the story of the Blazers’ loss, it was plays like Forbes’ that tell the story of how the Spurs have sustained their winning ways in March, through defensive discipline, execution, and a little serendipity. The longer a streak goes on, the more you need all of those to resist the variance that creeps in.

DeRozan (who had a team-high 21 points on Saturday) has made a habit of finding shooters like Forbes on the perimeter this season, a point of emphasis that adds understated efficiency to his game. Not only has he assisted on more three-pointers than any Spur, only Russell Westbrook has a higher pass-to-assist percentage.

“Every guy on the team knows when I have the ball, they know to find the open spot or get ready to shoot because I’m gonna find them. They already have that confidence before I even pass them the ball. A lot of guys, they expect it. I just try to get the ball there as clean as possible so they can get the shot off.”

But there’s a reason every post-game sound byte leads back to the other end of the floor, as it’s there where this season’s true epiphany has been. The Spurs have paced the league in defensive rating over their 8-game winning streak, leaning on their twin-big starting lineup but, really, playing better regardless of the size of the lineups Pop is throwing out there.

One of the central figures in the turnaround, Jakob Poeltl, matched a career-high in blocks (5) he notched 24 hours earlier against New York, to go with 8 points and 6 rebounds. After playfully hovering around White’s scrum — his head hiding conspicuously behind a television screen — it was Poeltl’s turn to weigh in on the team’s improvement on the defensive end of the floor.

“It’s about activity, it’s about playing together, it’s about a lot of things that just have to go together for us to be a good defensive team. We’ve managed to do that the last couple of games.”

23 years old and still finding his footing in the starting lineup, Poeltl is already one of the better quotes on the team. His summary of how the Spurs will need to move forward was equal parts candid and self-assured, a fitting punctuation to another performance that every player is simply looking to sustain.

“The mindset we have right now, [we have to] just keep that up. Don’t think that we have it all figured out and start slowing down. Just keep that energy up and we’ll be fine.”

McCollum, on his knee injury

Portland’s C.J. McCollum went down after a drive to the basket in the third quarter which resulted in a Poeltl block and, by his account, the Spurs big man inadvertently landing on him immediately afterward.

McCollum on injury: “I went up for a layup, a left-handed layup, and the big fella (Poeltl) blocked it and landed on my foot and kind of trapped my foot on the ground. I felt my knee kind of twist. I was in some pain.”

“I knew it was something when I landed,” McCollum told Jason Quick of The Athletic after his team’s loss. “I just don’t know what.”

While X-rays of McCollum’s left knee came up negative, the Blazers guard will have to wait until he gets an MRI to better understand the nature of the injury.

A rare off night for Aldridge

The All-Star big man didn’t have it going on the offensive end, scoring 12 points on 13 shots, as well as turning the ball over 4 times in the win. Aldridge still came up with some big blocks down the stretch (he had 3 total) and was on the floor for much of the Spurs’ big 4th quarter.

“Jak is all over the floor, running, doing all the dirty things,” said DeRozan. “I think he’s embracing and understanding that’s his role. He’s the best at it when he’s out there protecting the rim, running the floor, being the dirty guy — not in a malicious way, but with his energy. We feed off that.”

Having played with Poeltl for nearly three seasons now, is DeRozan surprised at all by what he’s seen from his former Raptors teammate?

“Not at all. When it comes to his athleticism, the way he plays, runs the floor, I’ve seen it all before. I’m just happy he’s out here, taking advantage of it.”

DeRozan, on the team peaking at the right time

“It’s the right time,” said DeRozan. “Coming down the last stretch, we want to be playing as well as possible. We’re making strides doing that. It gives us encouragement, when we go out there every single night and play against the top teams and prove that we can do it.”