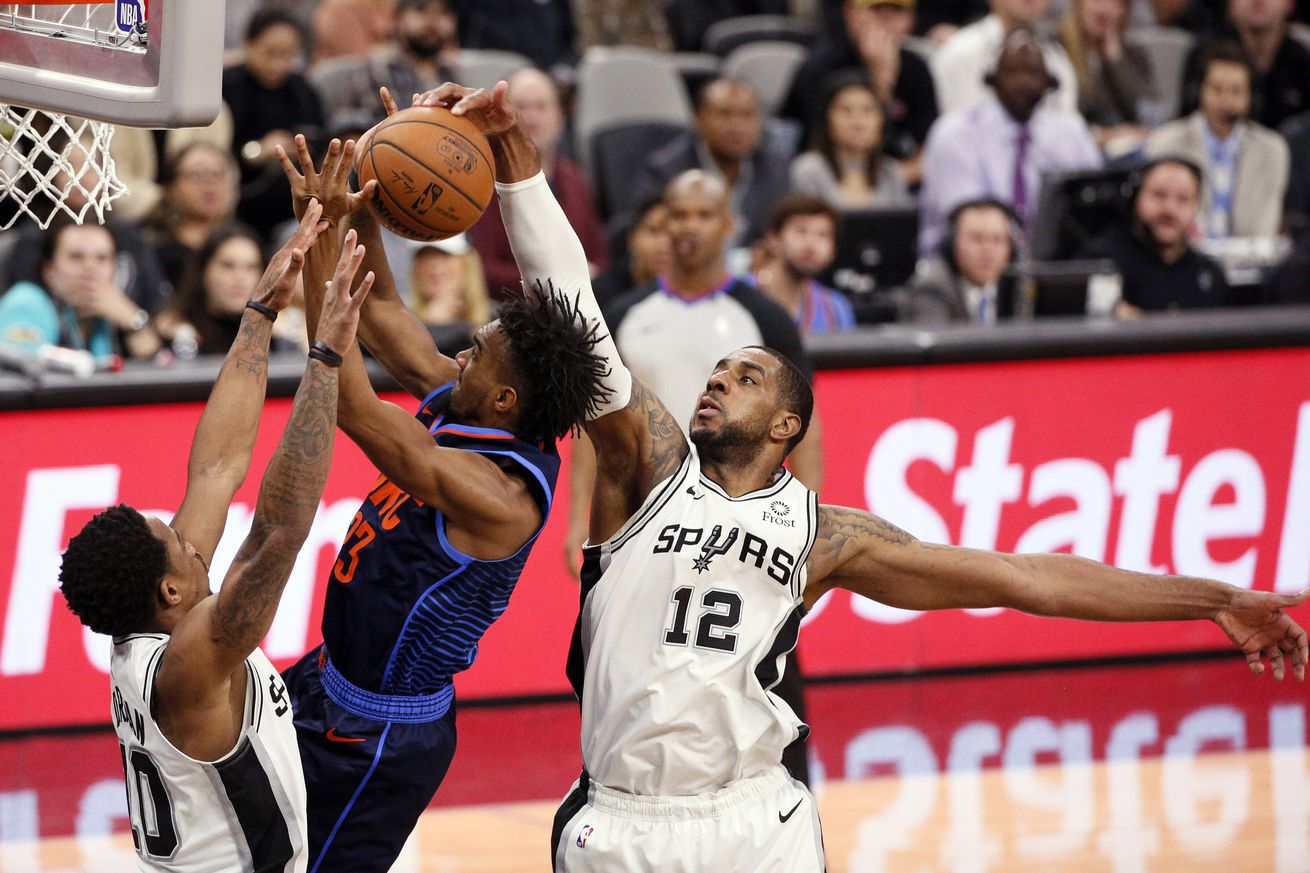 It’s something between a running joke and ornerous pet peeve among members of the local media that LaMarcus Aldridge is, like clockwork, the last player out of the showers on any given night. As his teammates clear out and their lockers shut one by one, like the lights of a slumberous apartment building, the 6’11” big man will remain somewhere out back, patiently cleaning up and receiving whatever recovery treatment he needs after a long night spent fighting for every rebound and inch of real estate on the left block.

It was well past midnight after the team’s 154-147 double overtime win over the Thunder when Aldridge was once again the last player to emerge, bedecked in a red jacket and matching shoes as he made his way in front of a weary group of reporters — a fashionably late arrival that felt more earned than ever.

Aldridge scored a career-high 56 points in the victory, hitting 20-of-33 from the field and 16-of-16 from the free-throw line and playing a season-high 49 minutes just one day after the team’s disappointing loss in Memphis. The six-time All-Star carried the Spurs past the finish line, netting 26 of his points in the fourth quarter and two extra periods through his usual diet of usual stepbacks, turnarounds, pick-and-pops and flashes to the rim. It was the kind of offensive explosion you might not expect to see anymore — all grit and craft and all done inside the arc.

As soon as the final horn sounded, Aldridge didn’t hide his sentimental side, racing to a referee to claim the game ball, which he plans to display in a trophy case in his home in Dallas to commemorate his first career 50-point game. It was a banner night for him, to be sure, but the workmanlike effort was par for the course if you ask his coach and teammates:

“He’s been a beast all year long,” said Gregg Popovich. “He anchors us on both ends of the floor. He did it last year and he’s doing it this year, too. He’s been fantastic and obviously he had a great night.”

“To watch him do what he does and be able to hand different types of defense that’s thrown at him, you catch yourself just watching him go to work. For him to step up night in and night out, it’s obviously huge. You’re just in awe sometimes at just seeing him do what he does best, whether it’s on the block or if it’s knocking down shots, free throws, clutch free throws. And then getting it done on the defensive end, as well, and being able to protect the rim like that at some stages is huge for us.”

While Aldridge took home the game ball, there was no shortage of other stories that — on any other night — would’ve been the lede. Consider:

That’s without noting the feats it took on the Thunder side to push the Spurs to the brink. Russell Westbrook was nigh-unstoppable from getting to the rim, ultimately putting together a triple double that jumps off the page even given his standards: 24 points, 24 assists, and 13 rebounds. Those 24 dimes don’t account for the handful of Kobe assists he generated by drawing a crowd in the paint and allowing teammates like Steven Adams and Jerami Grant cleanly swoop in for the easy putback. Westbrook’s backcourt teammate, Terrance Ferguson, had his own career night, knocking down 7 of 10 shots from beyond the arc and playing a big role in the Thunder clawing back in the fourth quarter and forcing extra time, while Steven Adams came back from an ankle injury to finish with 19 and 7.

Pop noted OKC’s strong play and, true to his nature, framed the win with the kind of sobering perspective necessary to keep his team grounded moving forward:

“This is one of those things where people will say we won the game and they lost the game, or we had more energy, or we did this, or we did that, but you know that’s not true. Both teams competed as best they possibly could. It was a great game to be a part of.”

Mills on just being a part of it all

“It seems like there’s a lot of historic moments tonight. You just kind of pinch yourself to realize how lucky you are to be involved in games like that. To be able to play in it, you know the back and forth, the battles, how tough everyone played, big shots, big free throws, big defensive plays, it was definitely fun to be involved in that.”

“These are the types of games that are gonna shape who we are and gonna pay off down the road and for the long road. If this is just a small sample of who we are and… what we’re gonna hang our hat on, this is a great start.”

The Spurs’ star guard had an off game for a second night in a row, nearing a triple double at 16, 11 and 8 but taking 22 field-goal attempts in the process. After getting two cracks at game-winning buckets at the end of regulation and OT and coming up empty-handed both times, DeRozan’s game-defining play ended up being a foul committed while trying to fight through a Steven Adams screen and contest a Paul George three-pointer that would’ve closed the Spurs’ lead to three in the final minute of double OT. While it seemed like the foul was going to reward George with the basket and additional free throw, the officials ended up deeming it before the shot was released, nullifying the basket and instead sending Adams to the line.

Let’s do this all again on Saturday

That’s when these same two teams meet again, this time in OKC.