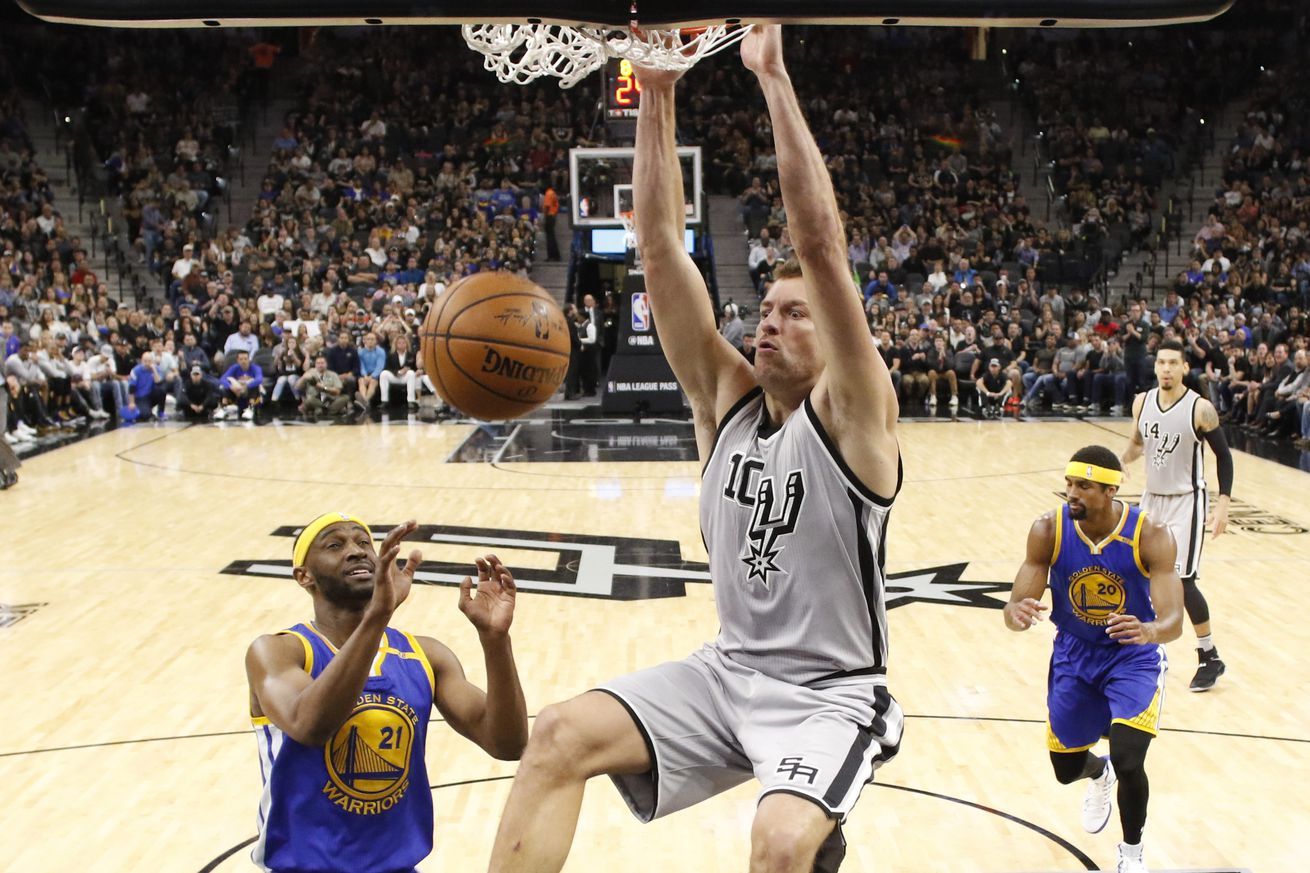 San Antonio now owns the tie-breaker and is a half-game out of the number-one seed.

With the news of LaMarcus Aldridge’s health slowly settling over Spurs Nation like a cold, stinky fog, we were reminded that there are things much bigger than basketball going on in players’ lives. Which is important, because if you were tuning into tonight’s nationally televised game hoping for compelling, playoff-level basketball, you would’ve come away a tad disappointed.

Still, despite missing three starters and turning the ball over 18 times, the Spurs’ reserves proved more than enough to handle Golden State, who was without Kevin Durant, Stephen Curry, Klay Thompson, Andre Iguodala and Draymond Green, winning 107-85 and holding the visitors to their lowest point total of the season. With the victory, there’s just a half-game separating second-place San Antonio (51-14) and first-place Golden State (52-14).

Resting his four super starters on a SEGABABA following a loss at Minnesota, Steve Kerr surrounded quasi-All-Star Zaza Pachulia with Matt Barnes, Shaun Livingston, Kevon Looney and Patrick McCaw to start the game, a five-man group that had never played a minute together before Saturday. Unsurprisingly those dudes had trouble establishing much chemistry in this one, and the Warriors found themselves down double digits by the end of the first quarter.

To their credit, the Spurs didn’t let Kerr’s decision affect their effort or focus, seizing control of the game through their ball movement and some hot shooting from deep. The team hit 11 threes by half-time (8 in the second quarter), with Patty Mills (5-of-6) and Davis Bertans (3-of-4) leading the charge, and didn’t look back from there.

Mills was terrific stepping into the starting lineup, finishing with a team-high 21 points and a +21 plus-minus. He did most of his damage in the first half, which allowed Pop to give more time to Austin staple Bryn Forbes, who scored a career-high 8 points.

The game could’ve been even more lopsided if it wasn’t for a career night from Ian Clark, who dropped 36 points on 15-of-21 shooting. Not bad for an undrafted guy who’s been averaging just over 13 minutes per game.

Inevitably, in the light of Kerr’s last-minute decision to rest his stars, the broadcast frequently turned its attention to the issue of teams sitting players. You’ve likely heard both sides of the debate before, and despite the league’s attempts to address the rigors of the 82-game schedule, the problem won’t likely go away without further measures. In this case, the Warriors were at the end of a two-week stretch having played seven of eight games on the road, and it’s safe to assume that making this call against a team hot on their heels in the standings was a difficult but understandable consolation to make.

At least the Spurs fans in the AT&T Center who paid top dollar for the game saw their team come away with the W — a W that counts just as much in the standings as the next (and final) meeting between the two teams in a few weeks. And since SA took the season opener in Oracle back in October, they also own the all-important tie-breaker in the season series.

Also, Kawhi Leonard, who missed this one while still in concussion protocol, appears to be on the mend and could be returning soon:

Patty Mills said Kawhi Leonard “seems alright” when you talk to him. Pop is hopeful he can go on Monday.

All eyes now turn to Monday, not only since that’s when the Spurs play next (at home against Atlanta), but because it’s when the team expects more conclusive news on Aldridge’s heart. Here’s hoping for the best.