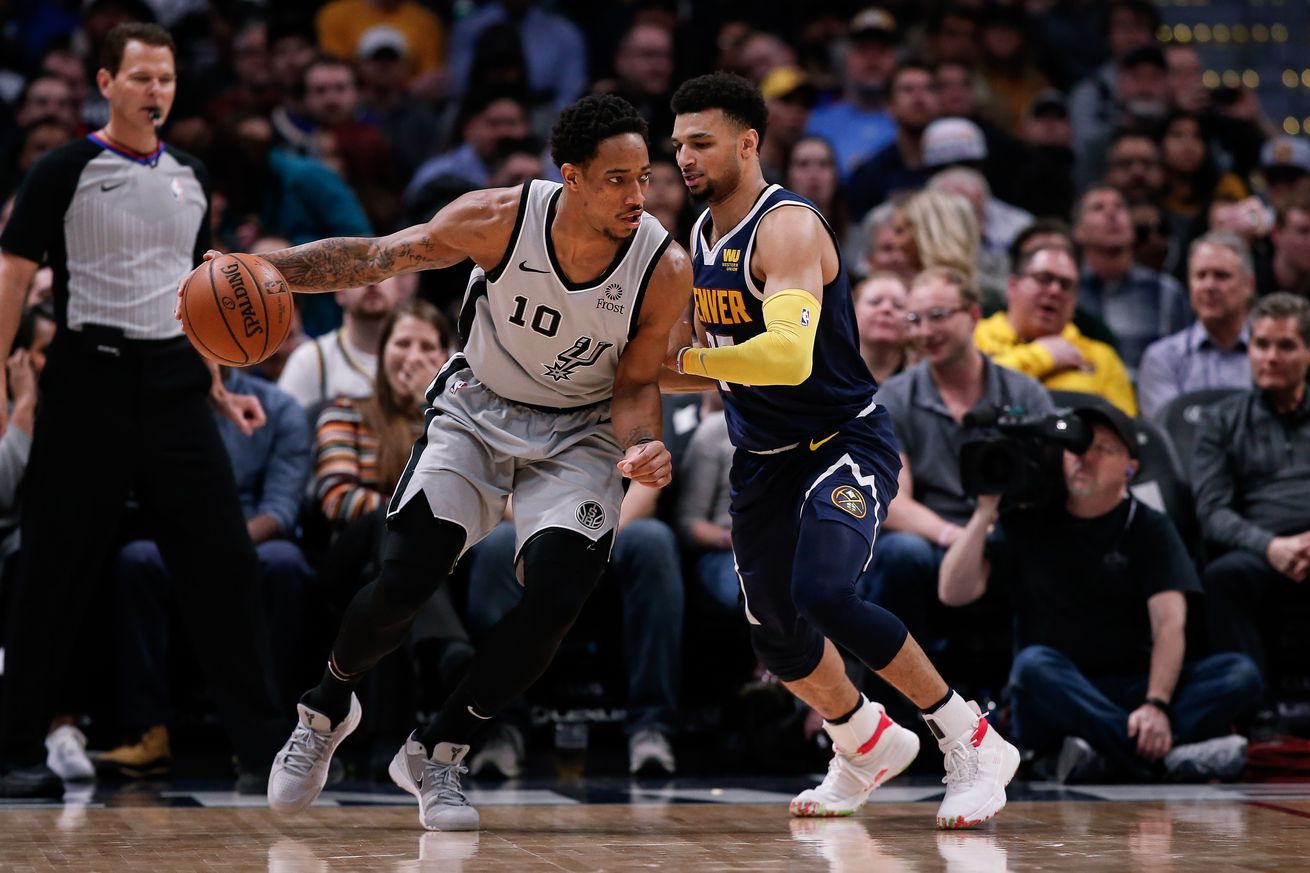 Coach Pop set an NBA record for the quickest ejection of an NBA coach, so there’s that.

Oh, and in case your clock was slow by a couple minutes and you showed up late, this happened 63 seconds into the game:

Not only was this the quickest ejection of a head coach in NBA history, but it might have been the least demonstrative (by both coach and official). There’s no doubt that the referees are starting to feel targeted, and if you watch a lot of basketball games — especially in the Golden State area — they may have a point. Still, this ejection was weak, even by modern NBA standards. I want to be upset at Pop for getting ejected at the start of an important game against a potential playoff opponent, but I’m torn. He didn’t appear to do anything to actually warrant an ejection, but after the first tech, he should have given it a rest. Pop has now hit the locker room early in two out of the last three games.

Unofficially, this is the quickest ejection of an NBA head coach in history.

The record was previously held by Flip Saunders of the Wizards vs Celtics on Jan 2, 2012 (106 seconds)

I’m envious of Pop in a way. I kind of wish somebody had knocked on my door and told me I had been ejected from watching the game. But alas, here I am.

Though it may not feel like it due to the lack of energy and desperation shown by the Spurs’ players, the loss to the Nuggets is an important one. The Spurs are now 8th in the West, one game behind the Oklahoma City Thunder in the loss column. This is setting the Spurs up for another first round match-up against the Golden State Warriors, who just did unto the Nuggets what the Nuggets did unto the Spurs.

The Nuggets came into the game against the Spurs having had the worst field goal percentage in the NBA over the past five games. The Spurs’ porous defense has been the cure to bad offense for most of the season, this time allowing the Nuggets to shoot 54% from the field. DeMar DeRozan, in particular, looked like he’d rather be doing anything than play defense. He looked lost all night, constantly overreacting to player movement, making incorrect defensive switches, or losing his man altogether. If you’re feeling brave, I urge you to replay the game and focus on the defensive side of the ball. Don’t say I didn’t warn you.

I believe the poor defense is going to get overshadowed somewhat by the poor shooting, particularly from the outside. That’s fair, as it took Lonnie Walker IV hitting 3 out of 5 from deep in garbage time just to bring the Spurs’ three-point percentage up to 18%. Yes, 18% is an outlier, but it is still representative of how the Spurs have been shooting from deep over the past few weeks. Can somebody please check on the whereabouts of one Chip Engelland?

I’m going to stick with my guns and say that the Nuggets are still the lesser of the three evils when compared to the Warriors and the Houston Rockets. If you’re a bottom seed you’re supposed to be an underdog, and that’s exactly what the Spurs are going to be come playoff time. I’m not going to overreact to one bad night on a SEGABABA. The Spurs didn’t shoot poorly because of elite defense. The Spurs just missed a ton of open looks and lacked any fight to try and overcome their misfires. If that happens in the playoffs, the Spurs are going to lose regardless of the opponent.

I genuinely don’t care if it was during garbage time, Walker IV showed off his complete offensive game tonight. He showed off his speed in the open court.

Lonnie showing off the speed pic.twitter.com/G89HJ6OHNx

His touch from outside.

I know he didn’t make it, but look at the bounce from Lonnie Walker pic.twitter.com/X03s4zKWIg

The reaction that Gary Harris makes in the background is the exact reaction I was making from my couch. I hope his time to shine is next season. I’m ready for it.

The Spurs missed an opportunity to get within one game of the Los Angeles Clippers, who got blown out at home against the red hot Rockets. As a result, the Spurs are one game behind the Thunder for 7th and two games behind the Clippers for 6th. The Spurs own the tiebreaker against both teams, but that won’t matter if they don’t win out.

The Warriors seem to have locked up 1st in the West. The Nuggets still have to play the Blazers twice and the Jazz once, so their two game lead over the Blazers and Rockets could be in jeopardy.

There’s still some movement that can take place at the bottom of the standings over the final week of the regular season, but it’s looking like 7th seed is best-case scenario for the Spurs.