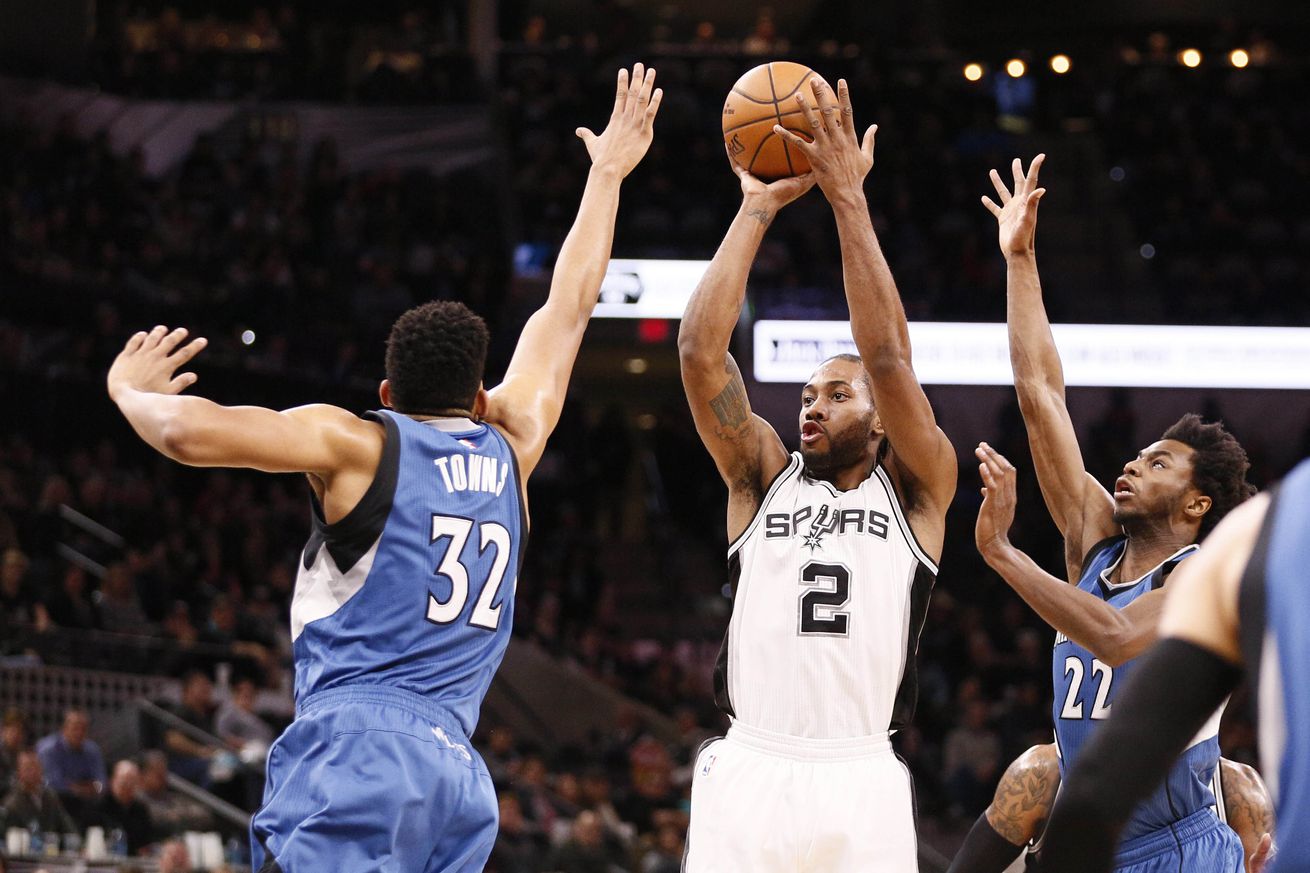 Kawhi Leonard, LaMarcus Aldridge, and Karl-Anthony Towns put on a show in the second half on Tuesday night. What would seven games of this look like?

Confession time: I’ve always been kind of a closet Minnesota Timberwolves sympathizer. Of all the expansion franchises which came into the league in the late ’80s to mid ’90s, they felt the least like a marketing exercise. Minneapolis is underrated as a city, and while it will never be a destination like Miami or Orlando, placing a team there never felt to me like a calculated infiltration of a fertile foreign market like the NBA’s expansion into Toronto and Vancouver.

So basketball in Minnesota was more of a good-faith effort. Even their uniforms were relatively muted in the era of flaming basketballs, stars and pinstripes, purple cartoon dinosaurs and flying insects. I suppose a Spurs fan is honor-bound to deplore Kevin Garnett, but I was eternally bummed that his T-Wolves couldn’t do away with the Lakers in 2004, or that he only won a title once he left the Twin Cities for Boston in Summer 2007. Ten years later, the franchise sports a bevy of high lottery picks, including a next-Kobe candidate and the reigning (unanimous) Rookie of the Year, along with a top-tier coach in Tom Thibodeau. If I ever wake up and find out my 23 years of Spurs fandom was nothing but a really nice dream, I’m going out and buying a Karl-Anthony Towns jersey. I might anyway.

Between the semi-annual first round thrashings the Spurs gave the Wolves in the early Duncan years and the nine consecutive regular-season wins they’ve racked up during the Ricky Rubio years, it can be easy still to see MINN on the schedule and consider the result a foregone conclusion.

In SA’s 122-114 win Tuesday night, Minny flashed just enough athletic potential to put a scare into a Spurs team still recovering from the loss in Mexico City on Saturday. Most of the Wolves’ first half success, in which they took as much as an eight point lead and put up 71 points on the home team, was predicated on their 28 free throws (eight more than the Spurs give up per game), Rubio’s hot shooting (he shoots 41% in Minnesota’s wins this season), and Shabazz Muhammad showing former teammate Kyle Anderson what it’s like to not be chained to the bench all the time. In other words, Minnesota’s halftime lead was about as fluky as a potential basketball dynasty in Minnesota.

Not that the Spurs were doing themselves any favors. On many defensive possessions, they looked just as young and inexperienced as the visitors. After starting 4 for 4 on shots from beyond the arc, the team spent the first three quarters of the game looking winded and uncertain, shorting shots and lagging on rotations. Pau Gasol played early, made a nifty pass or two, missed a couple of free throws, then gave way to Dewayne Dedmond for (how to put this kindly?) defensive purposes.

(I mentioned the free throws. What is it about Ken Mauer-officiated games that causes them to last longer than a Midwestern winter? There was a stretch halfway through the second quarter when the Spurs had more fouls than assists. About that time, I counted six straight possessions in which a man in a grey shirt raised his fist, halting play so that more free throws could be taken. This was Hack-a-Shaq without the strategic angle. It was a Raiders-Steelers game on a basketball court.)

Thankfully, even a near-endless string of free throws couldn’t hold back this much young talent for long. Kawhi Leonard (in a fourth straight 30+ point effort) stole Andrew Wiggins’ lunch for a pick-six, Towns started hitting those terrifying quasi-set-shot three pointers in addition to his terrifying work around the rim, and Zach LaVine threw down a lob that made even rubberman Dedmon take notice. With Gasol out of the way for most of the night, 31 year old LaMarcus Aldridge decided he was done playing preschool and began taking it to Towns and Gorgui Dieng in the low post. He finished second to Kawhi in scoring with 29 points and was instrumental, along with Leonard, Dedmon, David Lee, and Patty Mills, in the 15-0 run which spanned the third and fourth quarters and ultimately gave the Spurs the comeback victory.

The Duncan-KG years are over, but Spurs-Wolves is still a game of pickup ball between brothers, played out in a suburban driveway with a faded fiberglass hoop above the garage door. The Spurs are the older brother, having just returned home from college, full of worldly wisdom, a steady girlfriend, and a three inch height advantage. The Wolves are the younger brother, eager and determined, but still poking extra holes in their belt and tripping over their size 11s. In the last battle, the T-Wolves got out to a double-digit lead in Minneapolis before the Spurs came storming back behind Kawhi’s 31 points. Though Towns and Co. never got out to a big lead in this game, you could see the signs of concern for a Spurs team which had just gotten home from a hard loss in Mexico which seemingly left them with more questions than answers.

Last night, the Spurs caught a brief glimpse of little brother flashing his best game. Though there’s still a gap in maturity and expertise (as seen in the Spurs’ 7 turnovers versus the T-Wolves’ 18), the margin for error is shrinking against the Towns-led Timberwolves. Last night, little brother fought hard, threw down dunks and jammed fingers. What could he do in a playoff series? With Minny currently sitting well below .500, we’ll likely have to wait at least one more year to find out. But with Kawhi vs. Wiggins and LMA vs. KAT, these promise to be the best days of the Spurs-Wolves rivalry, which is finally beginning to thaw after a long winter.

Tweets of the Night

Quite a compliment from Coach Thibs on Kawhi Leonard: pic.twitter.com/HlmwlmeukE

Kawhi on hand injury: “It got jammed up a little bit going over a screen, but it’s OK. I’m going to keep pushing & get some treatment.”

Manu absorbs the contact and sinks the floater and one. #StillManu pic.twitter.com/eTd6W5ItAR

Kawhi on chemistry with Aldridge… overcame MIN doubles, scored 31 of #Spurs 55 pts in the 2nd half.. pic.twitter.com/ICBYKk5YVi

Kawhi with the rebound, the push, and the assist to LMA for th dunk. pic.twitter.com/k5lEblsHKZ

Love the next step in the evolution of Mills’ shooting. First few seasons, couldn’t hit water if he wasn’t perfectly balanced.

Early last season I wrote about Wiggins-Kawhi being a budding West rivalry … if Wiggins ever gets as good as Kawhi, Minny wins a title.

Kawhi goes coast-to-coast for the dunk.

He’s up to 32 PTS on League Pass. pic.twitter.com/dOmpYAjEqD