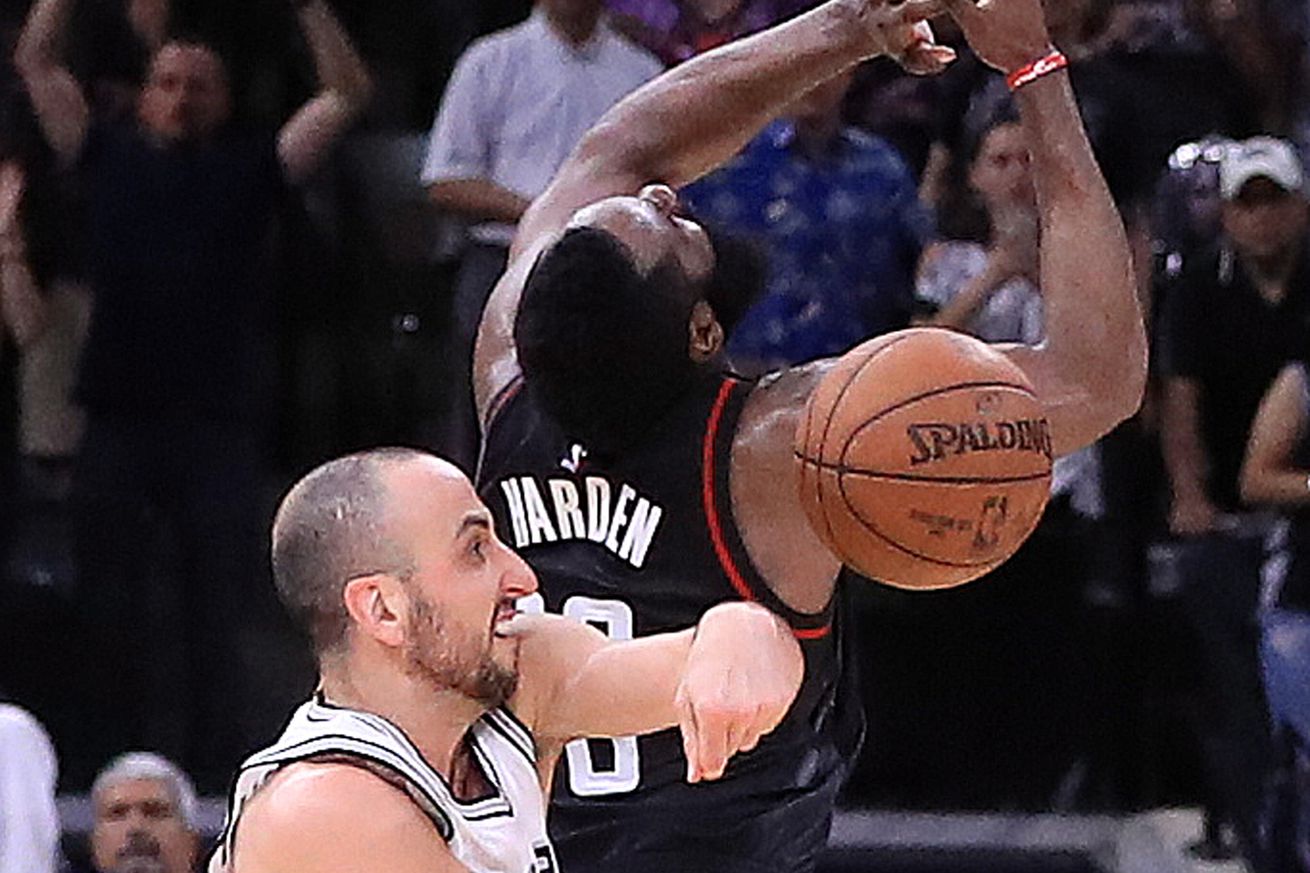 The Spurs managed to pull out a huge win despite shooting poorly, giving the Rockets 48 threes and losing their best player down the stretch.

Not only did we finally get 48 minutes of competitive basketball for the first time in this series, we got 53. And the Spurs came out on top in an overtime period that didn’t see a second of play from Kawhi Leonard, out nursing an ankle that was tweaked in the third quarter. Kawhi didn’t see the floor in the last eight minutes of the game.

While that’s great for fans of San Antonio in the moment, the injury to Kawhi’s ankle is a concern going forward. But on Tuesday night the team stepped up without their best player late in the game with a semi-vintage performance from Manu Ginobili and clutch play from Danny Green and Jonathon Simmons.

The game was tight the whole way through with 14 lead changes and six ties and neither team was able to take a double-digit lead.

The Spurs didn’t turn the ball over during the first quarter which helped them take a three-point lead going into the second quarter despite the Rockets shooting 48% from the field and 50% from deep (getting up 12 attempts in the quarter) while putting up 29 points. Patty Mills got his first playoff start, after Dejounte Murray started games 3 and 4 in place of the injured Tony Parker, and start strong he did with eight points in the first on 3-of-4 from the field.

Have a game, bala, have a game! pic.twitter.com/xzcawVO4wX

Patty played well the whole game and tied his career playoff-high with 20 points, proving Gregg Popovich’s decision to give him the start as the right call. He shot under 50%, going 7-for-16 , but drilled five triples along the way. That’s Morey Manu-ball right there. He tied Manu Ginobili, who was great in his second game 5 of the season, with a game-high plus-eight.

The second quarter wasn’t particularly good for San Antonio but they did turn the ball over only once. And despite hitting just 10 of their 25 shots they limited the Rockets to just seven three-point attempts. The Rockets shot 61% for the period and Houston won the quarter 31-26 which obviously isn’t what the Spurs want, but it wasn’t a disaster for SA when it could have easily been Houston by 10 going into the second half.

Manu Ginobili did do this, which was worth the price of admission on its own. Nothing gets the home crowd going like a Gino jam.

Manu proves you can do anything when you b̶e̶l̶i̶e̶v̶e̶ ̶i̶n̶ ̶y̶o̶u̶r̶s̶e̶l̶f̶ are being guarded by James Hardenpic.twitter.com/fRhh87Bl6g

James Harden ate the Spurs up in the first half, dropping 23 points on 13 shots and notching five dimes. He wasn’t so great in the second half and overtime, missing eight of his 11 shots and turning the ball over six times. Perhaps the Rockets’ seven-man rotation had something to do with that. Harden seemed tired down the stretch and three of his nine turnovers occurred in overtime. Some credit must be given to Simmons with an outstanding defensive effort there, making it tough on Harden.

After a very slow start for the Spurs offense in the third quarter, scoring just five points in the first five minutes, the home team came alive and finished the quarter with 28 points, which for you non-math whizzes out there is 23 points in seven minutes. Despite the Rockets grabbing six of their nine offensive rebounds in the quarter they lost the period 25-28, missing 10 threes and 17 of their 27 shots overall.

It helped the Spurs’ cause when at the end of the third Danny Green made his third three of the game to give the Spurs a one-point lead heading into the deciding period.

The fourth quarter saw poor offense from both sides, the Spurs went 6-of-24 from the field while the Rockets went 5-for-14. San Antonio’s size became a factor with the Rockets being outrebounded. The Spurs secured five offensive rebounds in the quarter while Houston was bageled on second chance opportunities.

The pace of the fourth and overtime favored the Spurs, clocking in at 81 possessions per 48 minutes in the fourth and 88 pp/48 in OT. In OT both team’s offense was again poor, combining for 4-of-13 from the field. Houston looked to James Harden to make it happen for them on every possession but he looked exhausted and his play reflected that, going 0-for-3 from the field and turning the ball over three times.

Danny Green was incredible in OT, scoring seven of the Spurs’ nine points, the last seven they would score, knocking down a three, driving and finishing an and-one with Harden defending him to put the Spurs up 109-107 before securing a huge board with 16 seconds left. Houston fouled Green and he split a pair at the line to give the Spurs their 110-107 lead which would hold. Then 39-year old Manu put the game away with one more legendary postseason play, a block on a Harden three. What instincts/decision making from the Spurs’ last-standing member of the Big-Three!

Another look at the game-securing block.

After the game Manu said it didn’t feel like a big game and that he “guessed” expectations were lower. Maybe he was right about the latter, but his Game 5 showing was not just big, it was huge for SA.

WAS MANU GONNA LET HARDEN GET THAT SHOT OFF? pic.twitter.com/ggAS1YAN0f

Pop Popped when asked if it was hard to balance rotations against Houston’s small ball.

“Does that animal do what he does in the woods?” pic.twitter.com/0E5IxJLuJM

Without their superstud down the stretch the Spurs found a way to pull out a great win. In a postseason that has seen a ton of amazing individual play from the silver and black featuring Kawhi, a pivotal game 5 was won in Spursian fashion. The team got the win. The number on the whiteboard in the Spurs locker room now reads 9.

Call it what you want… @manuginobili came up big tonight! pic.twitter.com/LtnSPd7EMm

The Spurs get a chance to close the series out with a game 6 win in Houston on Thursday night. It’s another early start, 7 p.m. Spurs time, and can be seen on ESPN. If a game 7 is needed it will be on Sunday at 2:30 Spurs time and will be on ABC.