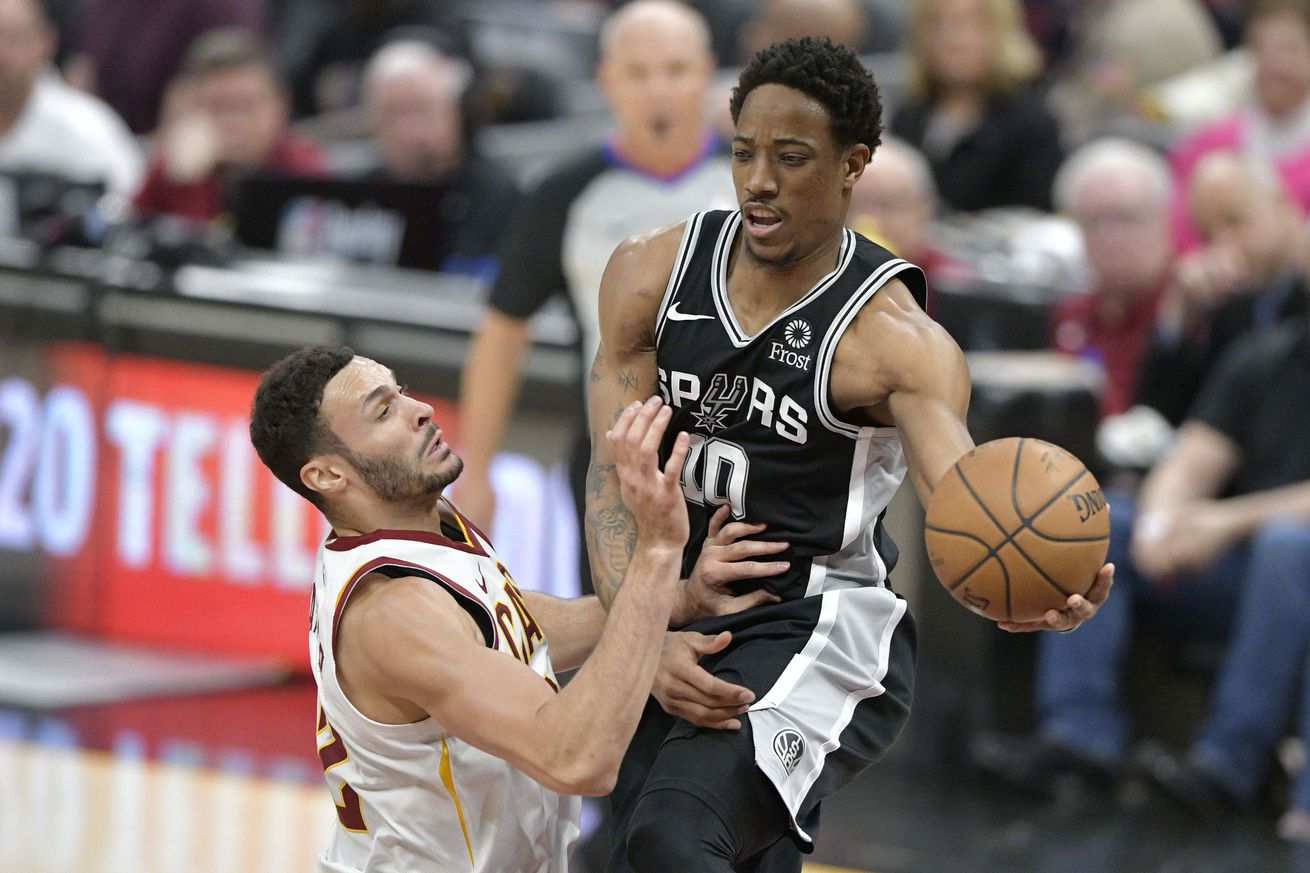 The Spurs handled two out of three road games to close out their away schedule.

In the last full week of the regular season, playoff positioning was extremely fluid and the Spurs are fighting to get the playoff position that doesn’t get them the Golden State Warriors. The Silver and Black started the week in 7th, but a loss to the Denver Nuggets (a team many in Spurs-land would like to see in the playoffs) dropped us down to 8th. Two Spurs wins and a loss by the Los Angeles Clippers bumped the team up to 6th. You need a degree in tie-breakers to understand all the possible scenarios, so thank goodness we have someone on that daily. (Thanks, Brandon Meiners!) Gregg Popovich appeared to have his own contest in mind – how many games could he get ejected from (versus the Kings and the Nuggets).

Week 25 – Fighting for Position: The Spurs came from behind to beat the Atlanta Hawks in a game that saw the guards excel. Derrick White, thankfully, came out of the mini-slump he was in to be the facilitator, scorer and defender he was during the amazing March stretch. But the week had more in store for the Spurs. A trip to mile-high Denver in what could possibly be a first round preview did not turn out how Spurs fans would have liked. The Nuggets, who were also playing on a back-to-back, came out punching. The Nuggs played with the intensity of a team that had just been thrashed by the defending champs and were looking to get some revenge on whoever they faced next – the Spurs. While the beating was hard enough, Pop also set a record that night – the fastest ejection in NBA history. But the guys in silver and black got back on track to win the next two road games in convincing fashion against the Washington Wizards and the Cleveland Cavaliers. In a season that many expected the Spurs to fail, they have won the same number of games as last year with one more to go.

The Spurs are trying to avoid going into the playoffs as the West’s No. 8, also known as the Warriors’ warm-up act. San Antonio will certainly be a significant underdog, putting the Spurs in jeopardy of not winning a playoff series in two straight years for the first time since 1991 and ‘92.

The Spurs are going to the playoffs for a 21st straight season. It’s been a season of transition (not in a literal sense — they rank 28th in fast break points) and maybe the most unique of those 21 seasons since they drafted Tim Duncan. Not only do they have a bottom-10 defense, but they’ve outscored their opponents by a total of just 30 points in 2,213 minutes with DeMar DeRozan and LaMarcus Aldridge on the floor together. They won five of their last eight road games, but with their 28-point loss in Denver on Wednesday, they go into the postseason with a 1-11 road record against the other West playoff teams. The one win was in L.A. on Dec. 29 and they’re 0-7 on the road, having allowed 120.9 points per 100 possessions over the seven games, against the four teams — Golden State, Denver, Houston and Portland — that currently hold the No. 1-4 seeds.

Best Rank: 9 (7) (Explanation added from previous section of article – “For teams who had their highest or lowest ranking in the preseason or the first week of the season, I put that in parentheses and noted a ranking from later in the season that better shows the margins that team operated in throughout this season.”

Best Case: They sneak into the six and face Portland. Then after that, they get Denver in the second round and get another upset victory to set up a matchup with the Rockets. And somehow, someway, DeMar DeRozan gets to the Finals, and Gregg Popovich makes us all think even more highly of him despite losing the championship round.

Worst Case: They lose Wednesday and then have to face the Warriors in the first round again, but this year the series ends in four.

Prediction: They get a matchup with the Nuggets or Trail Blazers and advance to the second round where the duos of either Houston or OKC are a little too much for DeRozan and Aldridge to overcome.

Will be updated when CBS Sports posts.

So with one more game to go, have the analysts gotten anything right this week? Are the Spurs trending in the right direction? Tell us what you think in the comments.