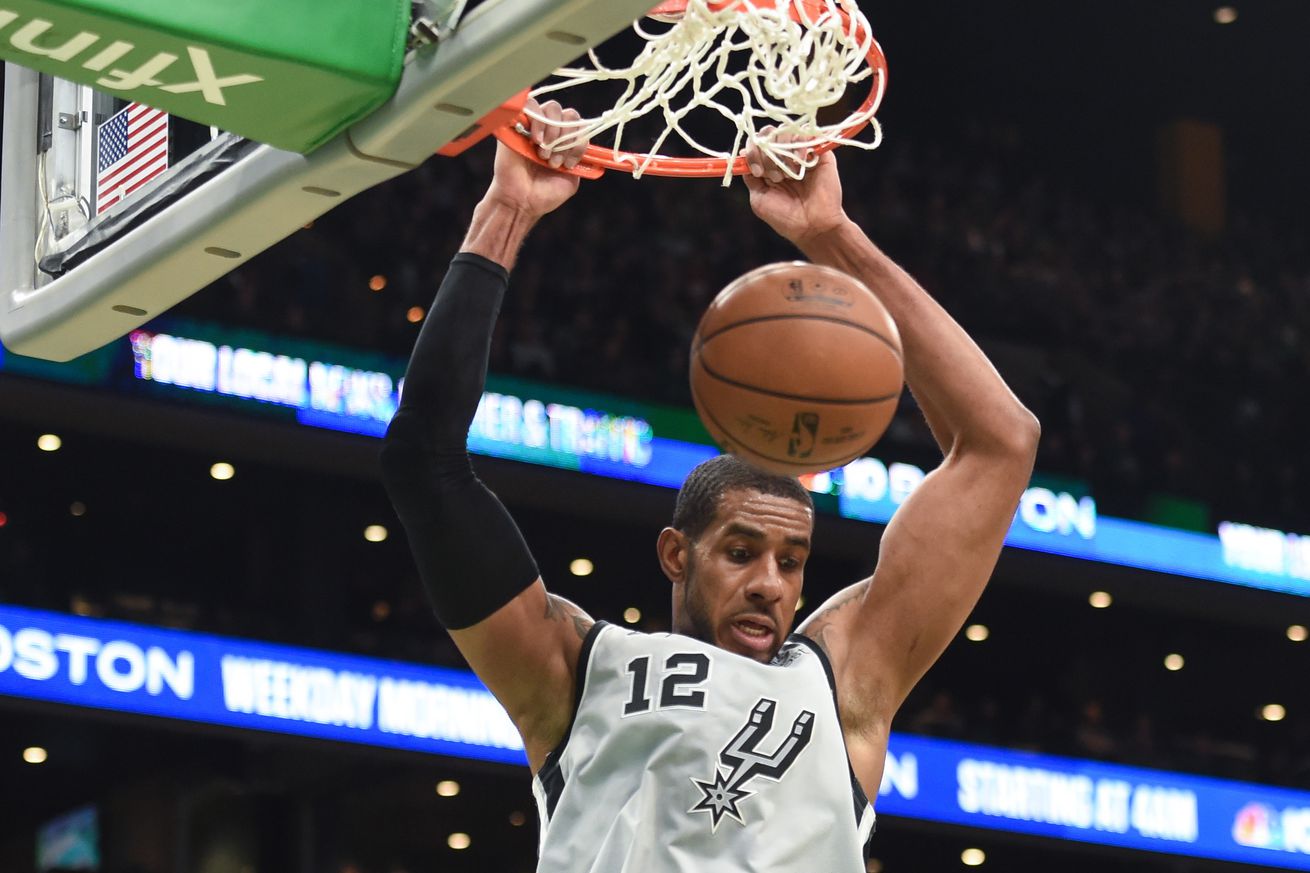 A good start and a good finish help get the taste of those two losses out of Spurs fans’ mouths.

Looks like it’s going to be a great week when the Spurs start off with a strong win over the defending champion Golden State Warriors, jump to 5th in the standings and guarantee a 22nd winning season. But the guys in silver and black played the next two games at times like they forgot who they were. Losses against the Miami Heat and the Houston Rockets had the Spurs dropping back down to 8th in the West and had Spurs fans worried. But the good guys righted the ship with a convincing win against the Boston Celtics in their own gym.

Week 23 – Trying to stay focused: The game against the Warriors offered Spurs fans a chance to believe that the defense was here to stay. Derrick White and Patty Mills harassed Steph Curry and Klay Thompson into a combined 4 of 22 in the first half. The guys on the court were talking and switching and scrambling all over the place – it was a sight to see. But the team must have expended too much energy because the next game against the Miami Heat was flat. Defensive errors, bad passes, and rushed shots doomed the Spurs in the last few minutes of the game. The team traveled to Houston hoping to regain some of their momentum, but instead, reverted to their old habit of falling behind early. A strong comeback brought them back from 19 down, but again, sloppy defense destroyed any chance they had of pulling it off. Yet, the week wasn’t quite over. The Spurs walked into the Celtics’ gym needing the win to maintain their playoff position, and they came through. Everyone played well for all 48 minutes, but LaMarcus Aldridge was on fire – scoring 48 points, 13 rebounds and 6 assists.

The Spurs are 35-8 when LaMarcus Aldridge scores at least 20 points and 8-1 when he scores 30. Hold him under 20? The Spurs are 7-22. He’s shooting 56.3 from the floor in wins and 44 percent in losses. Want to guess where playoff foes’ defensive game plans will focus?

The Spurs’ winning streak didn’t come to an end at the hands of the Warriors. The improved San Antonio defense held up against the champs on Monday. Instead, it was the Heat that put an end to the streak two nights later and James Harden that dropped 61 (the most points scored by a player against the Spurs under Gregg Popovich) on Friday. The Spurs did recover to win in Boston on Sunday (their first road win since Jan. 7 over a team currently in playoff position), still rank in the top five defensively since the All-Star break, and will play seven of their final eight games against teams that currently have losing records. They’re 28-10 (and 19-1 at home) when DeMar DeRozan has six or more assists, which he’s done in 11 of his last 12 games.

This one from Popovich was pretty good… told he looks like he’s still enjoying himself coaching, he said “I am.” … maybe this will cool the retirement questions #Spurs @TheAthleticNBA pic.twitter.com/dCfchirwjl

If Pop is having fun, we should all be having fun. And considering the Spurs have won 10 of their last 12, I’m fairly confident the players [are] enjoying themselves as well.

Temperature: Hotter than a steaming hot plate of breakfast tacos from Torres Taco Haven. Since the disastrous Rodeo Road Trip, the Spurs have gone 10-2, including doing something uncharacteristic on Sunday: Beating a good team (the Celtics) on the road. Remember how weird it was that the Spurs were playing very un-Spurs-ian defense all season? Well, over the past 12 games, the Spurs have ranked third in the NBA in defensive efficiency. LaMarcus Aldridge has averaged 24 and 9 during that stretch, and torched the Celtics for 48 points Sunday, but big men like Davis Bertans and Jakob Poeltl have been nearly as important, with on/off numbers that rank among the best on the team.

With the regular season just about over, do the analysts have it right? Tell us what you think in the comments, Pounders.