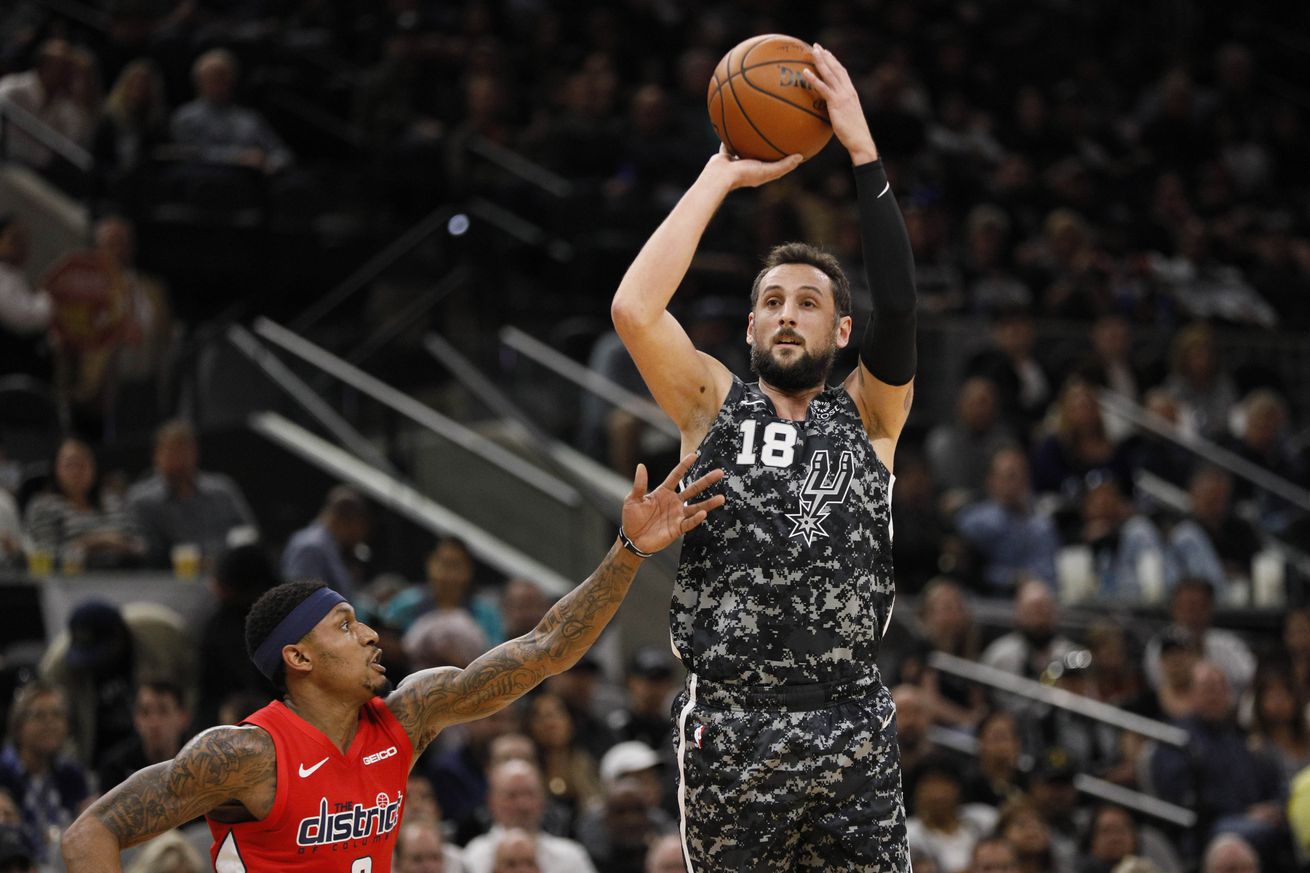 A slow start with a loss on the road eventually revved up to wins.

The Spurs’ short week started with two road games. After a disappointing loss last week against the Clippers at home, the Spurs continued the trend on the first game of their mini-road trip. As Spurs fans may have noticed, the silver and black has a bad habit that keeps popping up – starting slow while falling behind by double digits. But the Spurs continued the road trip with more energy to pull out a win against the short-handed Pelicans and kicked off a four game homestand with a win over the Wizards.

Week 15 – One down, Two up: There doesn’t seem to be rhyme nor reason for the Spurs to start some games with low energy and little focus. They started the game against the Philadelphia 76ers down by double digits in the first part of the first quarter. For the rest of the game, they picked up the intensity and managed to pull ahead, only to collapse in the final two minutes. For the second game of the road trip, the Spurs could have relaxed because the Pelicans were without Anthony Davis, but they came out firing and never really took the foot off the gas. Returning home for the SEGABABA contest against the Washington Wizards, it looked like the Spurs had fallen back into old habits, for exactly 16 seconds (that’s how long it took for Gregg Popovich to call the first timeout after the Good Guys missed defensive rotations and allowed a dunk). But while Pop had to occasionally remind them to keep up their fire and focus, the Spurs handed the Wizards their 19th loss in a row in San Antonio.

LaMarcus Aldridge has clearly established himself as San Antonio’s best All-Star candidate, having carried the Spurs in January while DeMar DeRozan struggled and dealt with nagging injuries. Aldridge is averaging 24.2 points per game on 56 percent shooting to lead the Spurs to an 8-5 record this month, while DeRozan has averaged 16.4 points on 41.8 shooting and missed three games.

The Spurs are 3-0 without DeMar DeRozan, having won a pair of weekend games without him by scoring 125 points per 100 possessions against New Orleans and Washington. DeRozan is dealing with knee soreness and has a January effective field goal percentage of just 41.8 percent, the sixth-worst mark among 144 players with at least 100 field goal attempts this month. But Derrick White has the second-best January effective field goal percentage (67.7 percent) among that same group of 144 players. White has seen his minutes climb steadily from 17.9 per game in Games 11-20 to 31.8 in Games 41-50, and better shooting has come with more minutes. He has shot 52 percent on non-restricted-area paint shots, the third-best mark among 159 players (and the best among non-centers, just ahead of teammate Rudy Gay) with at least 50 such attempts. The Spurs have three more home games before the annual rodeo trip begins next week.

I want to judge Gregg Popovich for taking DeMar DeRozan out for the last play in Philadelphia, but the logic behind “we didn’t want to go to overtime” so DeRozan stays on the bench when the team is trying to shoot a three is foolproof. Sure, maybe DeRozan could have been a really good decoy to set up one of the other guys for a three. But the Spurs just won two straight with DeRozan missing both so I’m just going to keep my mouth shut and avoid second-guessing Pop.

Single biggest question: How far can zigging take you when the rest of the NBA is zagging? Gregg Popovich is a genius, but the genius of his coaching job this season lies in its simplicity. The rest of the NBA is shooting more 3-pointers than ever before, but the Spurs rank last in the NBA in 3-point attempts and first in the mid-range attempts derided by the analytically-minded. Why? Because his best players are excellent mid-range shooters. Simple as that. He’s maximizing this team’s talent. But is the ceiling any higher than a first-round exit in the playoffs?

Can the Spurs break the habit of randomly starting games slow, falling behind and expending tons of energy trying to dig themselves out of it? Are the pundits on track? Tell us what you think in the comments.