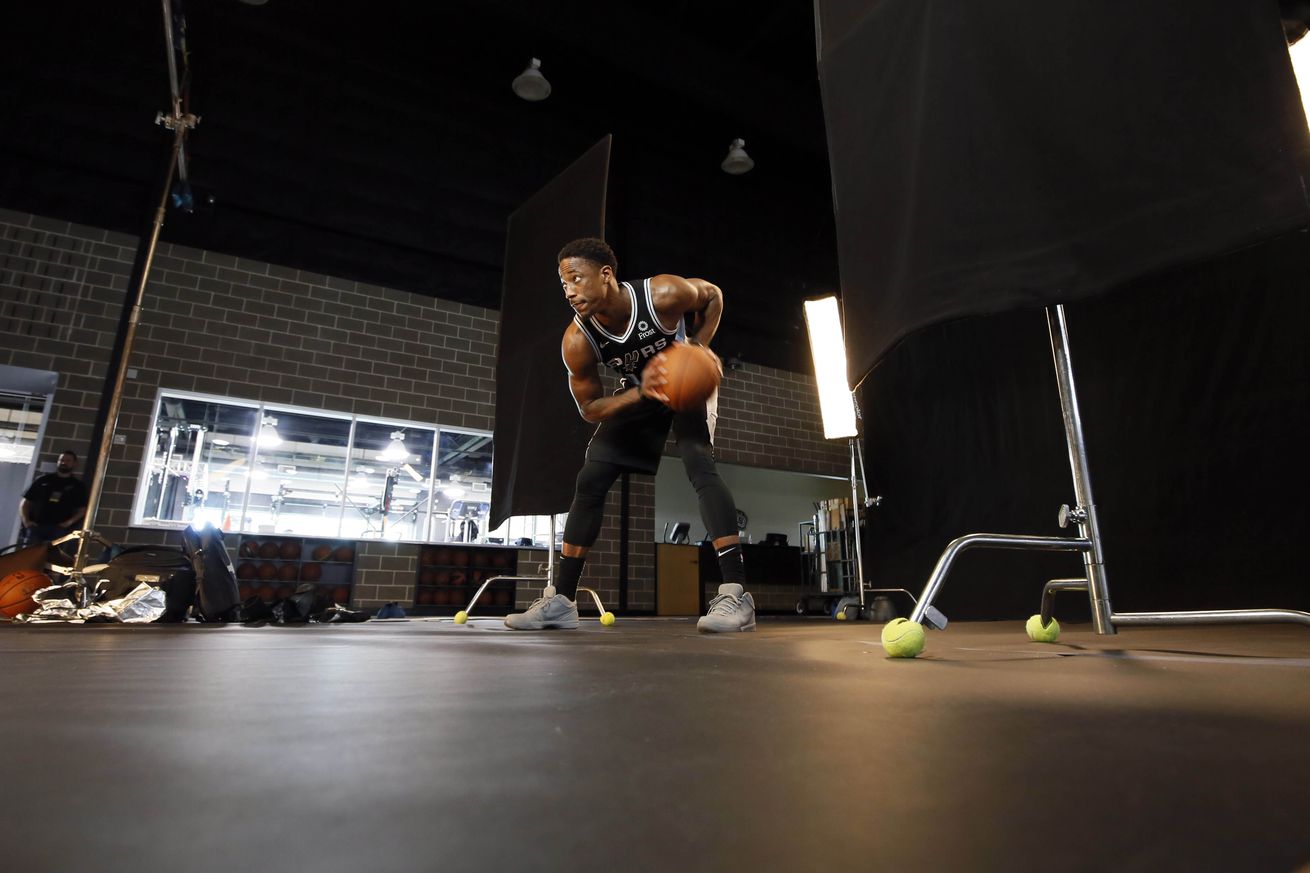 A recap of the stories and soundbytes from 2018-19 Spurs media day.

The past was ancient history if you go by the quotes that came out of Monday’s Spurs media day. Dejounte Murray said he was “glad” the Kawhi Leonard saga “was all over.” LaMarcus Aldridge refused to answer any questions about it and said he was “happy to turn the page.” New arrival DeMar DeRozan had his own injustices to shake off but, leaving behind his tweet from just a few days before, spoke of the upcoming season as “a new challenge” rather than as a chance for revenge.

Nevermind that some 1,500 miles away last season’s antagonist let out the day’s most hauntingly viral laugh — the 2018-19 season is underway, and the Spurs can move on from the weirdest year in modern franchise history.

Focusing on the now, DeRozan spoke of what it felt like to be in San Antonio:

“It feels great. It’s definitely an honor,” he said of . “I think every day that goes by, me being here, getting more comfortable. [There are] definitely gonna be countless things to go over. I just got back yesterday. Just to be able to get in the mix of everything — I’m looking forward to that… Going into my tenth year, [it’s like] the exciting part of the movie, so to speak.”

Here’s DeRozan on if he’s worried about him potential spacing issues with him and LaMarcus Aldridge:

“We’re gonna figure it out. When it comes to basketball, it’ll be figured out without a doubt. He’s great and dominant at what he does. You know, I remember a couple of years I used to be mad when I see that he shot more mid-range shots than me. We’ll figure it out.”

DeRozan was asked what Spurs fans could expect from Jakob Poeltl;

“Jakob? Hell of a player. One of the toughest big men I’ve ever played with. Agile. Runs the floor, protects the rim. Probably set one of the hardest screens that I’ve ever felt, especially for a young guy. His IQ for the game is definitely high. I think just being here, being under Pop, being in a new situation I think you’re definitely going to get to see him thrive at a high level.”

“You’re kind of one of the longest tenured Spurs left—” one reporter began, to which Aldridge responded:

“—which is crazy. Yeah, it feels weird. Things change a lot in this league and losing Manu is definitely tough because he’s been here so long and he knows Pop better than most. He knew how to guide guys who hadn’t been here. Now, without him, we’re kind of in the water by ourselves, but it’s fine. We still have some guys who have been here… We’ll be OK.”

On his style of leadership:

“Everyone leads in their own way. I’m never gonna be that rah-rah guy who’s always talking… I’m the guy that says something when it needs to be said, more of a lead by example type of guy. Of course with the young guys, I’ll have to be more vocal in practice and things like that, but for the most part things won’t change.”

On the unique challenges and adjustments for this season:

“Finding chemistry, you know a whole new team. Finding chemistry… Trying to see how certain guys play with other guys. Re-establishing our defensive mindset. Last year, even when our offense kind of sputtered our defense was always there for us. Trying to get that back and trying to get guys locked in on defense and letting the offense come to us. It’s different but I feel like… we’re more talented this year.”

On things, maybe, coming easier to the team season:

On the possibility of finishing out his career in San Antonio:

“For sure. I mean, I don’t have any reason why I wouldn’t stay here. I re-signed preseason last year – I think that showed that I was happy being here. As long as they want me, I’ll play.”

On his role on the team moving forward:

“I feel like I can be a leader. I’m ready for whatever role Pop wants to allow me to have.”

On what he learned from Tony Parker:

“I learned a lot from him. He’s the greatest point guard to ever put on a Spurs uniform… He’s a great dude, great player. It’s more than basketball to me. I tried to watch everything he did off the floor, how he carried himself. He was a pro, he was on time, never late. Always ready to go. And when it got to the on the court stuff, I just watched everything — how to be a Spur and how to handle Pop. You know, just little things like that. On the basketball end, obviously we’re two different players. I just tried to watch what he did good, what he did bad, and learn from it.”

On working out with assistant coach Chip Engelland this summer:

“We got to know each other a lot. Chip’s my guy. He just wants the best of me. He’s seen how hard I work… He’s a guy there willing to give me tips… We just tweaked a little bit of things, and it was a lot of reps, a lot of reps.”

On his drive to improve upon his already-great defense:

You can catch all of Monday’s interviews and more on Spurs.com.