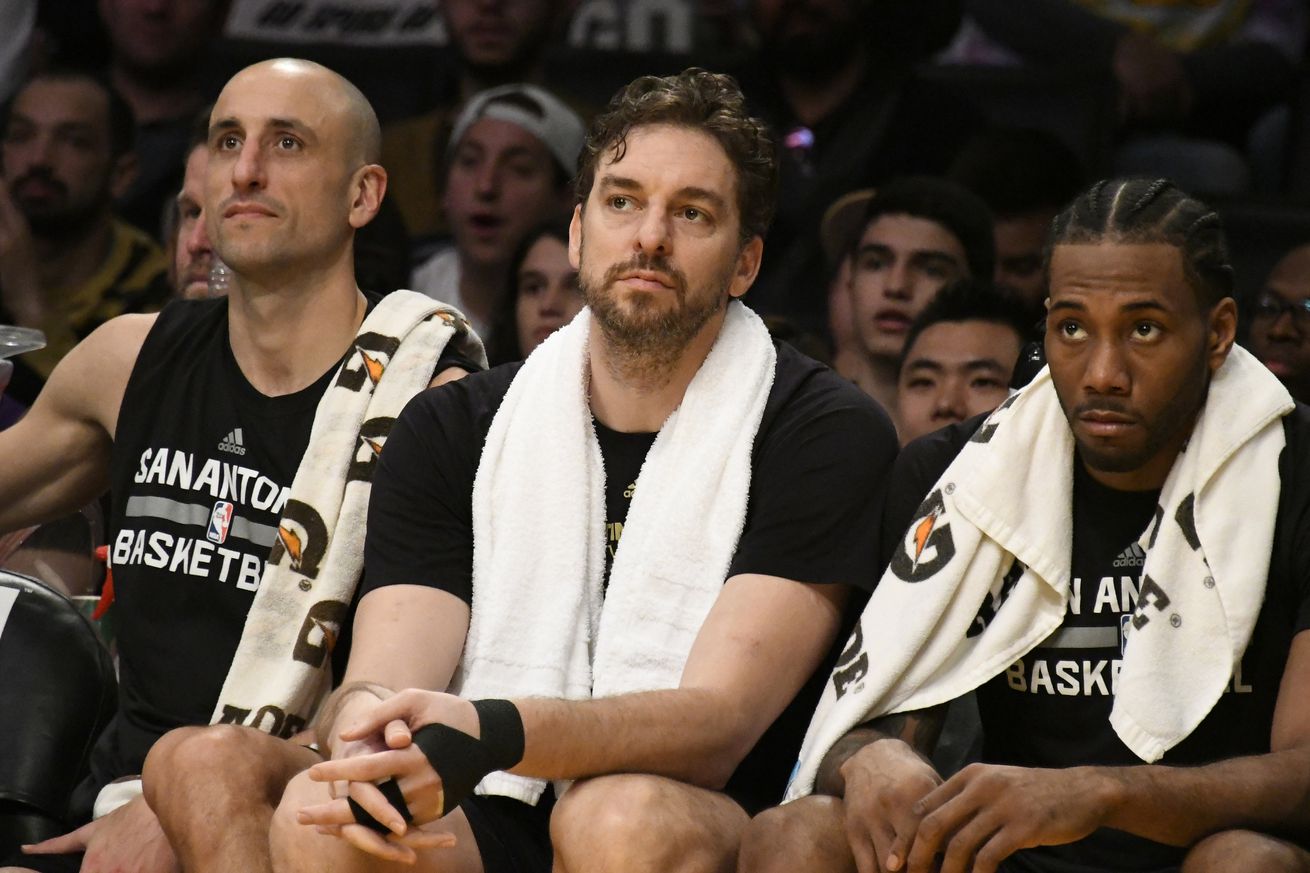 With 1:28 left in the third quarter of the San Antonio Spurs 119-98 drubbing of the Los Angeles Lakers, the Spurs ran an out of bounds play that is worth another look. The play featured a weave directly off the inbounds pass as well as a nasty back screen from 39-year-old Manu Ginobili to set up an eventual Manu 3-pointer. The two actions had something in common: screening to get open. Often times the screener will be wide open as defenses try to stop the ball handler, and the Spurs do a great job of recognizing this while keeping the ball moving.

Patty Mills takes the ball out with David Lee and Dewayne Dedmon at the high posts and Kawhi Leonard and Ginobili on the low blocks. Notice that Leonard is isolated on the strong side block, but Corey Brewer is denying that pass pretty well. Thus, Lee pops out and Mills inbounds the ball to him and quickly cuts towards him to receive a hand-off. This creates the same effect as a weave play, or dribble hand-off.

Jordan Clarkson, who’s guarding Mills, tries to go under the screen created by Lee during the exchange but runs into Larry Nance Jr., Lee’s defender, who is trying to follow Lee as he cuts towards the basket. Pause at the three second mark and you’ll see both Lee and Mills come wide open as Nance and Clarkson crash into each other. The collision is caused by the weave action.

While Mills and Lee are working the two-man game, Leonard, Dedmon and Ginobili all inch up towards the action to position themselves to screen. Dedmon bumps Clarkson, who’s chasing Mills after Lee’s screen. Julius Randle, Dedmon’s defender, sags off the non-shooting Dedmon to corral Mills until Clarkson can return. Although Clarkson and Randle recover to their original assignments, Mills is able to dribble all the way to the opposite wing and is not pressured when he makes the entry pass to Lee.

Before that pass, after the weave action, Lee cuts from the wing to the opposite low block by circling around the traffic. Nance, who’s behind, tries to cut through the middle of the pack to make up ground. He’s able to slip by Leonard but then gets absolutely trucked by Ginobili in the middle of the lane. It’s worth another look at the four second mark.

After getting decked, Nance has no chance to get back to Lee, who’s received a bounce pass from Mills in the short corner. Nance points towards the open Lee, signaling he needs a switch, but still takes two steps towards Lee almost as if he’s unsure the switch will come. Simultaneously, Ginobili fades to the weak side corner all alone. Ingram, Ginobili’s defender, switches onto Lee, but it takes him a couple of seconds and leaves Nance out of position as he moves towards Lee until seeing Ingram commit to the switch.

With the Lakers all bunched up, Lee takes one dribble spinning into the middle and sees Manu. Just as Lee begins to pass, Nance realizes Ginobili is his responsibility and sprints to close out, but it’s too late. Lee’s pass hits Manu right in his shot pocket and he quickly fires over the leaping Nance and knocks down the 3-pointer.

The shot gave the Spurs a 94-68 lead and the win improved the Spurs record to 45-13. This play highlighted the importance of moving into open space after a screen while defenders are scrambling to contain the ball. Ginobili did just that, and was rewarded with the open look.