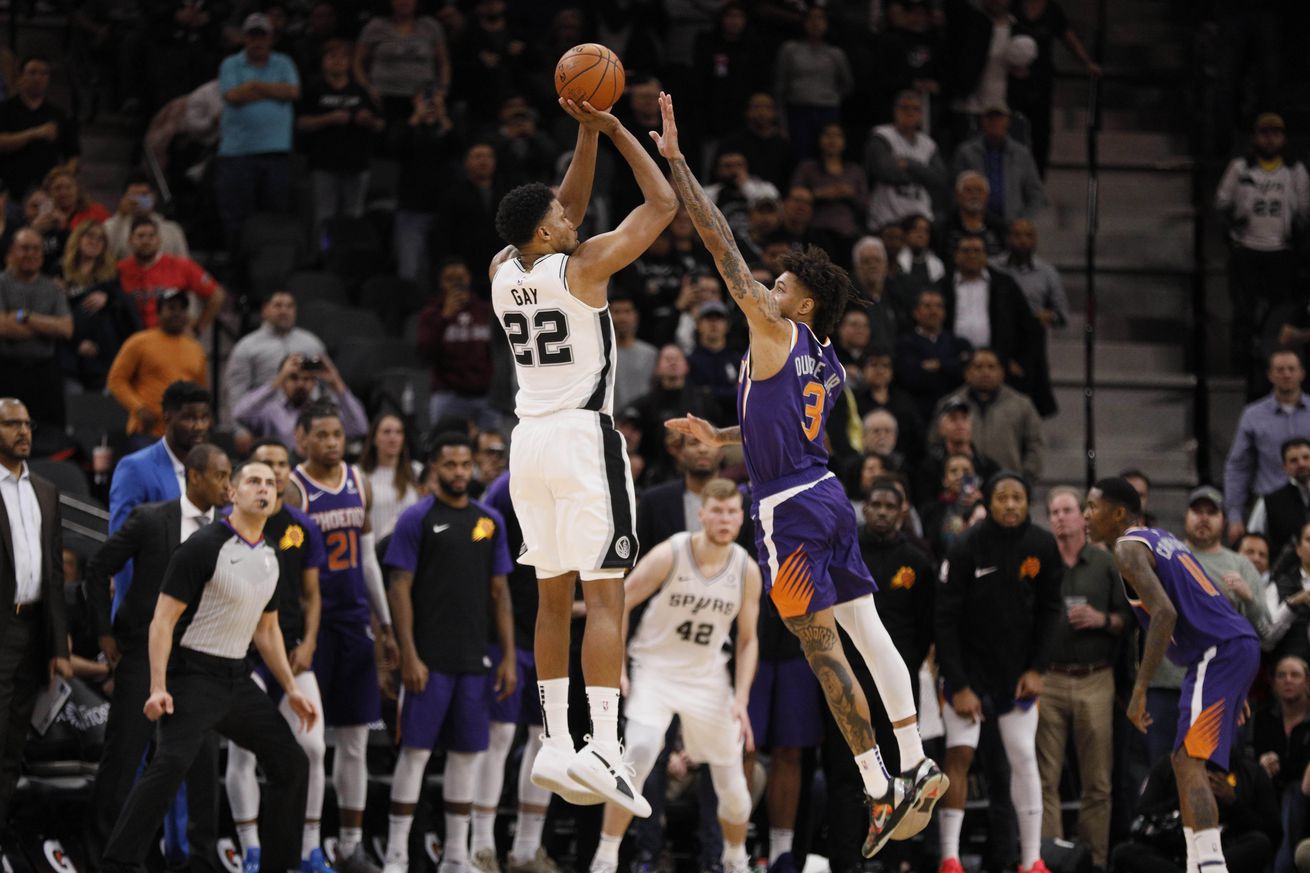 In a performance that left Gregg Popovich demonstrably unimpressed, the Spurs mustered just enough to top the conference cellar-dwelling Suns at home, courtesy of some Rudy Gay heroics.

There’s a word that Phoenix coach Igor Kokoškov is known to shout out to his young team to remind them to remain focused, “move the ball, pass and cut, set a screen,” not “stand and watch” and essentially revert to their better intuition during broken plays, as he said before Tuesday’s Spurs–Suns game.

Although there’s a more pointed, Pavlovian purpose to Kokoškov’s call to action, it doubled as the simple chorus that I kept coming back to on Tuesday while taking in a game that devolved to its most basic basketball nature — all the way to a thrilling but equally nonsensical conclusion.

Favored by double digits coming into the night, the Spurs mustered little in the way of defense to slow down the 11-win Suns, beginning with guard Devin Booker, who got to wherever he wanted on the floor and paced all scorers with 38 points on just 19 field-goal attempts. When it wasn’t Booker it was 38-year-old Jamal Crawford (22 points), rookie Mikal Bridges (17), or new arrival Kelly Oubre (15) — regardless, San Antonio’s erratic perimeter defense offered little resistance to dribble drives while remaining a step slow to close out on three-point shooters. They shot a cool 60% from the field as a team, largely undone by the 18 turnovers that the Spurs turned into 28 points, but overall played the type of intuitive, smart basketball their coach would’ve hoped to see.

In addition to the visitors’ miscues, the Spurs benefited from their size advantage inside with LaMarcus Aldridge (29 points), who anchored the offense and extended possessions with his work on the offensive glass (8 offensive rebounds, 14 total), while the usual cast of outside shooters did their damage from beyond the arc. It collectively made for a rudderless game that spiraled drunkenly from quarter to quarter. While the score inflated, there was only way to rationalize it all:

Davis Bertans, who was reportedly told by the league that he didn’t receive Three-Point Contest consideration for All-Star weekend due to a low number of three-pointers (despite leading the league percentage), attempted 12 on Tuesday, knocking down 5 of them, including one with 33 seconds left. Bertans made the most of his starting opportunity and 36 minutes of playing time, totaling 18 points, 5 rebounds and, somehow, a career-best 4 steals.

But even Bertans’ final trey, which put the Spurs up 4 with only 33 seconds left, meant little after another San Antonio mistake — this one on a mucked inbound pass while up 2 — led to an easy Suns basket in transition, leaving the Spurs suddenly fighting to survive against one of the league’s worst teams at home.

On that final play the original intent behind Kokoškov’s cry burbled back to the surface, as the Spurs’ Rudy Gay reverted back to what he knew best. Taking a screen from Aldridge, Gay dribbled into one of the most maligned shots of the modern age, a contested two at the elbow that couldn’t have been defended any better. On a night where neither team could miss, the shot hit nothing but net, prompting an ecstatic crowd that didn’t expect to reach such levels of ecstasy coming to rain cheers as Gay’s teammates mobbed him at center court.

While a cacophony of car horns celebrating the result sounded in the parking lot of the AT&T Center on a cold San Antonio night, it was a chillier mood right outside the Spurs’ locker room, as a displeased Gregg Popovich appeared before the media only long enough to say his team was “outcoached”, “outplayed”, “out-executed”, showed “no respect for the game”, and put up a “pathetic performance,” took no questions, and left a crowd of reporters there to dwell on it all.

Rudy Gay on the win

Gay (16 points, 5 rebounds, 5 assists) didn’t quite echo his coach’s negative outlook on the game, although he did recognize that this team is probably better than just eking out a narrow victory over the Suns.

“It’s a win. I’m not happy about how it happened, but we got the win, and that’s part of being a good team. We gotta find ways to get better.”

Did he agree with Pop’s “pathetic” assessment of their performance?

“You think I’m gonna say that? I’m happy we got the win. Just have to be better next time.”

White had 13 points in the first half and 15 in the game, chipping in 7 rebounds, 3 assists and 2 steals. Here’s Pop on the young guard, speaking before the game:

Pop on the method behind his quick-trigger timeouts

“I think sometimes doing something dramatic, like a quick timeout or showing a little bit of anger about not being able to do a simple thing helps them focus more and understand that it is important. So in the end, lessons get learned.”

Belinelli continued his hot stretch by dropping another 17 points on Tuesday. He’s averaged over 15 points on over 50% shooting through the last 11 games.